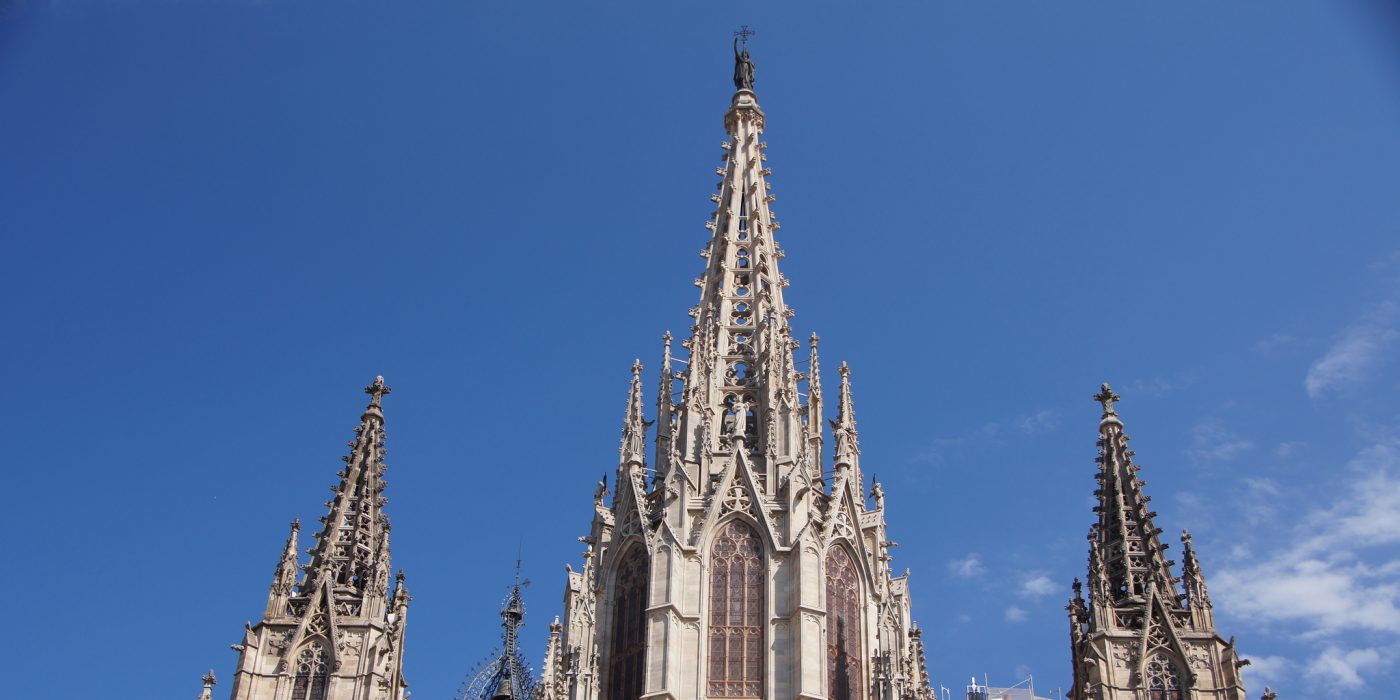 Time to start filling in those pews again.

The French government’s decision last year to demolish 2,800 churches across the country is a dark omen for the West; especially when much better-attended mosques are given luxury renovations.  Whether you are a Theist or not, for the state to destroy exquisite Neo-Gothic architecture is an attack on Western civilization and a manifestation of our utter disconnect from our ancestors.  Meanwhile, across the Channel, the Church of England cash crisis spells a similar end to English cathedrals.  But how do Alt-Righters feel about this?

Many, of course, see Christianity as a big mistake – an oriental religion which was imposed on our ancestors by the sword; after all, it has gradually feminised our men into pathological altruism.  Yet, others meme, ‘Deus Vult!’ and hope the next Pope will act as the voice of Europeans who want an end to the mass immigration, which is destabilising homogeneity and radically changing national character.  Many insist that the alt-right should rather aim to reform liberalism and leave behind the significant role of the Church in the history and development of Europe.  After all, liberalism has dominated the West for centuries now, including Christianity.  Therefore, it is asserted that we should push race-realism and attack liberalism’s core tenet of hyper-individualism.  If people still need religion, they should look to the Pagan religions of their forefathers which didn’t teach any of this ‘turn the other cheek’ nonsense.

I, however, find this to be a very disjointed view of all three movements – Paganism, Christianity and liberalism.  They are so intrinsically linked in Western history that, for one to be reformed, would require the reformation of them all.  For instance, when I think of liberalism, I do not necessarily think of the modern hyper-individualist, globalist democracy, reducing man to a mere economic unit and promoting cultural Marxism worldwide; I think of the development of libertarian systems of law, uniquely produced by Europeans – systematic and rational systems of law, descended from the libertarian primus inter pares of the Indo-European aristocracies of old.  And which institution produced Western law privately?  The Church.  But, the essential tie which binds the faith to a reformed liberalism is stronger than this.

Answer this: what fundamentally needs to be reformed in liberalism?

As Alexander Dugin has identified in his ‘fourth political theory’, the historical subject of liberalism proper (whether classical or modern) is the individual, to liberate her from everything that was external to her (faith, tradition, authority).  The consequences of this hyper-individualistic liberalism are mapped nicely by Alex Kurtagic in his review of Dugin’s The Fourth Political Theory, ‘Unthinking Liberalism’:

In a nutshell, no Church – no hierarchy, no natural order.  Sure, the libertarian values of Europeans as developed by the Romanised, Germanised Church sought to strike a balance between the power of the proud paterfamilias of the Northern tribesman and the sovereign.  The common conscience could not allow a father the right to brutalise his wife, children and slaves; their defence by the king was only an obligation and afforded him no superior rights, as ensured by the Church.  But, as Kuehnelt-Leddihn demonstrated in his great works, especially Liberty or Equality, equity and equality are not synonymous – this sort of legal liberalism was in no way egalitarian, democratic or leftist.

On the contrary, the political aim of the Church was the natural order, as opposed to the artificial equality of tyrannical democracy or the artificial inequality of tyrannical oligarchies (the broad-brush typically used to depict all of medieval history).  On the subject of political power, Pope Benedict XVI asserted that the Church ‘forms the only definitive protection against the power of the collective and at the same time implies the complete abolition of any idea of exclusiveness in humanity as a whole.’  No strong Church – no strong platform to reform liberalism.

Furthermore, the Church satisfies our inherent sense of transcendence, something liberalism can never do.  We cannot think in terms of ‘if’ our people need religion; religion is a social necessity.  Indeed, in Maslow’s hierarchy of needs, self-transcendence is that highest of attainments which our species yearns for.  This makes the Church our silver bullet against liberalism.

In its current form, soulless and without our noblest of human needs being met, liberalism has caused the West to lose its culture and its common conscience toward one’s folk or even immediate family.  Today, the ideal man is a mere economic unit with increasingly bizarre and degenerate peripheral quirks invented to pathetically garner some semblance of an identity.  The ideal man of the Church is the knight or warrior-king who was a gentleman towards his people – all of his people – but ready to protect them from outside threats.

But isn’t Christianity too weak to handle the threats the West faces today, within and without?

To begin, I’m just going to dismiss all contradictory arguments made by Pagans, such as that Christianity was both really mean in taking power over Europe but is also too pacifist to defend Europe; or that Christianity is an effeminate slave ethic, for there’s nothing more masculine than taking care of your people and treating them like family.  These arguments are not intellectually consistent.

Of course, the pros and cons of the Church’s influence in Western development must be weighed.  For instance, without the Church, a unified Europe with a transcendent, long-term vision to harness the Faustian spirit is unthinkable – this is best illustrated by the heaven-conquering gothic cathedrals which dominated the continent.  But, whilst Belloc could quite rightly say that ‘Europe is the faith, and the faith is Europe’, the same universalist spirit which united Europe comes from a Church which does not distinguish herself as an exclusively European religion.  The chief complaint is that the Church was never designed to focus on such natural identitarian instincts, as did Paganism.

It is impossible to ignore the fact that Christianity is a universal religion for every tribe, tongue, people and nation, to paraphrase The Revelation.  However, this does not contradict where the New Testament writers speak of ethnonationalism, nor instances where early church fathers, such as Tertullian or Augustine, write of the same.  Contrary to popular belief, the Romans were thoroughly ethno-nationalistic; such considerations were ubiquitous for the early Church.  In traditional Roman Christianity, the spiritual and temporal swords (the Church and the state) are not one and the same; it’s not the place of the Church to implement an immigration policy for the good of the people (although they have often pushed to expel certain groups).  Nevertheless, Christianity has evolved for centuries to become a thoroughly European religion.

Even before the rise of Christianity, the influence of Indo-European and Indo-Aryan religions on Judaism was enormous.  The myths of Genesis, monotheism, angels and demons, heaven and hell, spiritual warfare and even messianism – all were developed from ‘the white man’s’ religions.  Many have written of the influences of neighbouring Near-Eastern groups, especially the Persians, on Judaism, but Hengel’s work on the Hellenisation of Judaism, following the conquests of Alexander the Great, shows how the all-pervasive influence of Greek civilization on the region paved the way for the rise of Christianity.

First-century Judea was rife with Hebrew supremacism and rebellion against Rome.  But those who would transcend beyond this, submit to Caesar and seek an abstract, ideal kingdom would be saved from the destruction which was to come upon Jerusalem, during the Jewish-Roman Wars.  It was these very Indo-European elements of Christianity, crystallised in a way, which made it so appealing to Europeans.  And, for centuries since, we have been making it our own.

Everywhere we look in Catholicism, we see a thoroughly Romanised religion and institution.  Of course, the influence of Greek philosophy, especially Aristotle, cannot be ignored.  Moreover, the ‘Germanization’ of early medieval Christianity in Europe, as expounded by James C. Russell, is just as big a milestone in the development of the European Church.  Yet, how many of us see it as our own?

Whilst Eastern Europeans have returned to their churches, understanding that the Church represents our most powerful cultural technology for fighting the daily mounting threats to European civilization, we take her for granted.  They emerged from the ashes of communism with this lesson, yet Alt-Righters sit at their computers, mourning a lack of like-minded community, while our churches are being physically destroyed for lack of attendance, except for old ladies and third-worlders.  The Church has saved us before from the threats we now face and it’s staring us in the face now as our best solution.