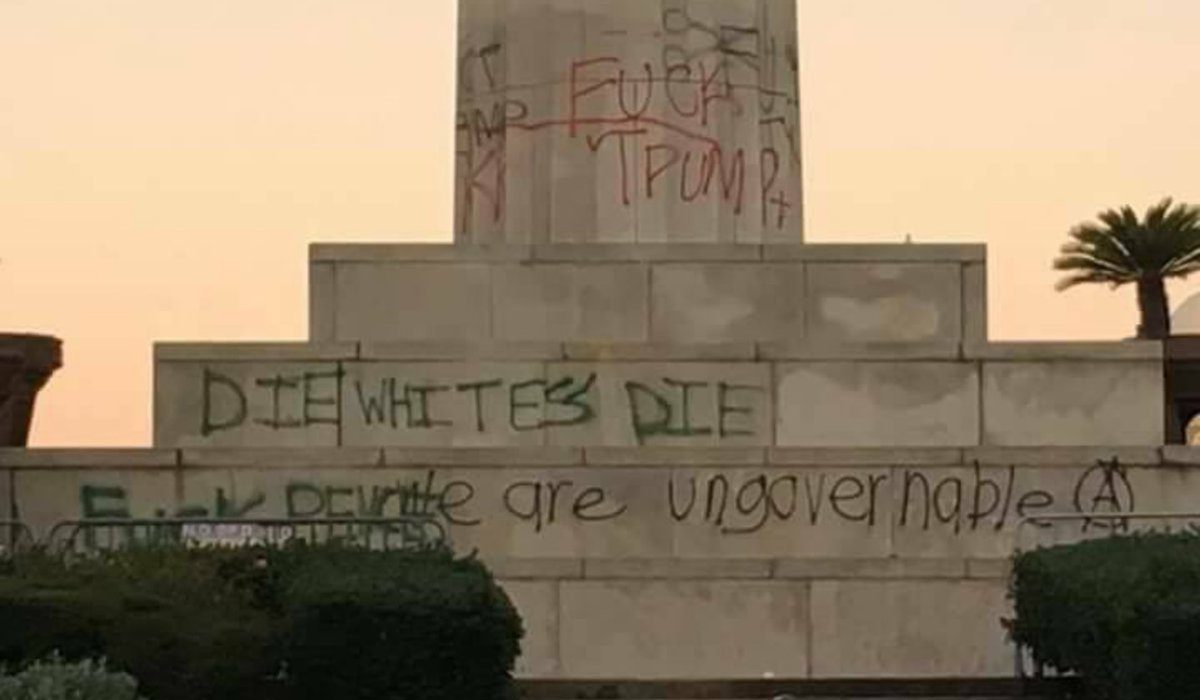 First they came for the Confederates.

This is deeply disgusting on so many levels:

“On the same day that some southern states were honoring their rebel heritage, masked workers in New Orleans dismantled a monument to that past — chunk by chunk, under darkness and the protection of police snipers.

“We will no longer allow the Confederacy to literally be put on a pedestal,” Mayor Mitch Landrieu (D) said after a 19th-century obelisk honoring what the mayor called “white supremacists” was taken down early Monday. …

After a small group of protesters dispersed about 1:30 a.m., police officers barricaded surrounding streets, and snipers took position on a rooftop above the statue, according to the Times-Picayune. By 3 a.m., workers were drilling into the obelisk’s pale stonework.

Contractors wore face masks, helmets and what one reporter described at a news conference the next morning as “militarylike bulletproof vests.” Landrieu said the workers were disguised for their protection. …”

What lessons can we draw from this?

1.) We stayed out of these heritage fights for a reason. We wanted to illustrate that groups like the SCV are incapable of preserving our heritage with their preferred methods. I’m sorry, but all these fanciful stories about millions of “Black Confederates” are just a waste of time.

2.) The removal of the Confederate monuments in New Orleans is a direct result of multiracial democracy. This is just one of the consequences of black majority rule. The violent crime you see in New Orleans, the terrible public schools, the blight, the corruption and other indicators of civic failure are also features of black majority rule. See also Memphis and Birmingham.

3.) We’re often told that multiracial politics isn’t “a zero sum game.” Yes, it is! In a multiracial democracy, someone will always rule. Racial demographics will determine who rules.

4.) The Confederate monuments in New Orleans have been repeatedly tagged with graffiti like “Die Whites Die.” In a multiracial democracy, those sentiments will be reflected in municipal politics. That’s because there isn’t a single people, but several races with different identities.

5.) In Charlottesville, Virginia, we see a similar effort to remove the Lee and Jackson statues. The moral of the story is the same there: Southern heritage won’t survive without the Southern people. If you import aliens and transplants who don’t share your identity, they will be empowered to transform the public landscape in their own image at your expense.

6.) Conservatives are too weak to preserve our heritage. They are too beholden to business interests. In South Carolina, the Chamber of Commerce engineered the removal of the Confederate flag by using the Dylann Roof shooting as an excuse to do what they had always wanted to do.

7.) All of these Confederate monuments were erected by a strong people with a healthy and positive sense of ethnic and cultural identity. They are being torn down because our people have lost their sense of identity. We’re now just a bunch of atomized individuals. We’re nothing more than consumers with appetites. We’re taught in our public schools to have a purely negative sense of identity.