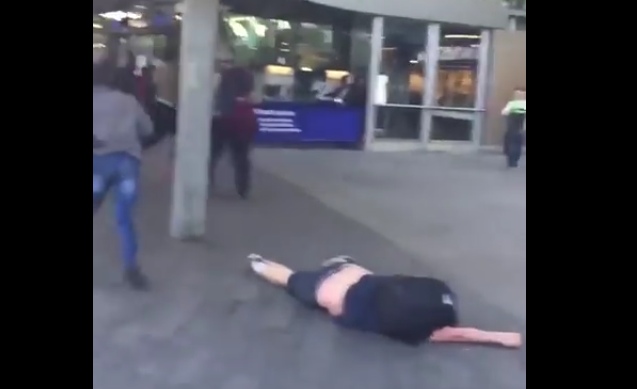 East London Is One Big No-Go Zone For Whites

Yet another day and yet another vibrant attack. Blacks don't need bombs or Allah to ruin a city.

This video shows what happens when a vibrant force meets a soft White object.

You will notice several things from the video. First and foremost is how badly the Whites defend themselves in this video AND how no one else defends them either:

At about the 15-second mark, another White guy comes into the frame. He watches on and does nothing. This is normal. After all, we are all rational, enlightened individuals in the West. While groups of Blacks seem to instinctively understand that it’s them vs the pale-skins, random White bystanders do not lift a finger.

But perhaps I am being too harsh. After the second White man is knocked out, some fashionable metrosexual Londoner comes to his aid, makes himself look big by waving his arms around and dissuading the Dindus from finishing off their kill.

By the end of the video, victim #1 is sprawled out on the ground with a crowd gathered around him. It even looks like some of his attackers squat down to snap a pic. The video pans out to the crowd that has gathered around the first felled White guy. It is overwhelmingly black. A quick look at the demographic data around Maryland Station, in Newham (where this attack occurred) and the London Borough reveals what could already be easily guessed. This is a very diverse area. It is part of East London’s sprawling greater immigrant suburb.

It even makes it onto the Mirror’s list of crime hotspots.

Speaking of crime hotspots, you can’t do nice SWPLy things like have marathons when you reach critical Dindu mass.

The time for wishing and hoping that the Diversity will go away is long past. These invaders are not leaving anytime soon, and for any White unlucky enough to not be able to afford White Flight, this is the reality that they will have to face day in and day out. These videos show the reality of what Diversity truly means for those Whites that are left behind.

For Whites not lucky enough to live in the White parts of town, it’s time to start getting tough and thinking tribal. Enlightened rational individualism will not save you, but boxing classes and ethnic solidarity might.

What is even more maddening is the knowledge that for the first time in history, we can document and catalogue what could only be conveyed in the past through gossip or the crime section of the evening newspaper. Easily available alternative media and unfiltered primary sources are all just a click away in the West. A quick trip to Liveleak will show hundreds of similar videos from East London, the suburbs of Paris, American Ghettos, or Husby and Rinkeby in Sweden to the curious web surfer.

There’s simply no excuse for getting caught with your guard down anymore.