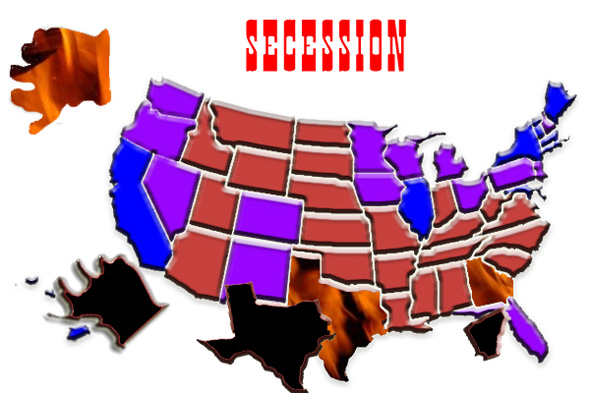 We're already divided, and its not going to get any better. Secession lies in the near future of the United States.

People on the left made this critique throughout 2016: you can only Make America Great Again for “old white men.” This is absurd of course, but it touched on a deeper fear held by many on the left, and that I suspect is at least sensed by many on the right. Go to any major city, find someone under thirty, and ask what the words “freedom” and “liberty” mean.

Let’s look at two amendments in particular, the second and fourteenth. The second amendment guarantees all Americans the right to keep and bear arms. The fourteenth guarantees us equal protection under the law.

The left hates the second amendment. To be honest I’m not exactly sure why, and I’m not much of a conspiracy theorist. So for me it is enough to understand they want to repeal at least most of it. They’ve used the courts in the past, and they exploit every gun related tragedy as an opportunity to perhaps win a few more to their cause.

But the language of the second amendment is clear, even if we’ve made a few compromises about felons and background checks. Yet the argument from the left persists: the founders didn’t know we’d have AR-15s therefore they should not be protected, only muskets should be protected.

My favorite rebuttal to this lately has been “Oh well if the framers only intended for their contemporary technology to be covered under the law then certainly we’ll apply that logic to the fourteenth amendment and reverse gay marriage. I mean post-Civil War America had to pass a law protecting blacks from being disenfranchised and mistreated. Clearly, they didn’t intend for it to apply to twenty-first century gays. Right?”

But consistency of argument when it comes to ideas like liberty, justice, equality has fallen prey to the Cold War era left/right political divide.

See here is the thing, America has a different history depending on what part of the country you are in. Liberty to a gay actor from West Hollywood does not mean the same thing as it does to a religious homeschooling couple from Oklahoma. Words so integral to the foundation of America as “rights” and “equality” have come to mean very different things as the demographics have changed, and as the voting franchise has expanded.

There is such a thing as Southern culture. There is such a thing as Texas music and cuisine. New England is a very different place than California, though they generally vote the same way. Why deny this? Why not celebrate it. I enjoy visiting other states, but frankly I wouldn’t want to live in most of them. There is tension, there is anger. People feel as if in this republic they don’t count. And indeed they are kind of right. The 2016 presidential election was decided by a few million white people in four states.

I think a lot of people sense this, but can’t yet articulate it. We are a nation “divided by a common language.” And I think we need to take this seriously.

At one point in my life looking at the American Constitution filled me with pride. I understood it to be a wonderful document; it spoke to people for hundreds of years. It inspired people to seek national sovereignty everywhere from France to Vietnam. But to hear American millennial college students speak you would think it was designed to create systematic oppression of all non-cishet white males.

There were a lot of angry people in America in 2008. Bush had left a sour taste in the mouth of the right, and the left believed he was Literally Hitler. So the left and a few moderates went all in on “Hope and Change” for eight years. It was a nice slogan but what exactly was it the left wanted to change?

After eight years of what I’m sure historians will call a failed presidency, Obama and his supporters are left rallying around Obamacare – a policy designed by conservative think tanks to slow the move towards a national single payer healthcare system.

Black Americans’ anger led them to rioting. Statistics about likelihood of being shot by a cop be damned, there was a lot of rage bubbling under the surface in the black community. After eight years of lies and failure to change their lives the Black Lives Matter supporters seem to have come to the conclusion that Obama wasn’t on their side. Indeed the smarter members of the movement have long recognized that Obama had more in common with Bush than he did with Trayvon Marin.

In 2012 Texas secessionists submitted a petition to the newly re-elected Obama. The right was mocked and harassed by the left in the Legacy Media for insisting it could do what had been “decided” in 1865. And it achieved nothing, but it sent the point to him that he was the president of a divided America. With Calexit Trump’s administration is getting the same message, often from the same people who mocked Texans in their desire to leave the union.

So let’s ask the question, why can’t we peacefully divide our nation?

Throw in the tensions between New England and the South and you’ve got a recipe for major anger and hatred between Americans who, prior to the 1960s, could generally be counted on to settle their political differences peacefully.

I’m not a secessionist in the historical definition of the term. I do not believe that “the South shall rise again.” But I believe in peaceful separation. I think the time has come for America to have a serious conversation about our identity as a people.

Separation does not mean we have to destroy the interstate or start sinking our military’s ships. It’s possible to have mutual defense agreements and mutual trade agreements. Most of your life simply won’t change when (not if, but when) separation occurs.

As our demography changes, and not just racially, but also generationally, religiously, and financially, the different regions of the country need to be free to pursue policies that reflect their values, and that are in the best interest of their people.

Everitt Foster holds a Bachelor’s degree in geology, an MA in military history. He is an expert in modern military history, specifically wars of the 20th Century. He blogs at www.anaturalreaction.com He is also a novelist, having published two novels and a collection of short stories all dealing with issues such as nationalism and traditionalism. He is currently working on his fourth book and will soon launch a short story web magazine called Uprising Review which focuses on diversity of ideas rather than diversity quotas.