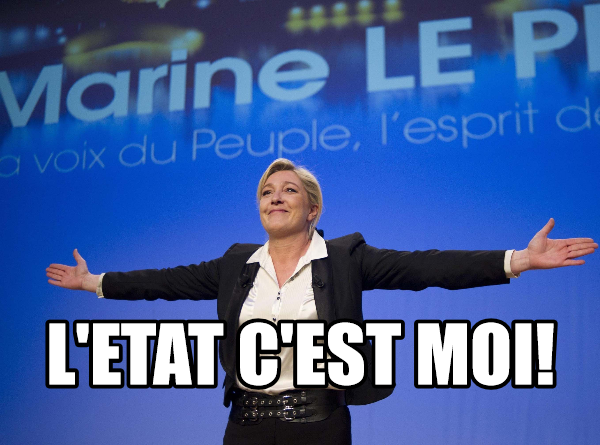 Short of a miracle, Emmanuel Macron is the next president of France.

If you haven’t been following the French Presidential Election, here’s a livestream to get you up to speed.

Le Pen has come out in second place and therefore qualifies for Round Two. This is a historic development. Her father made it to the second round once as well. Every other party rallied to defeat his party.

However, everybody in the political establishment and every other party has asked their people to vote for Macron against Le Pen.

The battle will come down to the Cuck Right vs the Far Right. The odds are heavily in favor of Macron. Le Pen stands alone. France24 keeps repeating that Macron is de facto the next president.

And who is Macron exactly?

Reportedly becoming a millionaire, he left in 2012 for a senior position in Mr Hollande’s staff, deputy secretary-general at the Elysee Palace.

His climb up the establishment ladder continued in 2014 when then prime minister Manuel Valls made him minister for the economy.

Mr Macron’s bid for the presidency began last year when he ditched Mr Hollande’s Socialist Party and established his own independent movement, En Marche! (On the Move).

He recruited thousands of volunteers to knock on doors during the summer to hear people’s ideas and opinions and En Marche! has whipped up impressive support.

For the first time, a recent poll put him just ahead of Marine Le Pen in the first round of the election in April. In the second round head to head against the far-right candidate, he is predicted to win 65% to 25%.

Mr Macron’s surge and his belief in the EU and a strong Europe has made him a “fake news” target for Russian media, his party chief claims.

Well that sends up some red flags…

Meanwhile, Antifa is rioting in Paris. Russian election hackers are streaming it: