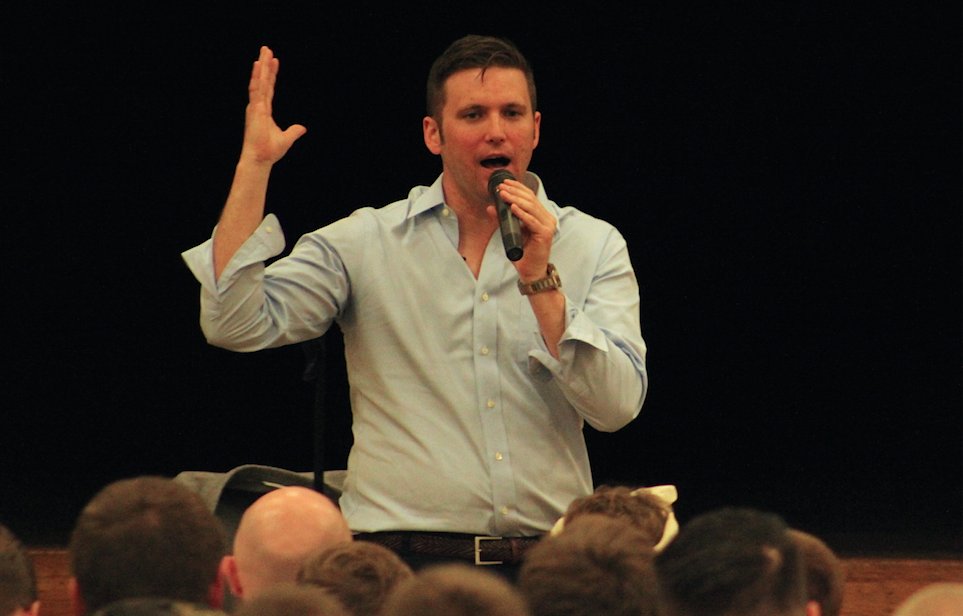 The Alt-Right Comes To Auburn

I’ve summed my thoughts on everything that transpired in Auburn:

1.) Antifa – Heading into Auburn, I was dismissive of the threat posed by antifa. From my experience with the League of the South and Identity Dixie, I didn’t have any reason to believe there were more than a few dozen Atlanta Antifa. I doubted many of them would travel to Alabama:

This is our Atlanta Antifa friend Seth Miles Waldon from #Auburn. You may recognize him. His bloodied face is all over the media pic.twitter.com/QxXciTgaUf

Benji Lee Hansen of Birmingham, AL is an antifa tranny who likes to hit our people with padlocks in Auburn: pic.twitter.com/hGJh4gSCxk

The face of Auburn pic.twitter.com/bcx02GMoWF

This Atlanta Antifa came to #Auburn dressed like a Power Ranger pic.twitter.com/djhBJRWqsT

The antifa in Auburn were drastically outnumbered by the Alt-Right. They managed to attack one of our guys who arrived late while the rest of us were already either inside Foy Hall or in line behind the barricades. In a 4-on-1 fight, he managed to do this to them all by himself. The bloodied face of Seth Miles Waldon was plastered all over local, state and national media.

We’ve already doxxed two of the antifa who were arrested in Auburn. Because they were unmasked by the Auburn police, I’m told that we now have the rest of their names along with other information about them. We will be publishing that soon. It seems that many of them are isolated individuals who came to Auburn from across the region. They are not all based in Atlanta.

Antifas are a paper tiger in the South. Even in Atlanta, there aren’t more than a few dozen of them and they came to Auburn with everything they had to stop Richard Spencer. The threat posed by antifa violence in the South can be neutralized through unmasking, doxxing, networking and organizing. In particular, we ought to encourage bikers, Three Percenters and militias to come to our events.

By holding events like Auburn, one of our goals is to encourage our supporters from rural areas and small towns to come out and join us, organize and occupy public spaces and put an end to violent antifa trying to dominate our public universities. If we can do it in the Deep South and West Coast, we can do it anywhere.

2.) White Bloc – We called for a White Bloc to come to Auburn to neutralize the Black Bloc. In this respect, Auburn was also a major success. For the first time ever, we had people from every corner and faction of the movement turn out and come together to end the threat of antifa violence in a contested public space. The antifa were drastically outnumbered in Auburn which put a chill on their violence.

Moving forward, it is clear that we need to think more broadly and organize a Free Speech Bloc. When controversial speakers like Ann Coulter come to campuses like Berkeley, the Free Speech Bloc will deploy to provide security, occupy public spaces and act as a deterrent against antifa violence and intimidation. The Free Speech Bloc is only in its infancy and has massive growth potential.

3.) Disruption – As I listened to the Q&A session at Auburn, I kept thinking to myself: discourse controls thought, our discourse is excluded from public spaces like Auburn University, which is why we are politically and culturally marginalized, which is why I am sitting here listening to students parrot this nonsense, and this is also why all these antifa idiots are outside desperately trying to shut us down.

In his speech, Richard Spencer said that he believes words are powerful. We’re thinking on the same wavelength. By coming to Auburn, occupying Foy Hall and giving a wildly politically incorrect speech, we disrupted a norm and destabilized the status quo. In the end, their words and threats of violence weren’t able to dissuade us from this course of action. We accomplished what we set out to do.

4.) Political Correctness – Political correctness is a set of norms that narrows the range of permissible thought and utterances. It establishes what is sacred and profane. It is a cultural disease. The cure for this disease is to repeatedly challenge and shatter its norms in public spaces. If we want to break the grip of political correctness on college campuses, we have to go there and smash its idols.

5.) Organizing – Public events like Auburn are organizing and networking opportunities for the Alt-Right. By coming off the internet and establishing real world relationships, we strengthen our network. This is one reason why antifas try so hard to disrupt our events. We had lots of people show up in Auburn to defend Richard Spencer because of the history of our previous events in the region.

6.) Media Coverage – The Alt-Right got local, state and national media coverage because of Richard Spencer’s speech in Auburn. The spectacle in Auburn trended on social media for hours and will undoubtedly draw new people in the region to our side.

7.) Legal Victory – We owe free speech lawyer Sam Dickson a debt of gratitude. By far the most important victory in Auburn was the legal victory we won in defense of our constitutional right to free speech at public universities. This is a precedent that can be applied elsewhere. See Ann Coulter at Berkeley.

8.) The Speech – The major goal in Auburn was for Richard Spencer to deliver his speech at a public university in space occupied by the Alt-Right and leave unscathed. That’s exactly what happened. We exercised our constitutional rights while our opposition attempted to menace those rights.

9.) Charge of the Snowflake Brigade – As we were leaving Foy Hall, the crowd of snowflakes charged us and the mob ran through us and right past us. It was like being in a Southern snowstorm. No one was harmed and within minutes the snowflake crowd had melted and dispersed. When we started recharging our phones, we saw on social media that the narrative was that “the Alt-Right had been chased off campus.” In reality, we walked from Foy Hall to College Street, took a left on East Magnolia, walked down to Donahue, took another left and got into our vehicles in the parking lot in front of the stadium. We walked across half of Auburn’s campus.

10.) White Student Union – Before we arrived in Auburn, the White Student Union was already distributing fliers and Identity Evropa posters all over campus. The two sides were engaged in a flier war. Unlike Richard Spencer, I only live an hour away in Montgomery and can easily stay in contact with our people on the ground there. This wasn’t a one off event. We’re here to stay.

11.) Target Audience – Our target audience in Auburn was never the snowflakes who attended the speech or who gathered outside of Foy Hall. They were the foil. We were targeting the people who were silent, who weren’t there and who agreed with us. This is especially true of parents and alumni who are thinking about sending their kids to Auburn, but who are unaware of how our universities are changing and becoming more like Mizzou and Berkeley. When I was at Auburn, I didn’t go to any of these events but I watched them at my apartment. I was active on social media.

12.) Helping Each Other – Thanks to your contributions, I was able to buy hotel rooms both for myself and another friend who showed up in Auburn which made us stronger on the ground. The League of the South is raising money for our friend who got arrested after getting into a fight with antifa:

I don't have to tell you what to do pic.twitter.com/fB6by1JcvQ

Finally, Auburn is only the beginning. We’re going to see a lot more of this in the future. I can see it snowballing as more speeches on college campuses are booked, the Free Speech Bloc gathers and surrounds the speaker to neutralize antifas and organizing and networking takes place afterwards.