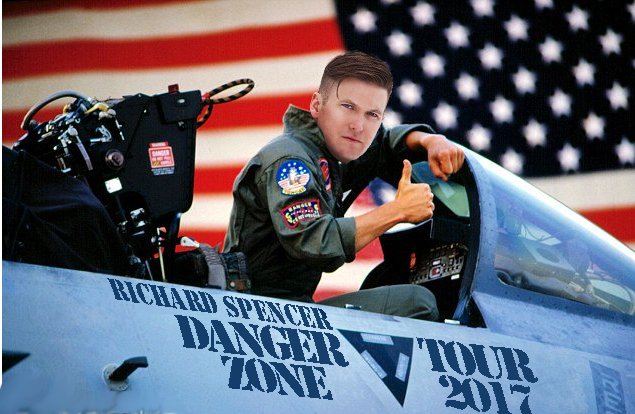 The inside story about what went down at Auburn.

Let’s start from the beginning.

Richard Spencer had been planning the speaking event for several months. It all started when he was contacted by Cameron Padjett, who had invited Richard, and rented the auditorium for 700 dollars. Richard took all the necessary precautions and offered to field the costs in terms of security. The team only found out on Friday that Auburn cancelled the event.

But on Friday, the 14th of April, the event was cancelled for security concerns by the university.

Richard made a Youtube video saying that he would give his talk anyway. What the university was doing was illegal because it was based on a Heckler’s Veto. If somebody threatens to say, blow up a bomb if a demonstration occurs, Federal or State authorities are obliged to provide security and not be intimidated by the threat of violence. It is considered a grievous injury to your personal free speech rights to be denied the right to speak because of a Heckler’s Veto.

Sam Dickson handled the legal angle. He put together a request for an emergency restraining order against the University. He argued that the rights of Cameron -the plaintiff- were being violated by the university because they allowed a Heckler’s Veto to get in the way of allowing the event to go forward. We also thank Greg, Eli, Matt, and Alexander for handling other crucial security details that day.

The night before the event, the Alt-Right team was at the hotel and making last minute preparations. Their location was revealed by the bartender at the hotel who went on his Facebook and revealed Richard’s location. This threw a wrench into the team’s plans as they were forced to leave the hotel early. But no lasting damage was done.

The trial was in Montgomery, Alabama at the Federal District Court, about one hour away from Auburn, Alabama at 1 pm on the day of the event. It was important to get the verdict for two reasons. The first was that if the judge failed to come through, Richard would be forced to give his speech outside, 100 meters away from where Antifa was expected to rally. This would almost certainly mean a brawl breaking out. The second was that the verdict would secure the cooperation of the police, who at that point were not working with Alt-Right team. The trial took about an hour, with 15 minutes for arguments, a 15 minute waiting period and a 5-minute verdict reading. Cameron was called to the stand and interrogated. Richard was also called to the stand by Sam Dickson.

Richard explained what Antifa was about, and brought up the Alabama anti-mask law. Richard made the point that Antifa used masks to get away with committing crimes. He demanded that the anti-mask laws be enforced.

The southern judge ruled in favor of the plaintiff after an incredibly weak argument made by the defense. They simply had no case. The team quickly rolled out and started driving to Auburn.

The police would have to cooperate, and the speech could happen inside, as planned.

About 150 Alt-Righters were in the auditorium for the speech, while some others were left stuck outside. They made up about 1/3 of the crowd in the room. Another 1/3 of the room was hostile.

While the speech was being made, Antifa showed up (bussed in from Birmingham and Atlanta) and didn’t do much. They weren’t allowed to wear masks and that neutered them. Many brought weapons that they didn’t get to use.

But they were a minority in the crowd. Many other groups showed up and held their own protests against Richard, like the SPLC. Classes were cancelled for the evening. About 2000 people showed up, but not all were there to protest. Some were just milling around and gawking at the spectacle. Unlike at Berkeley, the police was actually interested in maintaining order, and the situation remained stable.

After the speech, as it began to get dark, Richard Spencer and the team rolled out of the auditorium quickly and immediately drove away to Atlanta.

The Alt-Right came together to work like a well-oiled war machine. This was an amazing practice run. We have now proven first at Berkeley and now at Auburn that we cannot be stopped, cannot be silenced and are a force to be reckoned with.