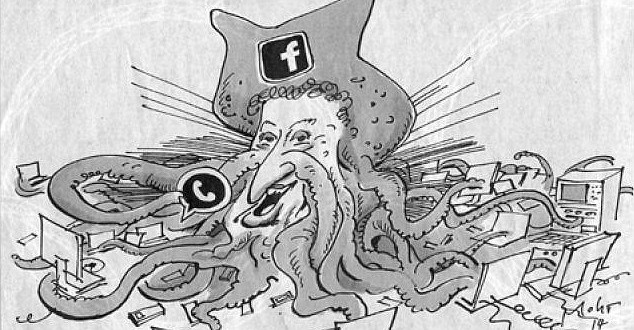 Zuckerberg is actively fighting news that "fragments our shared sense of reality."

From Zerohedge we have disturbing reports of more censorship by Facebook:

The first round of French elections will be held on April 23rd, prompting Facebook to shut down pro Le Pen accounts, which they deem to be ‘fake.’

In an effort to fight ‘fake news’ or misinformation, Facebook has targeted 30,000 ‘fake accounts’ in order to control the information that its users consume.

In a statement to AFP, the company said they were trying to “reduce the spread of material generated through inauthentic activity, including spam, misinformation, or other deceptive content that is often shared by creators of fake accounts.”

They are targeting accounts with the highest amount of traffic — since they pose a grave threat to the croissant eating frog lovers in France.

In addition to outright bans, the company, in conjunction with French media, are running ‘fact checking’ programs — designed to fight ‘fake news’, heightening their efforts around the elections — which spans from 4/23-5/7.

All of this hysteria happened after Hillary Clinton lost to Donald Trump’s twitter account this past November — prompting officials to pressure Facebook and Twitter to do something about the brazen belittling and subversion of the main stream media. Last week, the company launched a tool to help its users identify ‘fake news’ in 14 countries — including the U.S., France and Germany.

The talk about Internet ghettoization is one that the Alt-Right is intimately familiar with. Our accounts are routinely banned, suspended and occasionally shadow-banned as well.

When you have social media platforms as massive and influential as Facebook or Twitter, they can monopolize the social media commons. They can begin to tailor the information and opinions that most people are exposed to day in and day out. By banning Pro-Le Pen or Alt-Right accounts, they effectively cut out our opinions from the online public square. It is no different than King George banning lawful public demonstrations in the colonies. We become pushed into internet ghettos, containment sections of the web that only the most curious and independent thinkers can find.

Matt Drudge has commented on this phenomenon while being interviewed for the Alex Jones show:

Zuckerberg has been making big moves recently. Some have speculated that he is setting up a potential presidential run. He also released a manifesto about his vision for Facebook and the world.

It’s written in that bland, liberal college cookie-cutter language and style. But there are some interesting points here and there, especially about encouraging and fostering a “shared reality”:

Giving everyone a voice has historically been a very positive force for public discourse because it increases the diversity of ideas shared. But the past year has also shown it may fragment our shared sense of reality. It is our responsibility to amplify the good effects and mitigate the bad — to continue increasing diversity while strengthening our common understanding so our community can create the greatest positive impact on the world.

The two most discussed concerns this past year were about diversity of viewpoints we see (filter bubbles) and accuracy of information (fake news). I worry about these and we have studied them extensively, but I also worry there are even more powerful effects we must mitigate around sensationalism and polarization leading to a loss of common understanding.

Social media already provides more diverse viewpoints than traditional media ever has. Even if most of our friends are like us, we all know people with different interests, beliefs and backgrounds who expose us to different perspectives. Compared with getting our news from the same two or three TV networks or reading the same newspapers with their consistent editorial views, our networks on Facebook show us more diverse content.

But our goal must be to help people see a more complete picture, not just alternate perspectives. We must be careful how we do this. Research shows that some of the most obvious ideas, like showing people an article from the opposite perspective, actually deepen polarization by framing other perspectives as foreign. A more effective approach is to show a range of perspectives, let people see where their views are on a spectrum and come to a conclusion on what they think is right. Over time, our community will identify which sources provide a complete range of perspectives so that content will naturally surface more.

Accuracy of information is very important. We know there is misinformation and even outright hoax content on Facebook, and we take this very seriously. We’ve made progress fighting hoaxes the way we fight spam, but we have more work to do. We are proceeding carefully because there is not always a clear line between hoaxes, satire and opinion. In a free society, it’s important that people have the power to share their opinion, even if others think they’re wrong. Our approach will focus less on banning misinformation, and more on surfacing additional perspectives and information, including that fact checkers dispute an item’s accuracy.

While we have more work to do on information diversity and misinformation, I am even more focused on the impact of sensationalism and polarization, and the idea of building common understanding.

What Zuckerberg is interested in is manufacturing consensus. And Facebook will do it by artfully nudging out any red pilled content that shatters the reality they are trying to pitch. This is bigger than Le Pen or the Alt-Right. It’s a struggle against a future that looks like this: