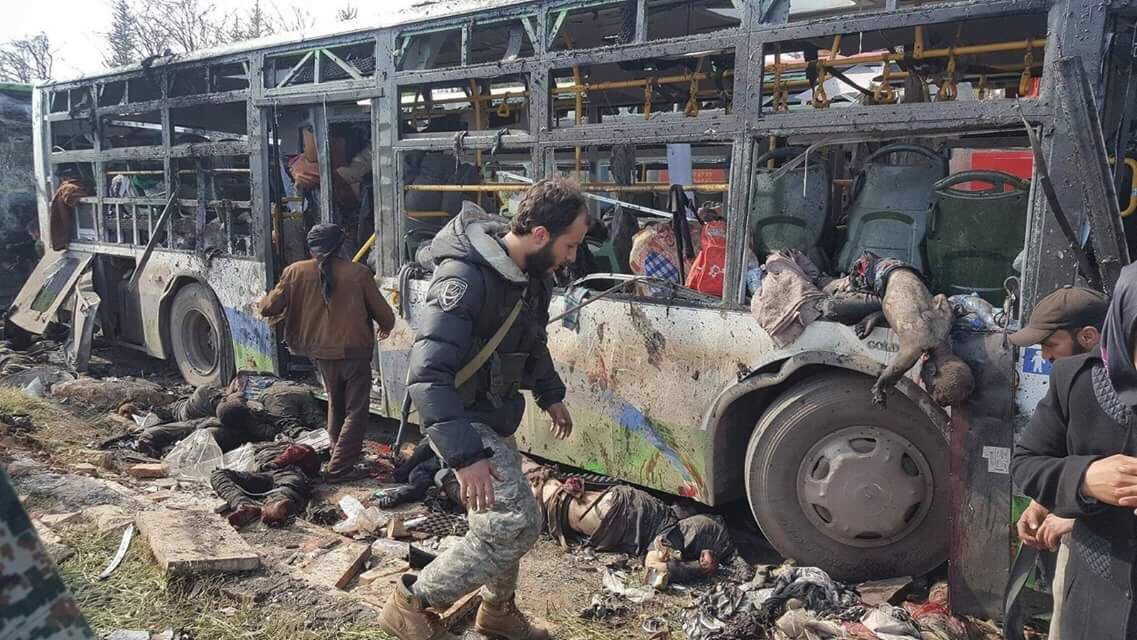 Take a hard look at what the “moderate rebels” did this morning in Syria:

“A bomb blast hit a bus convoy waiting to enter Aleppo on Saturday, killing and wounding dozens of people after an evacuation deal between Syria’s warring sides halted and stranded thousands at two transit points on the city outskirts.

Pro-Damascus media outlets said a suicide attacker had detonated a car bomb and killed at least 22 people. Images posted by the outlets showed bodies lying next to charred buses with their windows blown out, and flaming vehicles belching out thick black smoke.

The blast hit buses in the Rashidin area on Aleppo’s outskirts, which had been waiting to cross from rebel-held territory into the government-controlled city itself, carrying people evacuated from two Shi’ite villages on Friday.

The residents, alongside hundreds of pro-government fighters, had left the two rebel-besieged villages in northwest Idlib province under a deal where in exchange, hundreds of Sunni insurgents and their families moved out of a government-besieged area near Damascus. …”

BREAKING: “Moderate rebels” have attacked Shi’a civilians in Aleppo who were evacuated from the Fou’ah village in Idlib, #Syria. pic.twitter.com/AgsrGDa3li

This video won’t outrage anyone in the west because it was perpetrated by the sectarian terrorists they support in #Syria https://t.co/KHi6Him9XI

The US has sponsored terrorism against the Syrian people since the inception of this catastrophe. pic.twitter.com/o1Yx4maZDJ

We’ll see if the fucking hacks at CNN & the BBC cover this like the “sarin attack”. Or if that orange clown is moved by these dead children. https://t.co/lYSgtIRAB3