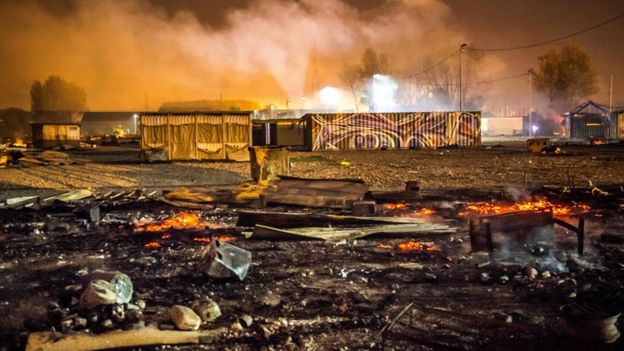 Migrant Camp Burns Down Over Afghan and Kurd Turf War

The migrant camps in Europe have a tendency to burn down periodically. The media likes to occasionally pin the blame on Nazis. And many patriots get hopeful at signs of resistance. But most of these incidents seem to be sparked by the immigrants themselves.

A camp housing 1,500 migrants in northern France has been destroyed in a fire that officials said began during a fight between Afghans and Kurds. At least 10 people were injured when the fire tore through closely-packed huts at the Grande-Synthe camp, near the port of Dunkirk. Last month officials said the camp would be dismantled because of unrest. The French north coast has been a magnet for migrants trying to reach Britain.”There is nothing left but a heap of ashes,” said Michel Lalande, prefect of France’s Nord region.

There have been several violent incidents at the Grande-Synthe camp, which was built by the charity MSF (Doctors Without Borders) and opened in March 2016. Six people were left injured with knife wounds after the fight that started the blaze. Police intervened last month after five men were injured in a fight, and another man was stabbed in November, AFP reported.

I wouldn’t be surprised if Doctors Without Borders ended up having an echo. These “charitable” organizations bring migrants in, they chimp out, and we have to hear that somehow White racism is to blame.

The migrants have been evacuated and will be sent to emergency accommodation, with two gymnasiums nearby already made available, Mr Lalande said.

So much for thinking about the children. I wouldn’t be surprised if some of these burnings weren’t done with an eye for more gibs. If the migrants know they can burn their camp down and then get an uprade in accomodations, doesn’t that create a problem of moral hazard?

Europe slumbers on. Things are still too comfortable. While the migrants fight among themselves, the situation remains relatively stable. But the migrants have demonstrated many times that they are willing to use violence. Can we say that Europeans still have that ability? After all, those who beat their swords into plowshares will plow for those who do not.