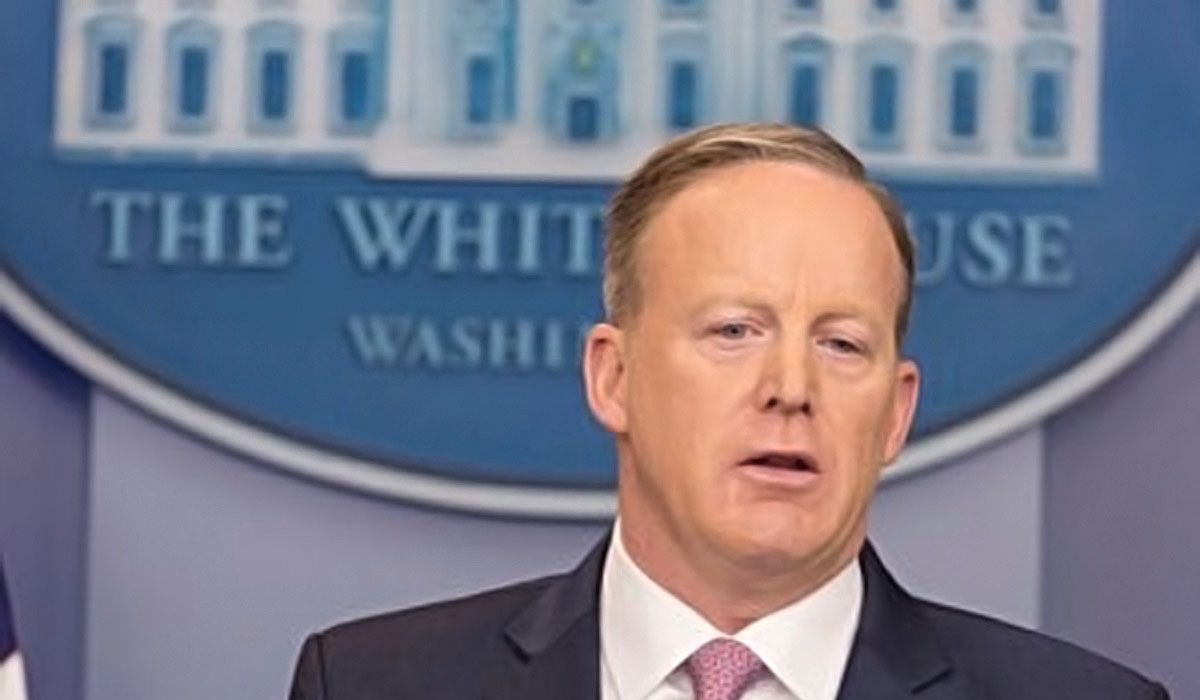 The White House Press Secretary Sean Spicer has come out with yet another bizarre statement about Syria:

SPICER: I think the president has been very clear that there are a number of lines that were crossed last week. He’s not going to sit down — you saw this with the last administration, they drew these red lines, and then the red lines were run over. … The answer is that if you gas a baby, if you put a barrel bomb into innocent people, I think you will see a response from this president. That is unacceptable. 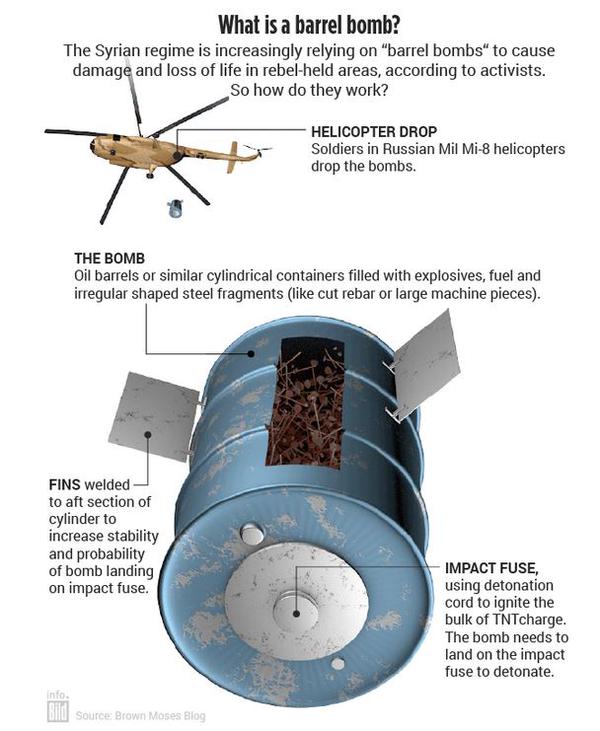 Does the use of nail bombs violate any international rules? Not that I’m aware of. The indiscriminate bombing of civilians certainly is, but laws regarding aerial bombardment are a bit lax.

To be legal, aerial operations must comply with the principles of humanitarian law: military necessity, distinction and proportionality. An attack or action must be intended to help in the military defeat of the enemy; it must be an attack on a military objective, and the harm caused to civilians or civilian property must be proportional and not excessive in relation to the concrete and direct military advantage anticipated.

Syrian President Bashar al-Assad could make the argument that his bombing operation fit all the necessary criteria. But the White House under former President Barack Obama and now President Donald Trump hasn’t been making legal arguments or demanding that the case of Assad’s aerial bombing campaign be taken to international court. They are simply tugging at the heartstrings of the American public. Whether it is the evil dictator gassing little kids or the sinister sounding barrel bombs, the playbook is the same.

They are not looking for proof; they are not trying to build a legal case; this is all just emotional manipulation.

But perhaps we are witnessing the next step in the 4D chess masterplan of Trump. If you unironically assume that the man is literally a God-Emperor then it all makes sense I suppose. Put your feet up and trust Trump — it is easier that way. Everyone is praising him for his humanitarian intervention after all, and the Russian accusations have been put to bed.

…if Trump’s new policy is indeed to respond by bombing Assad every time there’s a barrel bomb attack that kills civilians, then the US will have no choice but to bomb Assad every single day, in other words engage in all out war, whether it calls it that or not. What is further surprising is that this policy appears at odds with everything else the administration has said: all officials, including Spicer, have suggested the US doesn’t intend to topple Assad by force, and yet by lowering the bar so low, it assures that the US will be engaged in daily combat against Syria, and by implication, Russia which has shown no sign it will reduce its support for Assad.

Zerohedge offers an interesting explanation for this latest twist in the White House’s policy:

One simple explanation for this divergence is that Spicer doesn’t know what a barrel bomb is, and instead meant to say incendiary, or phosphorus, bombs.

On the other hand, if what Spicer said is true, then Trump has been palced in an awkward place, with his own press secretary declaring the use of a barrel bomb as the latest “red line”, the kind of bomb Assad is almost certain to use in forthcoming attacks against rebels.

Suggesting that the explanation is likely the former, according to Reuters, Spicer later said his mention of barrel bombs as a potential trigger for further action by the United States did not reflect a change in position.

Well there you have it, we can breathe again. It’s all ok now. Trump hasn’t changed his mind about Assad, he’s simply surrounded by incompetent team members! And Russia isn’t off the hook either. AP reports that some senior U.S. official believes that the Russians knew the attack was coming and then bombed the hospital where victims were being treated.

The United States has made a preliminary conclusion that Russia knew in advance of Syria’s chemical weapons attack last week, but has no proof of Moscow’s involvement, a senior U.S. official says. The official said Monday that that a drone operated by Russians was flying over a hospital as victims of the attack were rushing to get treatment. Hours after the drone left, a Russian-made fighter jet bombed the hospital in what American officials believe was an attempt to cover up the usage of chemical weapons. The U.S. official said the presence of the surveillance drone over the hospital couldn’t have been a coincidence, and that Russia must have known the chemical weapons attack was coming and that victims were seeking treatment.

Hold on a moment. Didn’t Russia already bomb the last hospital in Syria? 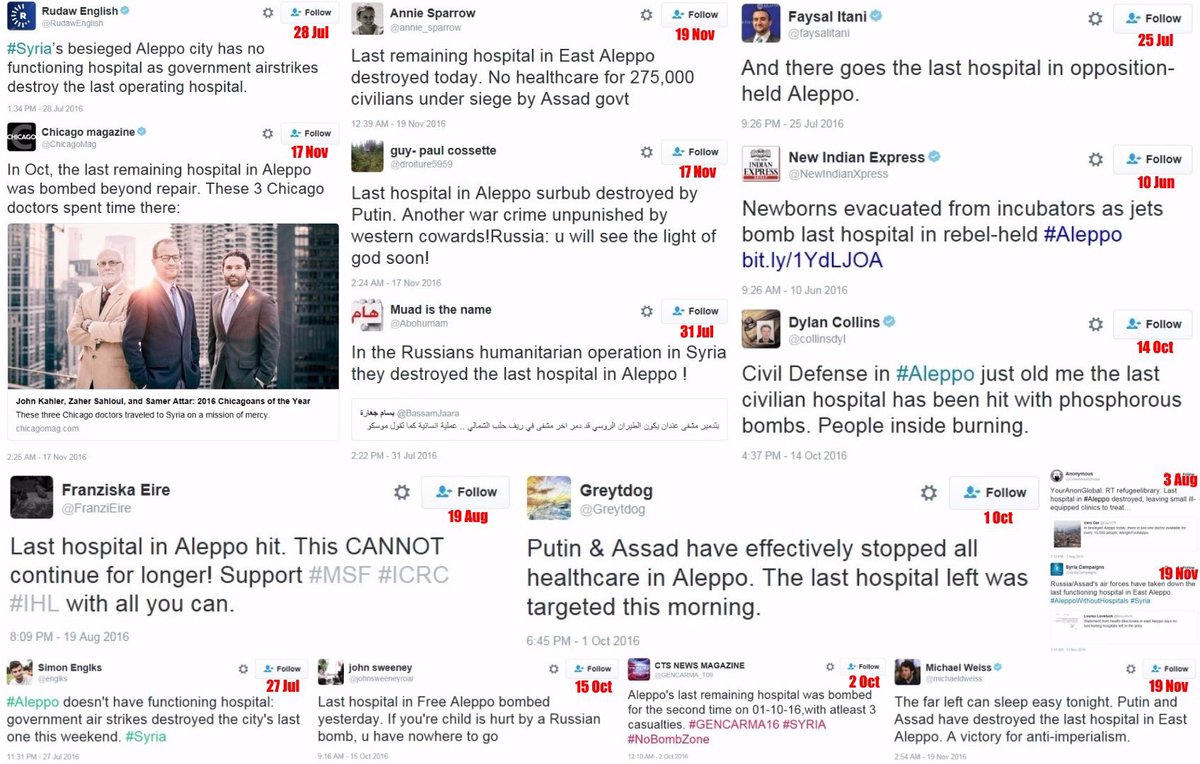