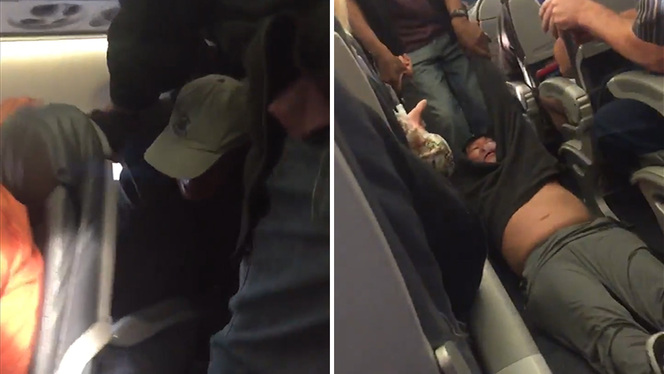 An Asian-American doctor refused to get off a United Airlines flight that was overbooked Sunday evening.

By doing so, he managed to spark a veritable Tiananmen Square-tier outpouring of customer disgust at the callousness of the corporate airline giant United Airlines.

Bridges said the man became “very upset” and said that he was a doctor who needed to see patients at a hospital in the morning. The manager told him that security would be called if he did not leave willingly, Bridges said, and the man said he was calling his lawyer. One security official came and spoke with him, and then another security officer came when he still refused. Then, she said, a third security official came on the plane and threw the passenger against the armrest before dragging him out of the plane.

This story has gone viral. Everyone is tweeting about it and debating whether the airline is in the wrong. But the real answer is that no one here is in the right. It is all one jaw-dropping dystopian caricature of modern America.

The video really is something. Can you really believe that this is the U.S.? I dont even know who to root for. It all feels too absurd.

Classic @United overbook #flight3411 and decided to force random passengers off the plane. Here's how they did it: pic.twitter.com/UaiSKz2bHD

This episode marks an important cultural moment. If there was ever a snapshot in time that encapsulated the American experiment, it would be this one right here. Of course, we can debate the details of what happened. United Airlines’ offer of 800$ worth of flight credit. The practice of overbooking. Customer compliance.

All of that is missing the bigger picture though.

Lets break it down. It starts with the people on the plane. Notice how fat everyone is in Wall-e land. Look at the complacent, dumb, doughboy mug of the passenger in front of the doctor. He looks around and smiles timidly at the figure hovering over him while blinking like a dumb cow. He has no idea that the Dindu Bossman is about to go full Harambe on the insolent doctor, but he’s got his safety belt on just in case. Pillsbury Doughboy looks put off by the violent thumping against his seat and belatedly turns his balding dome to peer over at the fracas. All three of the Dindus drag the screeching Asian man out of his seat and throw him head first into the adjacent arm rest.

The smartphone-wielding passengers recoil, and the ghastly overweight women shriek in horror at the sight of the doctor being dragged limply through the aisle. One Latino-looking man (also morbidly obese) applauds the officers with “police” written on their jackets as they drag the limp sack of meat down the aisle and out of the plane.

There is a second camera angle.

The high-empathy Americana soccer mom moans. The police’s treatment of the passenger shocks and horrifies her. “What are you doing?” she cries. Pointless effort on her part. The Dindus don’t even bat an eye as they shuffle by. Her chubby husband grumbles with a pained look on his white face. The Latinos have the same concerned face as their White neighbors, but they keep quiet.

America has become an observe and report society. The Asian man will get a huge settlement. Going through that humiliating ordeal will pay off in the long run. “Better to be tried by 12, then hung by 6” seems like a quaint linguistic and cultural relic of the cowboy era. “Better to be a victim, and wait for your settlement” works better nowadays.

My sympathies in this debauched farce lie with the obstinate Asian middle-class wrench in the machine.

The stark and uncomfortable modern flight experience best encapsulate the souls American corporate state. The TSA, the multiculti, and the small seats are a veritable cocktail of pozz that makes flying god-awful. Funny enough, that poor asian man simply traded the Communist Party of China for the Transportation and Safety Administration.