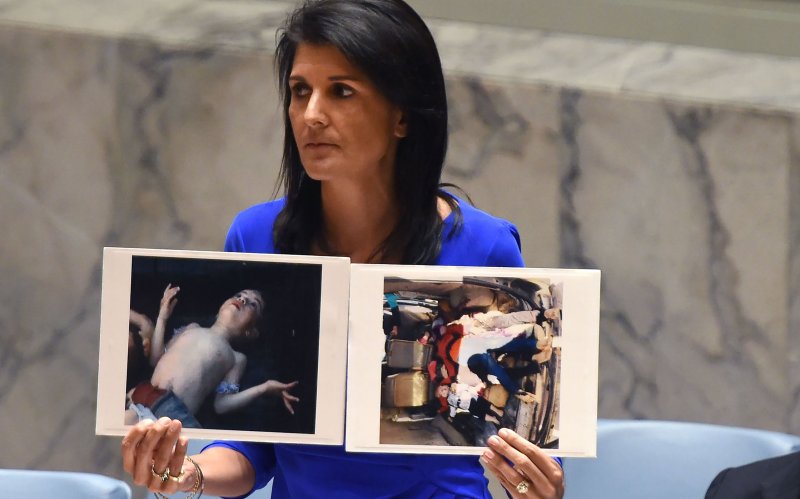 If you haven’t heard the news, the neocons are agitating for a new war in Syria:

“BEIRUT, Lebanon — One of the worst chemical bombings in Syria turned a northern rebel-held area into a toxic kill zone on Tuesday, inciting international outrage over the ever-increasing government impunity shown in the country’s six-year war.

Western leaders including President Trump blamed the Syrian government of President Bashar al-Assad and called on its patrons, Russia and Iran, to prevent a recurrence of what many described as a war crime.

Dozens of people, including children, died — some writhing, choking, gasping or foaming at the mouth — after breathing in poison that possibly contained a nerve agent or other banned chemicals, according to witnesses, doctors and rescue workers. …”

At the UN, Nimrata Haley went so far as to hold up photos of dead children to get a kneejerk emotional reaction and and to threaten an outright unilateral American intervention:

“UNITED NATIONS—Nikki Haley, the new (or “fresh,” as she’s often described here) American Ambassador at the United Nations had been seen by Turtle Bay insiders as more of a star politician than detail-oriented diplomacy wonk.

That may have changed Wednesday, when Haley acted as the president of the UN Security Council for the month of April at a moment of major international crisis. In an emergency session, she hinted that America could act unilaterally if the council failed to meaningfully address a horrific and deadly chemical attack in Syria.

She also inserted a particularly poignant paragraph to a proposed council resolution. If adopted by the 15-members, that provision could create a world of trouble to the regime of Syrian President Bashar al-Assad, and particularly to military officials responsible for the attack at Khan Shaykhun, an area in the southern part of Syria’s Idlib province. …”

“In six years of war, President Bashar al-Assad of Syria has overseen a campaign of carnage, turning an enormous cache of deadly weapons against the very people they were presumably stockpiled to protect.

In a campaign to crush rebels and jihadists, Mr. Assad and his allies have relied on tactics that go far beyond the norms of modern warfare to kill many thousands of Syrians. Here are the ways they have done it. …”

President Trump condemned Syrian President Bashar Assad in a press conference. We’re being railroaded into a new war in Syria by the neocons with lightning speed:

I don’t believe this President will make the same mistakes of his predecessor when it comes to Assad. #Syria

This is the moment for @POTUS to prove to everyone that when it comes to foreign policy & standing up to dictators, he is not Pres. Obama.

The Obama-Trump Syria policy is morally and strategically bankrupt.

There are lots of news stories, lots of big debates. They all pale in comparison to the horror of Syria. https://t.co/LPyS2CWyPF

.@thedailybeast: "Nikki Haley was dismissed as lightweight and a novice. BUT NOW THAT SHE WANTS ANOTHER MIDDLE EASTERN WAR…Not any more."

Another reason to #DefundNPR: they're calling for war in Syria https://t.co/UzWFzrATNn

Probably better just to (more or less) accept role of world's policeman, since you intervene earlier, when it's easier & save lots of lives. https://t.co/bO5upV15Aj

Note: I’ve heard credible reports from Ramzpaul and The Ralph Retort that YouTube is demonetizing their videos opposing American intervention in Syria for not being “advertiser-friendly.”