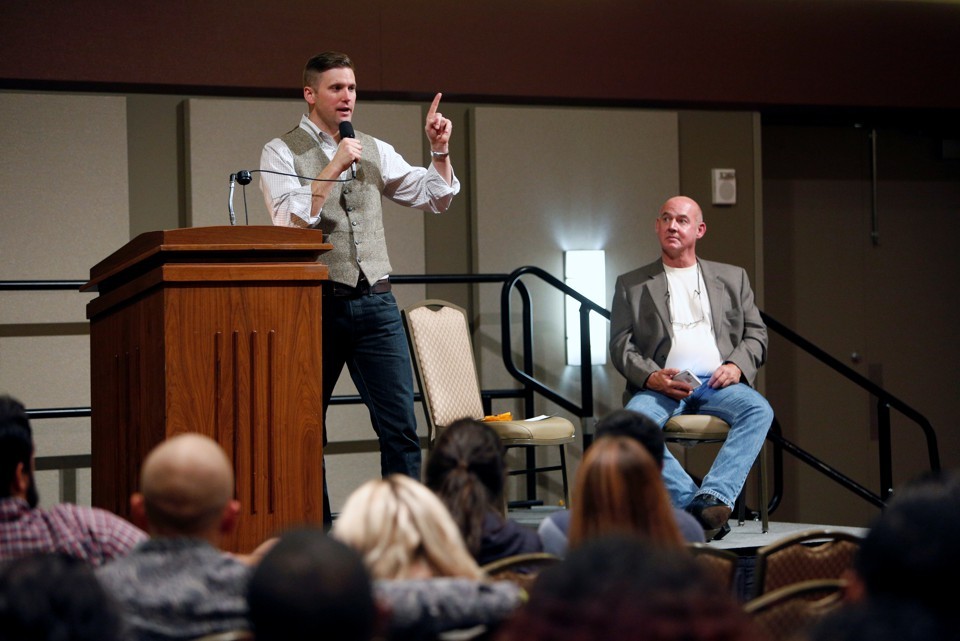 The Atlantic: The Alt-Right Curriculum

The Atlantic has published an article about how Jewish public school students in Boston are being taught about Richard Spencer and the Alt-Right:

“Dropping a handout with a photo on each student’s desk, the teacher Kathryn Leslie asked the teens to study the picture of Richard Spencer, the leader of the “alt-right” movement who advocates for a homeland just for whites. There was Spencer, the image of confidence, smiling in a suit coat and open-collared shirt as he leaned against a brick wall.

Does Spencer, Leslie asked her Brookline High School students, fit the stereotype of a white nationalist? Spencer had no visible tattoos advertising white pride or hate against non-whites or non-Christians. He also had graduated from college. …

Asked to react to the podcast, nearly every student raised a hand to offer an opinion. While many could understand how white nationalism might increase as a reaction to the country’s changing demographics, some were shocked to hear that Spencer would want whites to live in a separate country. Others said little surprised them, given personal experience with racism in Brookline, a town known for its liberal-progressive bent. …”

In 2017, The Atlantic is edited by Jeffrey Goldberg and David Frum. Since this is about a class on White identity, I think I will share an article from the February 1901 edition of The Atlantic by Hilary A. Herbert called “The Conditions of the Reconstruction Problem”:

“The dispensing of supplies without price to able-bodied persons must always tend to produce idleness: this tendency of its own work it was the especial duty of the Freedman’s Bureau to correct. The greatest crisis that ever occurred in the lives of four million people had arrived. Slavery had lifted the Southern negro to a plane of civilization never before attained by any large body of his race – had taught him to be law-abiding and industrious. If the guardians of this man, who was bewildered by his new surroundings, and who was clay, though unwashed clay, in the hands of the potter, had shown him the absolute necessity of continued industry the negro would have had at this critical moment the best chance of thrift that was ever to come to him. But, unluckily, this was not to be. Instead of being properly directed, the credulous freedman was in many instances encouraged in idleness, while he was deluded by false hopes …”

Hilary A. Herbert was a Secretary of the Navy under the Grover Cleveland administration. He fought for the Confederate Army and was a congressman from Alabama.

The moral of the story is that racial discourse is a product of its time and place. Richard Spencer’s racial views are milder than what The Atlantic was publishing in 1901. At the turn of the 20th century, the Alt-Right would have been well within the “mainstream” whereas Ta-Nehisi Coates would have been the “extremist.” Whiteness was something to be proud of at the time.

The great moral panic over “racism” was still several decades away. It was a product of the Second World War and Cold War. The legislation and cultural attitudes that came out of that era reflected a moment of hubris in American history when the United States was at the apex of its power.