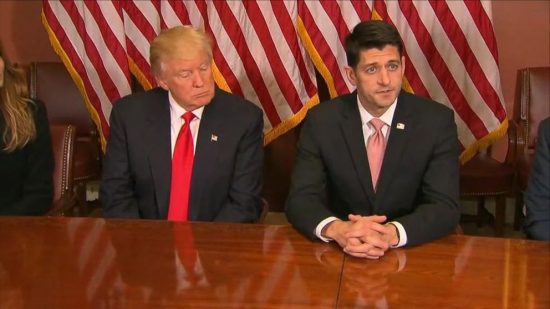 I’m not buying this narrative:

“THE series of columns I’ve been writing lately, floating implausible proposals for an ideologically unstable age, has been a useful way of avoiding the depressing subject of the Trump administration’s first 100 days — because really, in the face of such incompetence and chaos, what is there to say?

But precisely because this administration seems so hopeless, any constructive advice for the Trump White House automatically falls into the category of implausible ideas. So I can continue my ongoing series while also talking about Donald Trump — by proposing, as this week’s unlikely-to-happen proposal, that our president should go out and get himself a brain.

I do not mean a vat-grown cerebral cortex cooked up in some underground anti-aging lab funded by Silicon Valley immortalists … though I gather those may be soon available as well. I mean a brain in the sense that people (unkindly, but not inaccurately) used the term to describe Bill Kristol when he was the aide-de-camp to Vice President Dan Quayle 25 years ago: a person, or better a group of persons, who can tell Trump what specific policies he ought to support. …”

The Trump administration is about where I expected it would be in September.

President Trump is making a good faith effort to enact his agenda, but there is far more continuity than change because the system itself has failed. The Democrats in Congress are determined to block his agenda on every point. The #TruCons in Congress are incapable of governing. The federal courts continue to strip away power from the executive and legislative branches.

It is President Trump and a handful of likeminded advisors vs. Congress, the Lügenpresse, the Deep State and the federal judiciary. Even if President Trump had his own brain trust, all he is really capable of doing is issuing executive orders which are shredded by the courts. There aren’t enough Trump Republicans in Congress to push through a Trump New Deal level of change.

That’s why we are hearing nothing has changed on refugees, there might not be a border wall or a border tax. Nothing much has changed on foreign policy or healthcare either. It’s not for a lack of ideas or any lack of trying. It is because the office itself doesn’t have the power. In January and February, the narrative was that a whirlwind of change had hit Washington.

I suppose you could argue that things would be marginally better if President Trump had hired a bunch of Alt-Right staffers and chosen better cabinet picks. My view is that we would still be about where we are today because of fundamentals like extreme partisanship and polarization.