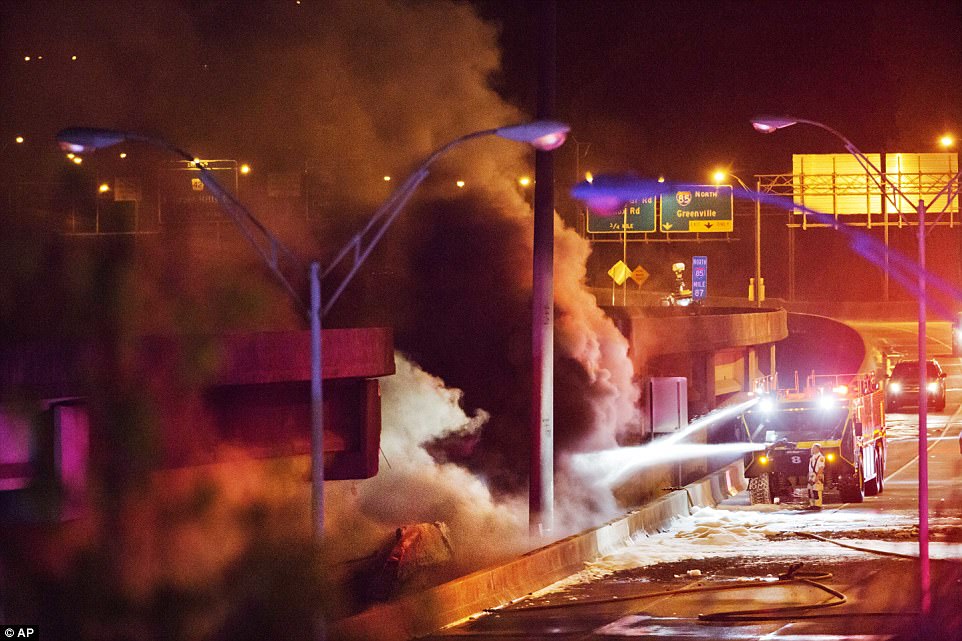 Homeless Crackhead Sets Fire Which Collapses I-85 In Atlanta

This story is highly symbolic of what we have become as a nation:

“A homeless man who is accused of causing an overpass to collapse on Interstate 85 in Atlanta because of a fire he set, was allegedly high on crack cocaine at the time.

Basil Eleby was one of three people arrested in connection with the massive blaze that broke out under an interstate in Atlanta on Thursday.

The 39-year-old with a rap sheet of 19 arrests, most of which are drug-related offenses, had been smoking crack before he ‘maliciously set’ the fire, according to a police report.

He was arrested along with Sophia Bruner and Barry Thomas on Friday. Bruner and Thomas were charged with criminal trespass.

‘This is about as serious a transportation crisis as we can imagine,’ Mayor Kasim Reed said.

The Georgia Department of Transportation said inspectors are looking over the collapse, but there is no timeline on a fix …”

This is going to be a disaster for Atlanta.

I can’t imagine what the traffic is like there now. It was already maddening and now this happened and a huge section of I-85 has been closed in both directions in the heart of the city. Wow.

Do you want me to be brutally honest? As I wrote here last night, the ancestors of these people were brought to Georgia to work as slaves on rice and cotton plantations. The abolition of slavery was based on the assumption that a free market economy is vastly superior and that slavery was holding back our economic development. If you believe all human beings are equal interchangeable units and there are no heritable racial differences, it makes sense. But what if that isn’t true?

What if all people are not created equal? What if our ancestors were right and there really are major racial differences in intelligence and behavior? Many generations ago, Georgia’s plantation economy was violently destroyed and the ancestors of these people who were antebellum field hands were set free and were told to make their way in a modern free market economy.

Over the next 150 years, Georgia’s agricultural economy became less labor intensive to the point where only a tiny percentage of the population still works in agriculture. Manufacturing has also become less labor intensive. Fewer people work in factories. Imagine what it must be like for the bottom third of the black population which is marooned in an economy that is utterly unsuited to their abilities. Their services are no longer required for much of anything outside of sports and narcotics distribution.

The people who rule this country have no idea of what to do about this problem. They can’t even acknowledge the nature of the problem without collapsing their ideology. If it weren’t for systemic racism, this homeless bum could simply retrain and become an astrophysicist like Neil deGrasse Tyson. That’s what we are required to believe. It’s something to think about while you are stuck in Atlanta’s traffic.