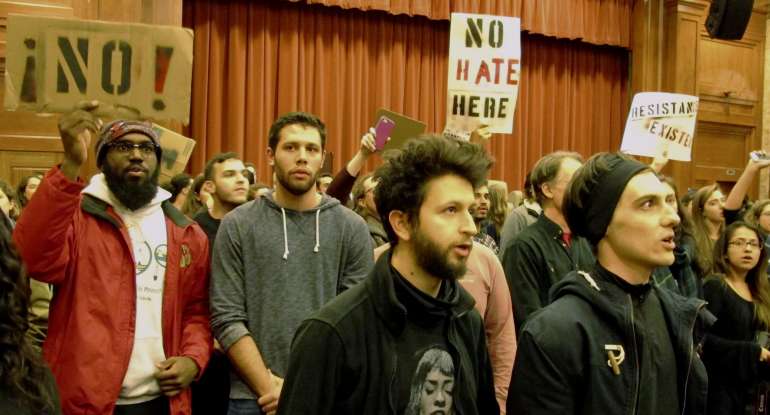 Jonathan Haidt: The Rise Of Ophobophobia

The American university is being transformed into a sacred space for the propagation of an orthodoxy of a new secular religion:

“When a mob at Vermont’s Middlebury College shut down a speech by social scientist Charles Murray a few weeks ago, most of us saw it as another instance of campus illiberalism. Jonathan Haidt saw something more—a ritual carried out by adherents of what he calls a “new religion,” an auto-da-fé against a heretic for a violation of orthodoxy.

“The great majority of college students want to learn. They’re perfectly reasonable, and they’re uncomfortable with a lot of what’s going on,” Mr. Haidt, a psychologist and professor of ethical leadership at New York University’s Stern School of Business, tells me during a recent visit to his office. “But on each campus there are some true believers who have reoriented their lives around the fight against evil.” …

Students and professors know, he adds, that “if you step out of line at all, you will be called a racist, sexist or homophobe. In fact it’s gotten so bad out there that there’s a new term—‘ophobophobia,’ which is the fear of being called x-ophobic.” …”

A history of “anti-Semitism” pic.twitter.com/AGumxTT4r6

A history of white privilege pic.twitter.com/vg6peFM8kt

A history of Islamophobia pic.twitter.com/eHcJiYBvgi

This is how much Americans cared about accusations of “racism” prior to 1940 pic.twitter.com/EHe7sWk1xy

You don’t want to be out of step with the “mainstream” now do you, goy?

There are other central themes of the narrative like the notion that we are a “nation of immigrants” and that “diversity is our strength.”

We weren’t a “Nation of Immigrants” until 1960 either pic.twitter.com/vRrtG0rhzv

“Diversity is our strength” was popularized in the 1980s pic.twitter.com/5wXCUdCcBW

Where did these ideas from? Surprisingly, they were all coined by various academics and leftwing activists. They were propagated by the mass media after the Second World War which began calling itself the “mainstream.” They didn’t come from the West’s great religions or philosophers. We threw traditional morality in the garbage and replaced it with The Narrative as revealed by television.

The emerging mainstream media created the sin of of “racism” in the late 1930s and early 1940s pic.twitter.com/ArXadEuOMD

American racial attitudes were transformed in that ten year window:

Americans came to believe in racial equality for the first time in history in 1946 pic.twitter.com/mtUdSiIJ2Q

Imagine the realization that must have occurred to these mid-20th century media elites: because of the rise of film, television, radio and nationally circulating newspapers and magazines, they suddenly had the power to disrupt and transform organic cultures from thousands of miles away. In a matter of ten years, they had completely transformed the way White Americans thought about race.

If this could be done so easily with race, what else could the same model be applied to? Couldn’t you rewrite our sense of identity in attempt to create a “New Man”? In a nutshell, that’s how we got to where we are today as the –isms and -phobias multiplied while various cultural traditions and voices were declared to be outside the “mainstream” and were suppressed.

In order to make it work, you need a loyal opposition. That’s where respectable conservatism comes in at exactly the same time that the “mainstream” was being born.

Note: The discourse about “hate” and “hate groups” and “hate crimes” is a narrative the “mainstream” uses as a lens to describe its enemies.