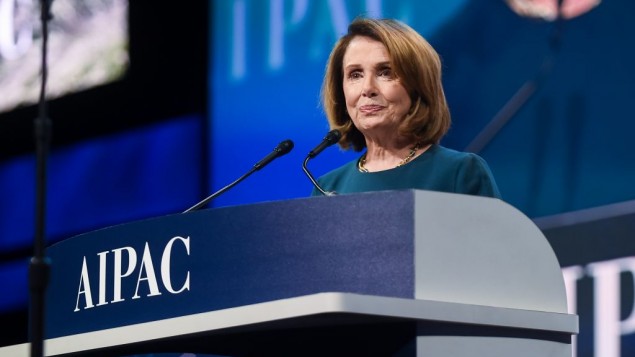 1.) Nancy Pelosi’s father was a shabbat goy who spoke Yiddish. Naturally, he ended up in Congress where he was subservient to Jews in the 1940s.

2.) Pelosi is proud to come from a family of politicians. Her brother was also mayor of Baltimore. She can’t boast of having Jewish grandparents, but is proud of her Jewish grandchildren.

3.) The United States is “an idea centuries old.” Apparently, we share that with Israel which has a great tradition of immigration except for accepting Syrian refugees!

4.) The establishment of Israel is “the greatest political achievement of the 20th century.” Can you imagine President Trump talking that way about the Russian Federation?

5.) We haven’t done enough to “rid our country of the poisonous attitudes we are witnessing now.” By that Pelosi means “the Alt-Right feels empowered” by the outcome of the 2016 election.

6.) Pelosi says “anti-Semitism” and other bigotries must be condemned in all forms. Russophobia, however, is perfectly fine. It is being stirred to new heights by Democrats.

7.) It is a shame that there is “a campaign to delegitimize Israel.” Meanwhile, Nancy Pelosi is at the forefront of the campaign to demonize Russia.

8.) Israel ought to remain “a Jewish state.” It ought to remain Jewish, democratic and secure in the 21st century. What about White Americans who want the United States to remain a White majority country? They’re all a bunch of “racists.”

9.) 189 House Democrats signed a letter to President Trump that says a “one-state solution” would destroy Israel’s “Jewish and Democratic character.” It’s not “racism” when Israel is doing it.

11.) We must oppose Iran because it is Israel’s regional enemy and because of “values.” Can you imagine President Trump ever saying we must oppose Russia’s enemies?

I will just say Pelosi’s obsequious speech on behalf of a foreign power speaks for itself. Clearly, it is Israel which has real power over our government, not Russia.