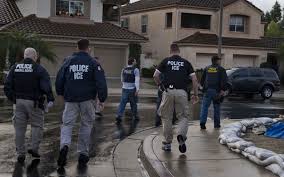 Emboldened by the election of Trump, ICE has been started rounding up illegal aliens that have committed crimes during their time in the United States.

The usual suspects are starting to kvetch about the looming purges:

“The White House and the Department of Homeland Security have turned Donald Trump’s ominous campaign promises and sweeping executive orders into a brutal reality, setting the framework for a far-reaching crackdown on illegal immigration nationwide and mass deportations. For the agencies tasked with immigration enforcement in the Trump era, it’s the morale boost they were looking for. Tens of thousands of Immigration and Customs Enforcement and Border Patrol agents scattered throughout the country are reporting feeling newly galvanized; “We’re trusted again,” as one I.C.E. veteran put it.”

But its not just nebulous improvements like “trust’ being restored. Trump’s plan has teeth!

“The new Trump policy represents a wholesale rejection of the approach taken by President Barack Obama, who directed Border Patrol and Immigration and Customs Enforcement to prioritize the deportation of undocumented immigrants convicted of serious crimes. Instead, D.H.S. will now allow immigration and law enforcement officers to target any undocumented immigrants convicted of any criminal offense—no matter how minor. That includes immigrants who “have abused any program related to receipt of public benefits,” The New York Times reports. While it is not expected to apply to “Dreamers” formerly protected under the Deferred Action for Childhood Arrivals program, the new policy opens up millions of people to the threat of deportation, no matter how long they have lived in the country or whether their children are native-born.”

“During my career at ICE I have never had the opportunity to commend a sitting U.S. president, or DHS secretary, but I’m doing so today. Amidst all the hammering from the media, and protests from special interest groups, President Trump and Secretary (John) Kelly haven’t wavered, but instead continued steadfast in their support of the rule of law and our officers in the field,” said Chris Crane president of the union representing ICE.

This video shows a taste of what is to come:

It looks like the man being arrested in the video has been convicted of sexually assaulting a minor. He received 8 years in 2000, and more recently they determined he violated probation related to his conviction. He also had an outstanding arrest warrant.

That doesn’t stop the flow of crocodile tears from the camera man. For about a minute he basically whines that “he wasn’t doin’ nuffin an shieeet.”

The Mexican (presumably) holding the camera also says, “God knows how long it will be until he sees his family again.” Well our hearts go out to Jose, hopefully he can be safely reunited with his brother on the other side of the great big wall thats going up along the southern border.

Check out the comments section for even more winning.

With ICE emboldened, financed, and reinforced, this is a good sign of things to come in the next fo- I mean eight years.