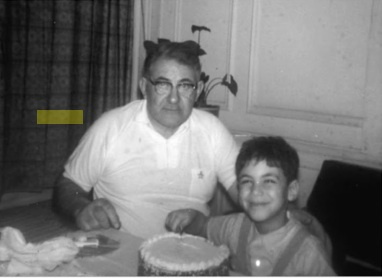 Mayor Rahm Emanuel is speaking out “against the hatred and ugliness swirling around us”:

“One-hundred years ago, my grandfather immigrated to the City of Chicago. He was just 13 years old. He had no money. He spoke no English. He knew no one, except for a third-cousin he had never met. He came to Chicago to escape anti-Semitism and the pogroms of Eastern Europe. He found a city where, if you work hard and play by the rules, you can succeed — regardless of your faith or national origin. He found work as a truck driver and meat cutter, and his children would go on to find success as a police officer and a nurse. …

My grandfather came to a city of opportunity, not a country that breaks up families at the border. He came to a land of liberty, not a place where federal agents stop people on the street to ask for their papers. He came to a country that has prospered with each new generation of entrepreneurs, innovators and dreamers of every faith and nationality who have sought the promise of a better life in America. …”

1.) If Rahm Emanuel’s grandfather arrived in America a century ago, the White House was occupied by President Woodrow Wilson who resegregated federal government. He arrived in a country where D.W. Griffith’s The Birth of a Nation was the most popular film in America.

4.) Rahm Emanuel’s grandfather would have lived through the Immigration Act of 1924 which established the National Origins System. It severely restricted immigration from Eastern Europe making it impossible for more people like Rahm’s grandfather to come here during the 1930s.

5.) Rahm’s grandfather would have lived through the Hoover administration which launched a mass deportation of illegal aliens from Mexico during the Great Depression.

7.) Rahm Emanuel is right that the S.S. St. Louis was turned away from American shores. We didn’t have a refugee program until the Carter administration.

8.) Rahm Emanuel’s grandfather lived in a Chicago that was covered by restrictive covenants that segregated housing. When Martin Luther King, Jr. attempted to integrate Chicago in 1966, he said “I’ve been in many demonstrations all across the south, but I can say that I have never seen – even in Mississippi and Alabama – mobs as hostile and as hate-filled as I’ve seen here in Chicago.”

9.) Rahm Emanuel’s grandfather came to a country where whiteness was necessary to become a naturalized American citizen. It remained that way until the McCarran-Walter Act of 1952. The vast majority of the world’s population was still excluded from immigrating here until the Immigration Act of 1965 opened our borders to Third World immigration.

10.) As for being a “land a liberty,” it is a myth that anyone who desired to do so could come here. The immigrants who came through Ellis Island were screened in ways that Rahm Emanuel would consider outrageous. Millions were turned away or returned to Europe. The total collapse of immigration enforcement on the Mexican border is also recent phenomenon.

11.) We did not accept “dreamers of every faith and nationality.” On the contrary, we excluded the vast majority of the world’s population. We even capped immigration from Eastern Europe.

12.) The term “racism” was only popularized in the 1940s during the Second World War. Rahm Emanuel’s grandfather lived in the America of Al Jolson and Amo ‘n’ Andy. The majority of White Americans believed in the racial inferiority of blacks until the early 1940s.

13.) Rahm Emanuel’s grandfather lived through an America in the 1920s where the Second Klan and Marcus Garvey’s UNITA were flourishing.

14.) “The true definition of America” in the lifetime of Rahm Emanuel’s grandfather was one that excluded more people like Rahm Emanuel and Sadiq Khan from immigrating here.

15.) Needless to say, “anti-discrimination” only became an American value after the triumph of the Civil Rights Movement. American immigration policy was discriminatory from 1790 until 1965. It is still discriminatory in the sense that desirable immigrants are penalized while undesirable ones are encouraged to settle here thanks to the family reunification provisions that have swollen our underclass.

Final thought: it is impossible to study the history of 20th century America without noticing the enormous cultural impact of Rahm Emanuel’s people. As they rose into the American elite, they changed America in all kinds of ways. We don’t have the same values that our ancestors did a century ago.