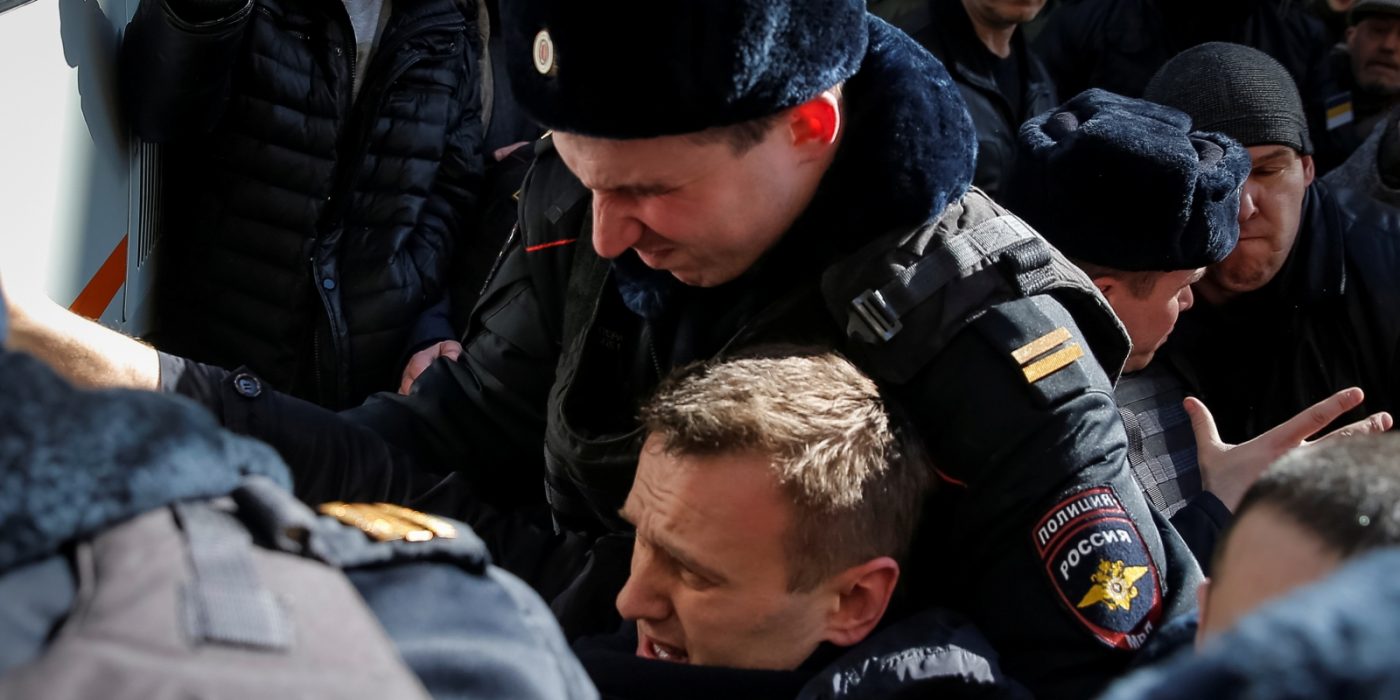 If you aren’t a close follower of Russian politics, you may want to strap in for this one, because its a doozy. This story is about Russia’s premier neoliberal ‘non-system’ activist and ‘anti-corruption’ campaigner, Alexey Navalny.

Navalny is an interesting character. For some reason or another, Navalny seems to symbolize the Byzantine contradictions of Russian politics better than any politician. He was arrested en route to an illegal protest that he scheduled in the center of Moscow over the weekend.

The Duran offers their take on the situation:

This is part of the regular circus between the Russian authorities and Navalny.  He pretends to be persecuted, and they pretend to punish him.  In reality, though he now has two convictions for serious embezzlement as well as multiple public order offences – some minor, some less so – he remains free and continues exactly as before, with the authorities doing nothing to enforce the various sentences the Russian courts have imposed on him.

Navalny’s essential immunity from legal action partly reflects the authorities’ unwillingness to make a martyr of him.  However it also reflects their hardheaded calculation that Navalny puts off far more people than he attracts, and that he creates for Russia’s ‘non-system’ ‘liberal’ opposition more problems than benefits.  This is in part because notwithstanding Navalny’s undoubted rhetorical and public relations skills, his political views are not only not those of most Russian liberals, but are actually their diametric opposite.”

Now, the protests were officially planned against the corruption of former president and current prime minister Dimitry Medvedev. Navalny accused Medvedev of using funds from a charitable foundation to restore an abandoned manor in the countryside and living like a modern-day boyar. The accusations are probably correct. Take a look at what Navalny had to say:

Now keep in mind, Medvedev was the LIBERAL candidate. He was their champion in 2008-2012,  the young cool guy who liked to listen to rock on his iPod. During his time in office, many liberal reforms were passed in the country in quick succession, and Russia completely dropped the ball with Libya. Putin’s return in 2012 is often seen as unplanned and as a knee-jerk reaction to four years of Medvedev.

Fast-forward to today and you have Putin’s faction and Medvedev’s faction getting ready for a showdown within the Kremlin.

The Saker has written excellent material on the internal power struggles within the Kremlin. Here is his take on the expected government purges:

“While the word was focused in rapt attention on the outcome of the US Presidential election, Vladimir Putin did something quite amazing – he arrested Alexei Uliukaev, Minister of the Economy of the Medvedev government, on charges of extortion and corruption. Uliukaev, whose telephone had been tapped by the Russian Security Services since this summer, was arrested in the middle of the night in possession of 2 million US dollars. Putin officially fired him the next morning…

…The way Uliukaev was detained was carefully choreographed to instill the strongest sense of fear possible in all the other 5 th columnists still in power because in so many ways Uliukaev was a symbol for all the the “Atlantic Integrationists” (those in the Kremlin who want to integrate Russia into the US controlled international security system): Uliukaev was a known liberal, just like Nikita Belykh, governor of Kirov Region, who was detained in a high-publicity arrest in June for taking a 400’000 Euros bribe. I would even say that Uliukaev could be considered the ultimate symbol of the Atlantic Integrationists and a faithful member of the Russian “liberal” (meaning the “Washington consensus” type) sect who, in the past had worked with Egor Gaidar and Alexei Kudrin and who now has been brought down by the Russian “siloviki”, the top officials of the so-called “power ministries” (defense, state security, intelligence)…

…In April, I predicted that a government purge was in the making. I have to admit that I thought that this would have happened earlier. Apparently Putin decided to take action while Uncle Sam was busy with his own, internal, problems. If that is indeed the reason for the late timing, that says a lot about the power of the USA still wields in Russia. Some observers noticed that the arrest of Uliukaev took place after the telephone conversation between Trump and Putin, hinting that Trump might have given Putin the go ahead for the arrest. That is, of course, utter nonsense, but if that can make Putin look bad – it’s good enough for the 5th columnists…”

The Saker archives are an absolute must for anyone trying to make sense of the power struggles within the Kremlin.

So Navalny decides to do an “anti-corruption” and “anti-Medvedev” protest despite the fact that Navalny is himself a liberal and Medvedev is considered a liberal as well. Oh, and Navalny has been charged with corruption on two separate accounts all while claiming to be an “anti-corruption” candidate and campaigner. And despite all the disturbances that Navalny causes, he is allowed to pull his stunts with only minimal fines and never seems to stay in jail for long. Some speculate that the Kremlin lets him run wild to discredit and fracture the Liberal movement.

The Atlantic can’t seem to figure out what Navalny stands for either:

“Engelina Tareyeva, who worked with Navalny when he was a member of the liberal Yabloko party before he was expelled in 2007, has accused him of routinely using racial slurs and basing his relations with people on their ethnicity. “I consider Aleksei Navalny the most dangerous man in Russia,” Tareyeva has written. “You don’t have to be a genius to understand that the most horrific thing that could happen in our country would be the nationalists coming to power…’

Paul Goble, a U.S.-based expert on ethnic relations in Russia, says the country’s liberal opposition has failed to win broad support over the years in part because it has not addressed issues that are important to the ethnic Russian majority. He believes Navalny’s open approach to such issues could be politically successful, but cautions he shouldn’t dismiss the danger of extremism too cavalierly.

“If someone who is as high-profile as Aleksei Navalny has become uses ugly words to describe ethnic minorities and appears to appeal directly to some of the most fundamentalist values of ethnic Russians, then there is a real danger that extremist elements — which I’m quite sure Navalny himself would condemn — will see that as a sanction for their behavior,” Goble says.

Navalny has also at times seemed insensitive to the historical echoes that words like “deportation” have to some national groups within Russia.”

It actually isn’t that hard to understand Navalny if you can remove yourself from the Western context. Navalny is surprisingly representative of Russia’s middle class, contradictions and all. They have nothing but scorn for the government regardless of who’s in it and hate Russia as an abstract concept. They live in the big cities and hate the “provincials”, hate immigrants but love Europe and Western values, are pro-LGBT and anti-Islam, have 1.5 kids and expensive little dogs that they dress up in human clothes. They are pro-environment and drive massive range rovers at high-speeds along crammed city roads, and of course periodically howl about corruption after they have stolen enough to be comfortable.

They rarely go out to these kind of protests, but their spoiled brat kids do.

Anatoly Karlin has noticed this phenomenon at the protest as well:

“As expected, turnout wasn’t particularly high…Taking the average estimate from supporters and detractors was a good strategy for estimating crowd size in 2011-12, and coincidentally enough, the resulting figure of 7,500 coincided exactly with the police estimate of 7,000-8,000 protesters. This is not altogether bad, thought quite insubstantial in a city of 12 million.

To be sure, this was an unsanctioned protest, and as I pointed out earlier, a lot of the risk-averse office plankton who form the bulk of Navalny’s support don’t turn up to such protests. They don’t want to run the risk of getting arrested, not when it could impact on their employment. Still, this is about 3x fewer participants than in the last big protest of the 2012 wave, which was also unsanctioned, the farcical “March of the Millions” of May 6 to which about 25,000 turned up.

With the lack of office workers in the crowd, the demographics were heavily tilted towards young people and university students, though there were quite a few older people with that Soviet intelligentsia look.”

Navalny is part of a particularly dangerous brand of nationalism mixed with liberalism that has been brewing in Russia for many years now. The nationalists and liberals find themselves in agreement on many points. First and foremost is the question about non-Russian republics within Russia. Liberals want them to split off from Russia because of Wilsonian ideas of self-determination (and Western funding).

And the Nationalists want to do the same because they want Russia to be an ethnostate and not a multinational federation. Navalny represents the merger of these two dangerous strands of thought. Both are considered treasonous by the Russian state, which has expended an unfathomable amount of blood and treasure to maintain the territorial integrity of Russia.

The arrests were swift and efficient. The message that the Kremlin sent was clear: You are not going to pull off yet another color revolution in Russia.

TopicsNavalnyrussiaVladimir Putin
Share on FacebookShare on TwitterShare on RedditShare on VKontakte