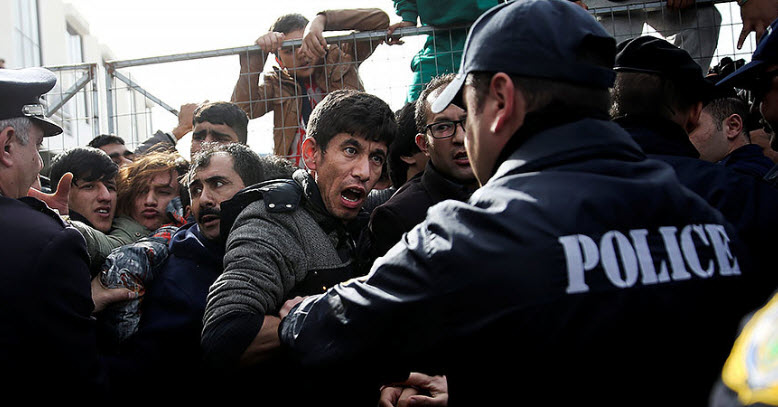 Contrary to what Germany and other European states say in public about tolerance and the economic benefits of accepting millions of refugees, in reality they are starting to squirm. It seems that not all of those young men flooding into Europe are budding engineers and doctors to be. Most are a massive money sink and have arrived solely for the purpose of receiving gibs.

There is a story here about the internal politics of refugee flows that we are not privy to. It seems that behind the scenes, despite all the talk of tolerance and acceptance, there are technocrats crunching the numbers and starting to sweat.

“We accommodate 60,000 refugees… and it would be a mistake to make Greece’s burden heavier by the revival of the Dublin agreement,” he said, also adding that Germany, the primary destination for most refugees, “wants countries where refugees arrive first to bear a large portion of the burden.”

Asked if Athens is ruling out implementation of the Dublin Regulation, Mouzalas answered in the affirmative, adding, “I want the Germans to understand that this is not because of political or ideological reasons, or failure to appreciate Germany’s assistance.”

“Greece simply has no capacities to cope with additional arrival of refugees,” he said. “We’ve just pulled ourselves together, so please, don’t make us falter again.”

At this stage, Mouzalas said, Greece is ready to accommodate only a small number of refugees as a symbolic gesture, showing “that we’re not opposed to the Dublin agreement.” Greece “reached its limits” and “we can’t bring in a single refugee,” he reaffirmed, appealing “to the common sense of Europe.”

The Dublin Regulation that he is referring to stipulates that refugees can be returned to the first EU state they arrived in. This is also in keeping with a similar principle in international law which states that neighboring states to a conflict zone have an obligation to take care of refugees fleeing the conflict. This would mean that Turkey would have an obligation to take care of Syrian refugees. Turkey does in fact have massive camps of refugees that Erdogan has threatened Germany in the past with. Germany basically has to pay a bribe to Turkey to keep the gates closed and in exchange has also made overtures towards allowing Turkey to join the EU.

This would be catastrophic.

And what is happening in Greece may spark off yet another EU crisis. The last one occurred over Greek debts to Germany. Germany won. Now it seems that Greece and Germany are headed towards another showdown. Only this time it isn’t about debts, its about refugees.

During the Greek crisis, Lefties came to power and defeated groups like Golden Dawn. However, the terms of the fight have changed. If Germany decides to start pushing off its excess refugees on other European states, expect to see more EU-exits from with the union and gains by right-wing groups. On another note, perhaps Germany has been playing the long game here and has finally figured out how to weaponize refugee flows to make other countries pay debts . . . I admit, I’m really reaching here.