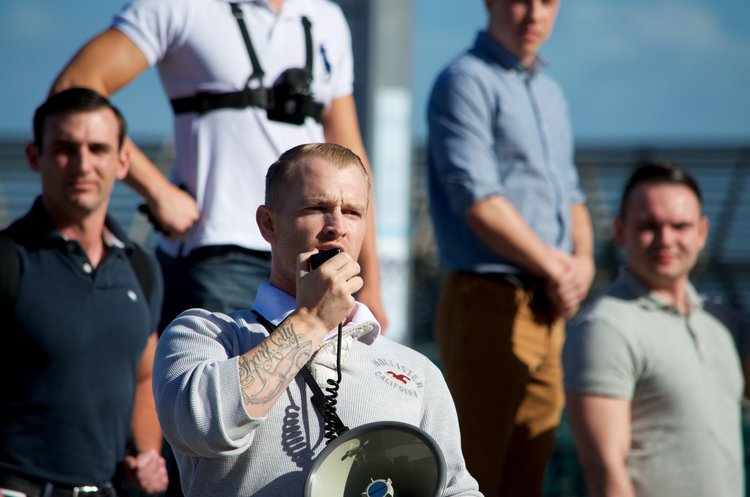 7 Reasons Why Alt-Right Men Are The Hottest

Listen to the worst people on earth (leftists, cucks, Louise Mensch…) and you would think the Alt-Right is a cult led by Richard Spencer and worshipped by unemployed neckbeards. And while we’ve got some of those, the Alt-Right is largely composed of smart, virile chads who risk careers and relationships to save the white race. Here’s why Alt-Right men are the hottest.

The Alt-Right male believes he has a duty to perfect his physique and appearance in accordance with the inherent potential afforded him by European genetics. As such, he is more likely to lift heavy weights, run fast, eat well, wear properly fitting clothes, and fashily cut his hair in a nod to Germany’s golden age. There are no pajama boys in the Alt-Right, and the masculinity they exude is positively intoxicating.

Meanwhile….. on the beach…. pic.twitter.com/Pg5iq3LWOi

The perpetuation of the white race is of paramount importance to Alt-Right men, which means they all want to see MOAR WHITE BABIES. Yet unlike the r-selection men who treat their women like bitches in a puppy mill, they invest in each of those children to steel them for the struggles to come. To be an Alt-Right man is to be a family man: devoted to his clan, against cheating and divorce, likely religious, and an advocate for personal and household protection. Such qualities sing to women, who seek strength and stability.

Having an AltRight man IRL pic.twitter.com/hX4w9a8Anf

Veterans of the Great Meme War will tell you that uncucking our people, online and IRL, is a long, hard slog. Most men are not cut out for daily ideological warfare, trolling shitlib journalists, enduring constant online censorship, and dropping red-pills for friends and family. But thankfully our Alt-Right men are a committed bunch. Further, they are training in small arms and personal protection (if they’re not already military veterans) because they know that our Cold Civil War is warming up, and they intend to be the victors. This is hot.

The Alt-Right is accused by the Lügenpresse of being either skinheads, white supremacist Nazi thugs who decorate their homes with swastikas, or basement-dwelling NEETs addicted to anime (not that there’s anything wrong with either).

But in reality, most arrived to the Alt-Right through intense research and a personal quest for truth, meaning, and real identity. They know their favorite philosophers, can identify Hitler’s missteps in World War II, and often shock newcomers to the movement by how literate and well-educated — in the real sense of the term — they are. It’s complete libel that the Alt-Right is full of simpletons obsessed with race, when truthfully, it’s intelligence that links many Alt-Right men . . . and intellect is yugely appealing.

Feminists bleat that women are equal to men and that they should enjoy the same slavery of wagecucking and tax bondage as men in order to liberate them from motherhood as they fund their own dispossession by the Third World. What a deal!

Alt-Right men celebrate women for the most vital biological gift of all: the ability to birth and raise white children. Throughout history, this has been been assumed; only in (((recent decades))) have white people fallen prey to the siren song of materialism and delaying having children. It doesn’t mean that women are simply breeders — men and women have different, but complementary, roles — and the Alt-Right man recognizes that. He appreciates his woman for what she is capable of and what she exclusively can do for him, and that’s immensely attractive in a mate.

To be an Alt-Right man is to be principled in ways that no other movement can offer. They’ve quit the sorcery of the Jew Tube, ditched the noggery of professional sports, decried the foul beast that is pornography, and would ideally homeschool their many children so they don’t fall prey to the false teachings of diversity. And every time a major company cucks, the Alt-Right boycotts their products or service (we’re looking at you, Kellogg’s, Netflix, Jockey, Nike, et al.). Alt-Right men endeavor to be true role models, and put their money where their mouths are — and that’s sexy as hell.

Stop being a pleb. Go to the symphony.

White Nationalism is a concept so dangerous to the status quo that it can get a man fired, alienated from his family, and rejected by his friends. Yet the Alt-Right man perseveres, knowing that western civilization is at a crossroads; without his commitment, the world will fall to nefarious influence, removed from grace. He fights for recognition of his identity, to secure the existence of his people and a future for white children. Rebels have always held irresistible allure, and Alt-Right men are no exception.

10/ Would you like to tell us why you searched for "Inspirational Hitler speeches" or "Ride the Tiger PDF"? You better have a good lawyer. pic.twitter.com/KJuLQA2eSV

In truth, any woman would be extremely lucky to find herself cared for and appreciated by an Alt-Right man. Sure, he may spend inordinate time shitposting til the wee hours of the night, but it’s all for a good cause — saving the white race. Alt-Right men have a purpose and drive greater than themselves, and that’s both undeniably white, and irrefutably alpha.

TopicsListsRomance
Share on FacebookShare on TwitterShare on RedditShare on VKontakte

the authorWolfie James
Wolfie's writing has been referred to by shitlib journalists as "vulgar and distressing," a description which is not entirely untrue. Follow her on Twitter for insights into the thought process of a woman on the Alt-Right.
All posts byWolfie James