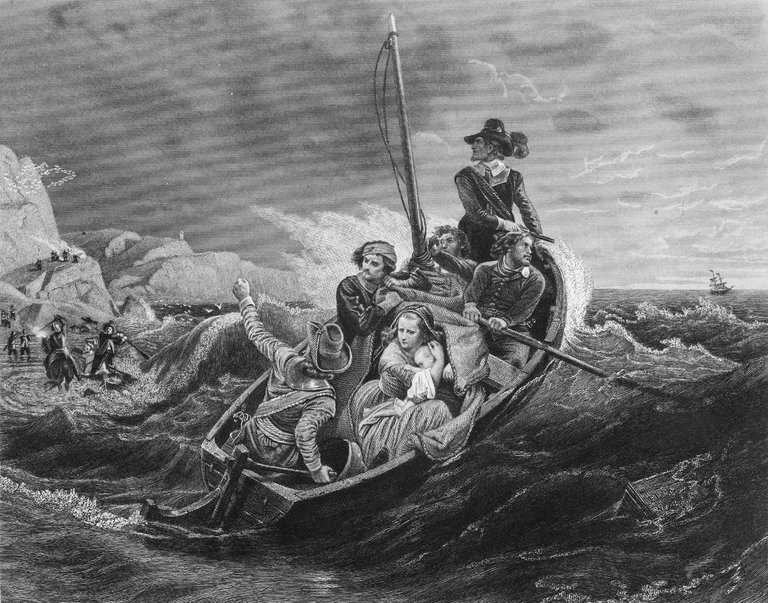 David Brooks has a new opinion column in The New York Times on the collapse of American identity:

“One of the things we’ve lost in this country is our story. It is the narrative that unites us around a common multigenerational project, that gives an overarching sense of meaning and purpose to our history.

For most of the past 400 years, Americans did have an overarching story. It was the Exodus story. The Puritans came to this continent and felt they were escaping the bondage of their Egypt and building a new Jerusalem. …

We have a lot of crises in this country, but maybe the foundational one is the Telos Crisis, a crisis of purpose. Many people don’t know what this country is here for, and what we are here for. If you don’t know what your goal is, then every setback sends you into cynicism and selfishness.

It should be possible to revive the Exodus template, to see Americans as a single people trekking through a landscape of broken institutions. What’s needed is an act of imagination, somebody who can tell us what our goal is, and offer an ideal vision of what the country and the world should be.”

I can’t help but laugh reading this.

Around the mid-20th century, the Eastern Anglo-American elite was overthrown in the United States and was replaced by a new cosmopolitan elite dominated by David Brooks’ people. After their arrival in power in our elite universities which was a product of the switch to the meritocratic system, they have spent the last 65 years or so destroying any sense of a common American identity. Now that they have destroyed it, they’re like what are we going to do now?

“Today’s students get steeped in American tales of genocide, slavery, oppression and segregation. American history is taught less as a progressively realized grand narrative and more as a series of power conflicts between oppressor and oppressed. …”

David Brooks throws an idea against the wall after reading Philip Gorski’s new book American Covenant: maybe we can all unite around a Puritan inspired Exodus story?

Even back then, Puritan New England was its own place with its own peculiar regional culture. Professor Clyde Wilson describes these people in his new book The Yankee Problem: An American Dilemma. Whereas New England was settled by a religious sect with a troubled history that came to America to build a “a shining City upon a Hill,” the South was founded by mainstream settlers from the British Isles who saw their region as a promising “garden” to be cultivated:

“One can understand a great deal of American history by remembering a simple fact about the founding. New England Puritans came to America to get away from a world of sinners and to construct “a shining City upon a Hill” which would be an example for all mankind of a superior commonwealth. The Yankee elite kept all of their over-developed and self-centered righteousness after they lost their Christianity and replaced it with the imported German philosophy of Transcendentalism. By contrast, people who came to settle the South saw America as a promising garden to be cultivated, a place where land could be had and personal honour and independence be established by younger sons and common folk in ways that were no longer possible in the Mother Country. …”

The Southern colonists didn’t see their subtropical region with its benign climate and rich soils as “a waste and howling wilderness” like the New England Puritans:

“The garden has endured as an evocative metaphor for the American South. With its European discovery, the region became the latest locus in Western culture’s quest for ‘the garden of the world.’ Puritans may have regarded the New England landscape as ‘a waste and howling wilderness,’ as Michael Wigglesworth alluded to it in 1662, but settlers of the Southern colonies most often described their natural surroundings in benign, even pastoral terms. The contrasting perceptions of the American landscape are, in part, explained geographically. The long harsh winters and stony soils of New England did not encourage benevolent attitudes toward nature; whereas the Inilder winter climate, richer soils and longer growing season of the South have always allowed gardens, and the garden metaphor, to flourish. …”

The Garden Myth of a Southern Arcadia is explored by Lewis P. Simpson in The New Encyclopedia of Southern Culture: Volume 4: Myth, Manners, and Memory. He wrote a book about it in the 1980s called The Dispossessed Garden: Pastoral and History in Southern Literature.

Anyway, I just went outside to check the mail and I noticed that our flowers are blooming. Spring has arrived in the South. We barely had anything that could be described as a winter this year. I live in a warm and sunny land where we get excited when less than an inch of snow falls on the ground. The scene outside in my front yard is more Swallow Barn than Walden.

David Brooks is right that we lack a national Telos. In the 20th century, the common experience of the Great Depression and World War I and World War II had a great homogenizing effect on American culture. The same is true of the creation of the consolidated, vertically delivered mass media which for a time papered over enduring regional and cultural divisions. The Immigration Act of 1924 ended mass immigration from Europe which never returned. The Cold War allowed Americans to maintain a weak sense of national identity based on ideological opposition to the Soviet Union.

By the 1960s, the American elite was able to take the unity of the country for granted. America was 85 percent White. We shared the English language. We had a strong Christian culture. We had an economy that was the envy of the world. We had a common popular culture. The media was trusted. Virtually all national institutions still had a strong sense of legitimacy which has evaporated in our own times. The federal government could embark on projects like declaring a War on Poverty whereas today the simple act of passing a national budget has become a legislative ordeal.

Personally, I believe the damage inflicted on the country by our cosmopolitan elite is so severe that it will prove to be terminal. We are in the earliest stages of a national collapse. Consider the fact that the American elite is ideologically committed to multiplying and exacerbating our existing divisions because “diversity is our strength” and “we are a nation of immigrants” according to the dominant narrative. Even if they wanted to do so, they are incapable of reversing course without betraying their sense of identity. We’re going over the falls and nothing can stop our dramatic unraveling.