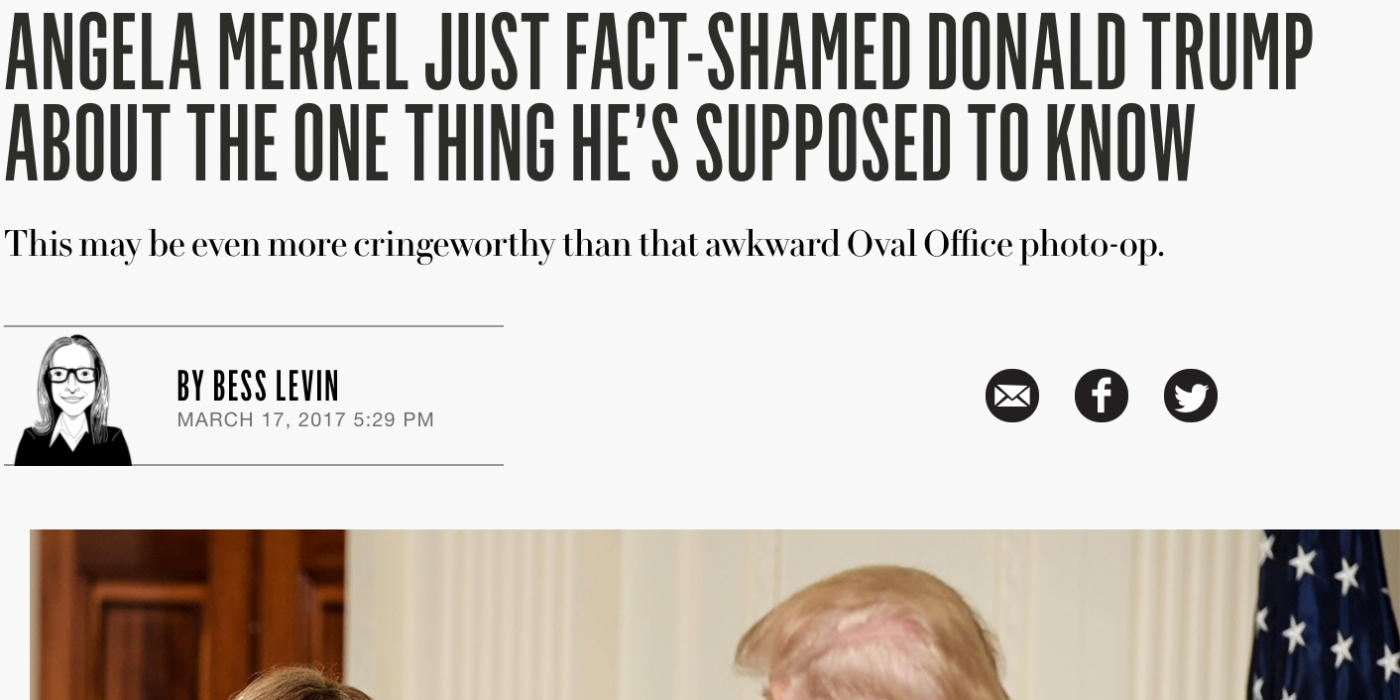 The meeting had several highlights.

One of which was when Donald Trump joked about the wiretapping that happened under Obama.

Take a look at her expression! Ah the Stumpening is the gift that keeps on giving.

Then there was the photoshoot. Donald Trump is pointedly asked if he wants to shake hands with Merkel first by the press, then by Merkel herself.

And that is good news indeed. Angela Merkel may go down in history as one of the worst leaders of all time. A treacherous spinster whose only claim to fame was callous virtue-signaling for the benefit of the comfortable cosmopolitan elite at the expense of blood and soil normal Germans.

Donald Trump not yielding an inch to her was a promising sign. It is obvious that deep down in his gut, Trump can’t stand this pantsuit-wearing careerist shrew any more than he could stand Hillary Clinton. Trump brutally took down one aging hag with a passing brutalist resemblence to a woman in his run for office, now he’s taking a stand against another.

Think about, he couldn’t even bring himself to shake hands with her in an official capacity for a meeting between two ally nations. This bodes well for patriots in the West. As we suspected, Donald Trump is in his heart of hearts, not as far gone as the rest of the treacherous Elite. He may be bruised from his first tussle with the Deep State, but on the international stage, he’s still our Golden Don.

Trump also said that immigration was a privilege, not a right, and refused to apologize for any of his late night id-crushing tweets. All in all it was a solid performance, until it got to the discussion of trade between Germany and the United States. Trump supposedly made a gaf and the Lying Press immediately went to work and tried its patented strategy of trying to portray Trump as a bigly buffoon.

From Vanity Fair, Trump stated that:

“Germany has done very well in its trade deals with the U.S., and I give them credit for it,” Trump told a White House press conference. “Virtually any country we do business with—it’s not exactly good for our workers.”

“The U.S. has been treated unfairly and that’s going to stop,” he told reporters.

Trump ran on a platform of renogotiating unfair trade deals and economic nationalism. It only makes sense that he would bring up trade between Germany and the US in his statement. But here is what Vanity Fair latched on to:

In fact, the U.S. has no direct, bilateral trade deals with Germany. As Merkel quickly pointed out, Germany’s trade with the U.S. is governed by rules negotiated by the European Union on behalf of member states.

Wow. Owned…Except not really. Trump may have been his typical less than erudite self, but nitpicking like Grammar Commies at his statements and not correctly interpreting what the man clearly intended to say has become the new staple of the Left. Trump has talked about wanting to pursue bilateral trade deals and avoiding dealing with trade blocs on unfair terms. It was one of the motivations behind the Trump Team scrapping TPP. This also makes perfect sense, given what Trump has said about Brexit and about the need for “fair” not necessarily “free” trade.

The Left is trotting out its old one-trick pony. Just like during the Dubya era, they are trying to portray Donald Trump as a buffoon and a dolt who makes gafs on the international arena that make us look bad to more civilized and refined countries. The only problem with this narrative is that Donald Trump is anything but a clown or a puppet as George W. Bush was. The criticisms that are leveled his way don’t even pass the chuckle test.

Back in 2003, we could all have a laugh at moments like this.

But nit-picking at Donald’s supposed mishaps simply won’t work anymore. Trump is too damn smart and obviously knows what he’s talking about. And of course, the Left seems to still be in denial.

But they should know by now that they are dealing with a different animal. The only one who comes off like a fool is the Lying Liberal Press, I mean seriously, “fact-shaming” in 2017? That’s just not ok.