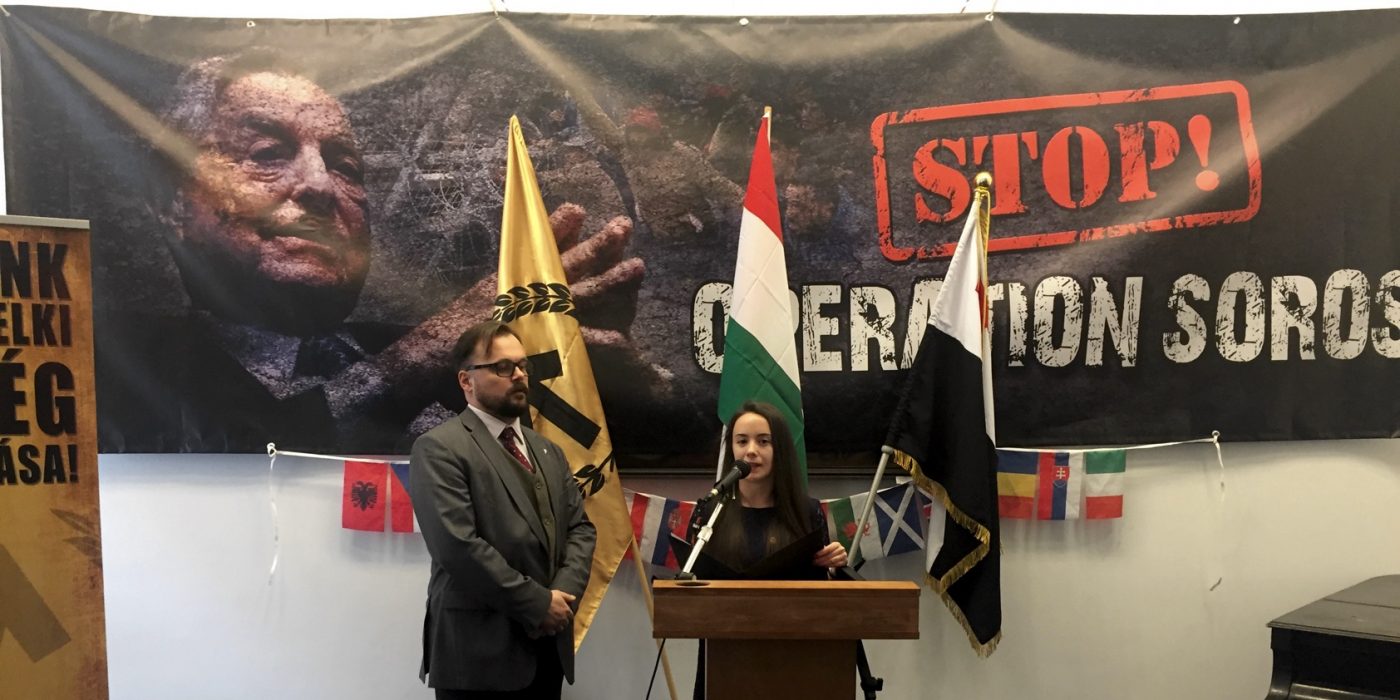 On Saturday, March 19th, The Identitarian Student Union (Identitárius Egyetemisták Szövetsége, Identitesz) organized a conference together with Knights Templar International, about the subversive globalist George Soros. AltRight.com was obviously there.

I was personally invited to deliver a speech at this conference a while back, given that I have written and commented extensively on Soros’ subversive activities in the past, as well as previously given a lecture for the Identitarian Student Union. Regretfully I was forced to decline the offer due to lack of time. I did however make sure to attend and to write a report about it for AltRight.com.

When my friends and I arrived the first thing that struck us was how disciplined and well-organized the conference was. Everyone was impeccably dressed and, at the entrance, two Identitesz members were posted on each side of the door, holding up their organization’s flag with military-like discipline. Another thing that struck me was the beautiful historical building housing the event.

After entering the conference hall, I made three main observations. The first being the tight security provided by the Hungarian Self-Defense League (Magyar Önvédelmi Mozgalom) which came in the form of a bunch of well-built, uniformed men that you would not want to mess with. The second being the popularity of the conference, as the place was packed with at least 100-150 attendants. Thirdly, I also noticed the significant media presence, consisting of almost every leftist-liberal media outlet in Hungary, as well representatives from the German TV channel Deutsche Welle, the British ”anti-racist” fake news blog ”Hope not Hate”, as well as an independent German production company apparently working on a documentary about the alternative right.

The conference lasted four to five hours and was divided in three blocks of speakers, with breaks between each to allow for socializing and refreshments.

The roster of speakers was impressive, and although, for obvious reasons, the majority were Hungarians, there was also an international presence, with speakers from the UK, Italy and Macedonia.

First to take the podium was former BNP chairman and former MEP Nick Griffin, from The Alliance for Peace & Freedom, who delivered an excellent introductory speech and an overview of George Soros and his activities.

After that, the charismatic Identitesz chairman and founder, Balázs László, took the stage to deliver a passionate speech about the need to defend our civilization from hostile globalists such as Soros.

The third and final speaker of the first block was Béla Incze, the Budapest leader of The Sixty-Four Counties Youth Movement (HVIM, Hatvannégy Vármegye Ifjúsági Mozgalom) which is an identitarian organization advocating the unification of all ethnic Hungarians who live outside of Hungary, and the revision of the Treaty of Trianon from 1920 which led to the redefining of the borders of the Hungarian state to their current form.

Ljupcho Zlatev from the Macedonian chapter of Stop Operation Soros talked about the pre-revolutionary stage Soros had created in Macedonia through his NGOs in order to undermine the Macedonian government and national identity. One striking example given was Soros’ success in persuading the previous government to even replace the Macedonian flag in exchange for financial contributions.

Szabolcs Nyiri from Identitesz was next up, and he talked about the future results of the goals of the world elites. Primarily, he detailed our current postmodern situation where multiculturalism, feminism, equality, gender studies etc. pose a problem and form part of the great displacement affecting Europe.

Imre Téglásy from the Hungarian pro-life organization Alfa Szövetség talked about Planned Parenthood and Soros’ funding of various ”pro-choice” initiatives in the US as well as in Europe. He made some solid points in his well-argued speech, and to illustrate them, he displayed tools used during late-term abortions, calling them ”the weapons of modern warfare against our civilization”, and pointed out Soros’ involvement in supporting late-term abortions. Imre is an obviously skilled orator and his speech was one of my favorites.

Angelo Baletta from Italian nationalist party Forza Nuova delivered an excellent, and one of the most popular speeches judging from reactions afterwards, about Soros’ destructive activities in his country, consisting of mainly three things: 1) funding the gay lobby, 2) funding ”refugees welcome” organizations and working to get Italy to take in the massive amount of migrants crossing the Mediterranean from North Africa, and 3) promoting abortion through funding various pro-choice organizations across Italy.

Barnabás Ábrahám from Identitesz delivered the final speech, which focused on the cultural aspects of Soros’ subversion, for example the resulting gender-confusion caused by the promotion of feminism and other subversive ideologies to the younger generations.

After this, the conference concluded, with the female presenter taking the stage to thank everyone for attending. Thereafter, everyone relocated to a nearby nationalist restaurant rented out for the occasion, where food and wine was served for the rest of the evening.

On a side-note, since I was not scheduled as a speaker I was hoping to maintain a low profile at the event and just relax. Obviously that was wishful thinking on my part, since I was approached by no less than four different journalists asking for interviews with me in the coming days. In the end, I was happy they made the requests, and I agreed to all of them since I can’t care less about what fake news media writes about me anyway, and I’m happy to put myself out there and use these opportunities to promote our various projects, especially AltRight.com and Arktos.

I therefore got one of the interviews out of the way immediately after the conference. In this case, I was faced with a thoroughly unintelligent reporter from the leftist ”very fake news” blog ”Hope not Hate” (hit piece incoming, I’m sure), which caused me to arrive a bit late to the dinner, together with my friends. The organizers were polite enough to wait for us before starting to serve the dinner, and the rest of the evening was filled with good food, drinks, and most importantly of all, interesting conversations and the opportunity to make new acquaintances.

To conclude, this was a well-organized conference on a timely and crucial topic, and I was impressed with the quality of the people attending, in particular the young student activists from Identitesz, an organization for which I see a bright future, and I was also pleased to see the collaboration taking place between them and my good friends in Knights Templar International. I am already looking forward to attending their next bigger event.

Globalism is a disease, and conferences like these are part of a much-needed remedy.