SPLC, ADL, and NAACP Have Been Buying Traffic From Google

HW: Here’s the second part in this series from Logan Crow.

Search engines literally sell traffic to websites in a process known as “pay-per-click.” Websites sponsor keywords or phrases and a link to their site is shown when people use those keywords. The cost per click generally starts at five cents. If more than one person wants the same keyword, you bid for it.

Alexa says that in the past six months:

Alexa also ranks all websites. The Alexa scores represent the estimated position of a website compared to all over websites. A global score of 10k, means that Alexa estimates that a website is the 10,000th most popular in the world.

Alexa rankings provide circumstantial evidence that the ADL is heavily buying traffic and the SPLC could easily be buying over half of their traffic. However, there is no way for a third-party to conclusively know what percentage of their web traffic is paid for.

NAACP.org currently has a US score of 29k and a global score of 141k. This is shockingly poor considering how much free press the group gets and how many online media articles link to them. There score is low enough that they probably aren’t buying a significant amount of their traffic.

We were not able to get any NAACP.org paid placement links to show up on Google. Their ad campaign might not even be turned on right now. They may only use it occasionally, or they may have discontinued using it sometime in the past six months.

ADL.org currently has an US score of 10k and global score of 49k. They are still getting beat by at least a thousand or so US-based one man blogs, but this is respectable score. Many US newspapers have similar scores. However, this is a huge improvement over the ADL’s historical scores. The ADL spent years with a global score of around 100k. Suddenly in September/October of 2016, their score rockets. Buying traffic from Google may be the reason.

During testing, it looked like only a small fraction of the ADL’s sponsored keyword and phrases are presently active.

SPLCenter.org shows the most evidence of buying traffic. For years, SPLCenter.org had global scores of around 100k. Then, in November of 2016, their score exploded for no reason. Their global Alexa score rocketed from 75k to 8.3k in a two-week period. This is an extreme change. Currently their global score is 16k, and they have an US score of 2.6k. This is an extremely high US score. To put this into perspective, the SPLC website historically had US Alexa scores fluctuating between 20k and 40k.

On December 21st, the SPLC announced that their website would not be updated for the holidays. They did not start updating again until January 2nd. An eleven day lull would normally have killed any website. Their Alexa score should have dropped like a rock off of a cliff. Instead, Alexa shows their global score only dropping from 10.5k to 11.4k. This is extremely suspicious. This is strong circumstantial evidence that a huge percentage of traffic to the SPLC website, during this period, was paid for.

A large portion of the SPLC’s sponsored keyword and phrases I tested are presently active.

In 2017, paying for internet traffic is like paying for sex. SPLC, ADL, and the NAACP are like the beta males of the internet. They get colossal daily free publicity. The media treats them like saints. Yet, few people actually want to see their websites.

Normally retailers use pay-per-click advertising to sell a product. In this case, the SPLC and ADL are selling the illusion that they have real world support.

Both the ADL and the SPLC are sponsoring their own names. This was tested with multiple browsers on multiple computers. When you type either group’s name and the paid placement link comes up, the unpaid organic link always comes up underneath it.

The SPLC is using pay-per-click to try to snipe Google users searching for the New Black Panther Party and the Family Research Council. But no one is trying to snipe the SPLC or ADL. No one else is sponsoring their names on Google!

ADL and SPLC are both paying for traffic that they would have otherwise gotten for free. You just can’t make this up. It’s hard to believe that they are this incompetent. 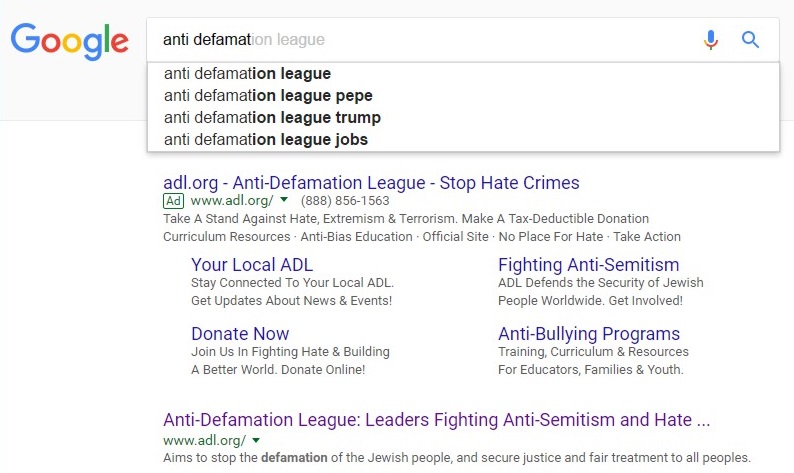