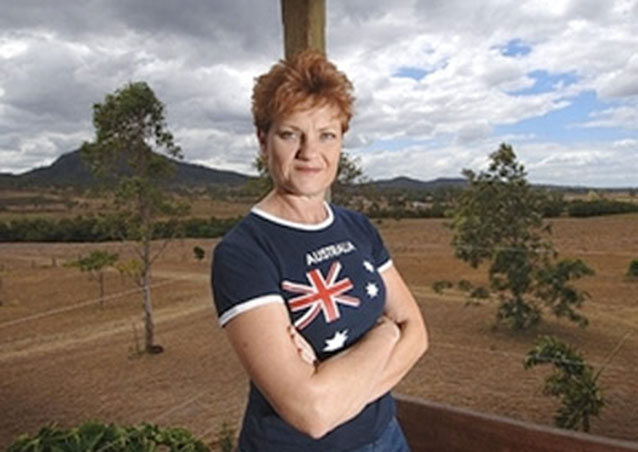 The “Alt-Right” Thrashed in Australia

Apparently, yet another right-wing populist has failed to deliver.

From a gloating Washpo:

Here, though, is some news from Down Under. The Australian version of the international brand – Pauline Hanson – has just suffered a bad stumble.

This is the first mention I have heard of Pauline Hanson, and perhaps some of our readers haven’t heard of her either. With Hofer and Geert and Hanson- the MSM seem to be discovering new hitherto unknown leaders of the Alt-Right every other day. Thanks for the info!

Polls had suggested Hanson might achieve 13 percent of the vote – rather than the 4.9 percent she ended up achieving. (The party didn’t contest all seats, averaging 8 percent in the seats in which it stood a candidate.)

So why was Hanson expected to do so well? Why did she come unstuck? And could there be lessons for other countries experiencing an emboldened alt-right movement?

She made her debut pulling out a Trump-esque line in her first speech at Parliament in 1996:

“I am fed up to the back teeth with the inequalities that are being promoted by the government and paid for by the taxpayer under the assumption that Aboriginals are the most disadvantaged people in Australia.”

But making fun of Abos seems to be a national past-time in Straya’. What she said next downright Shitlordy.

“I believe we are in danger of being swamped by Asians.”

“We are in danger of being swamped by Muslims who bear a culture and ideology that is incompatible to our own.”

That’s not bad. Apparently Mrs. Hanson has been around for awhile and made polite society reach for its smelling salts on numerous occasions. The effete SWPL class of Australia apparently enjoyed mocking her and labeling her as a country rube that ran a fish and chips shop and didn’t know what the word “xenophobe” meant. In all fairness, Mrs Hanson seems a little “basic.” Like an Australian soccer mom propped up by cuckservatives too afraid to run a White Male ™.

I admit however that this is just speculation on my part…

The whole point of this article is the following:

This may be the first time the body politic has defeated the alt-right virus – and done it without the loss of too many limbs. But why?

Basically, the Lying Press thinks they’ve figured out how to defeat Putin’s elusive far-right global conspiracy because of the defeat of this one maverick in Australia.

Which brings us to what actually made Hanson come unstuck in this week’s election.

This time, no one attacked her vocabulary. There was a widespread view that mocking Hanson was bad politics: “I respect her. I respect her election,” said the Prime Minister, Malcolm Turnbull, through delicately clenched teeth. The focus, it was said, should be on policy.

And, just maybe, it worked. Policy, it turned out, was the real peril of Pauline.

Interesting. So they want a debate on policy? Careful what you wish for.

But to use a cliche, ideas are bulletproof. And the strength of the Alt-Right lies in its forward thinking and taboo-breaking RealTalk. We can talk policy all day- if the Left wasn’t so keen on no-platforming everyone to the right of 2nd term Barack H. Obama. When you label everyone that disagrees with you as a “literal Nazi,” you may end up alienating a significant part of the voting electorate who will vote out of resentment just to spite you. It seems that the Left is starting to come to a dim understanding of what truly happened with Trump. He was the Molotov cocktail of White proletariat America’s rage, right Comrade Moore?

But back here in the USA, we on the Alt-Right have very little reason to worry. The Left has unstoppered the Genie’s Bottle of identity politics and racial resentment. There is no going back. Things will continue to escalate and the Democrats won’t be able to muzzle the radical Left within their party.  They will simply alienate more and more White Americans. And we will grow as a result.

So is it disappointing that Hanson performed poorly? Eh, maybe. But did we get upset when Sarah Palin crashed and burned? Not really. And if this really was Australia’s Sarah Palin moment, then it sure as shucks isn’t a sign of what’s to come.