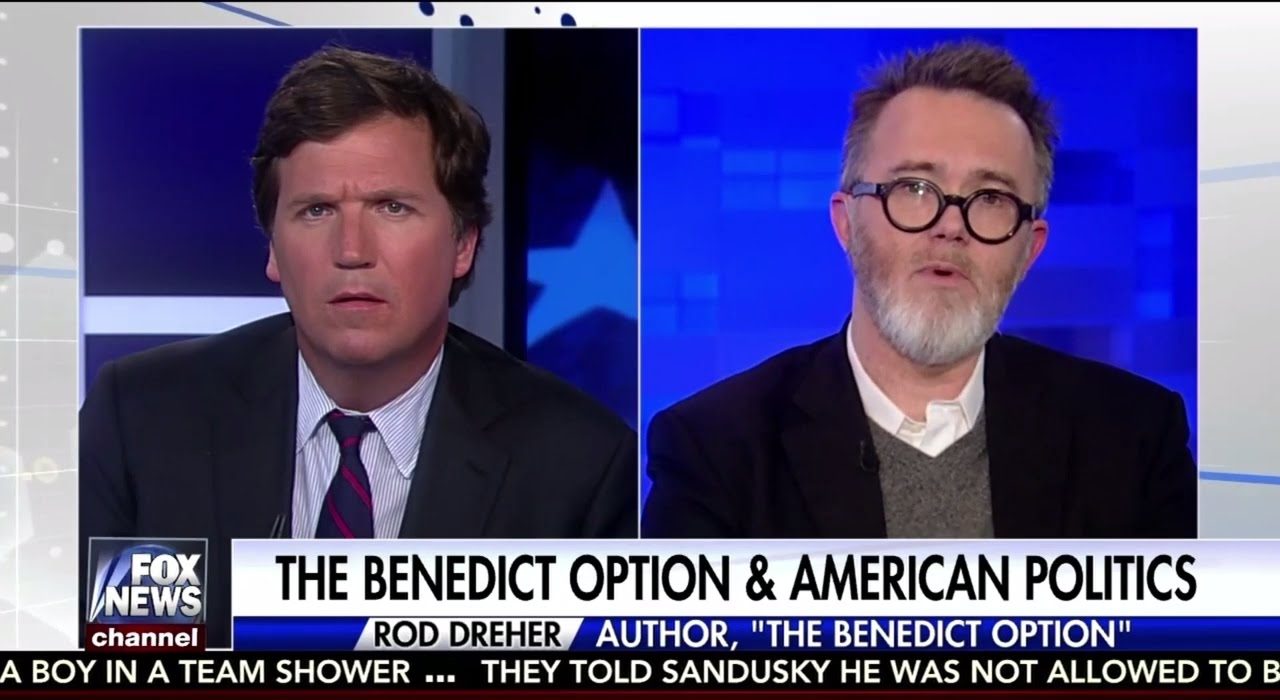 A few days ago, Rod Dreher was on Tucker Carlson Tonight to talk about his new book The Benedict Option which has finally been released.

1.) Rod Dreher is correct that Millennials have mixed feelings about Christianity. I know that is definitely true in our community. I’ve personally been alienated from Christianity. It is hard for our community to identify with Christianity given the stance its institutions have taken on race. Here in the South, this wasn’t an issue for our ancestors who didn’t see a conflict between their racial and religious identity, but now Southern Baptists are represented by the likes of Russell Moore who say polarizing things like we must choose between The Cross and the Confederate Flag.

2.) Rod Dreher is correct that Christianity is waning in American life. The Atlantic recently boasted about the decline of White Christian America. Since President Trump won the 2016 election though, I have noticed a sense of remorse developing on the Left about the decline of the Religious Right. They are now embroiled in a new kind of culture war.

3.) I have no objection to Christians decoupling their identity from the ideology of Americanism and the American state. Psychologically, the Alt-Right has already done so. What does Christianity have in common with liberalism as it exists today in the age of transgenderism?

4.) I am a big fan of Alasdair MacIntyre and agree with his analysis of the West’s moral decline.

Here is where I disagree with Rod Dreher:

1.) Rod Dreher comes across to me as a late 20th century American conservative. Everything he writes is colored by his time and place and ideology. It’s like he is pulled in two different directions. Intellectually, he is pulled away from the “mainstream.” Socially though, he has a deep desire to fit in with the “mainstream” and to be considered “respectable.”

2.) Rod Dreher subscribes to what some of us have labeled “Americanity.” He subscribes to a theology which is a product of late 20th century America. He fits in with Russell Moore’s crowd. He wouldn’t have fit it with Southern Christianity as it existed 100 years ago.

3.) Contrast Rod Dreher with Stonewall Jackson or Robert E. Lee or James Henley Thornwell or John C. Pemberton or Robert Lewis Dabney. Jackson and Lee were pious men. They were also STRONG men. If you look at Rod Dreher though, you see a WEAK man.

4.) Finally, Dreher has a completely different outlook on technology. The Alt-Right has been emboldened by technology. We have seized on technology to fight a culture war. In contrast, it seems like the Religious Right (or at least the Rod Dreher crowd) has lost its will to fight at the exact moment when liberalism has exhausted itself and has begun to show signs of weakness.