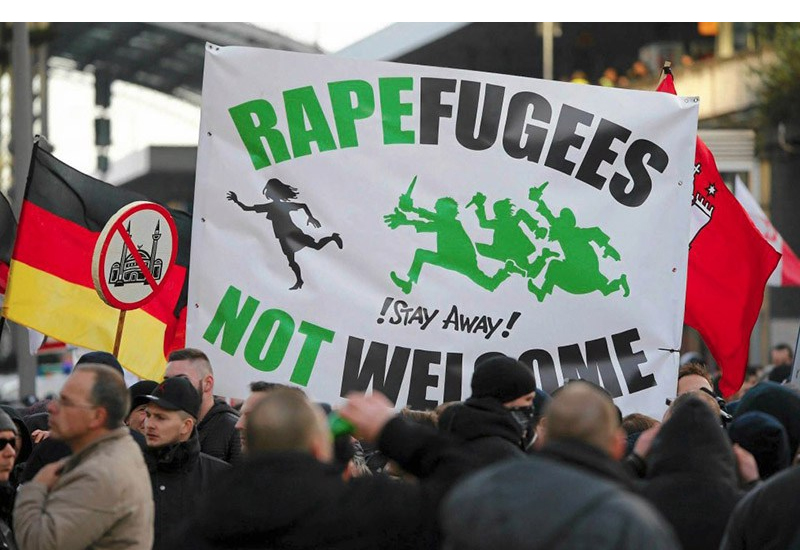 Since the sordid episode of the mass New Year’s Eve rape of 2015 in Cologne and other German cities (more than a thousand complaints), cases of sexual assaults against European women by immigrants and “refugees,” overwhelmingly Muslim, have multiplied throughout Europe, especially in Germany and the Nordic countries.

Seeing what happened at the last end-of-the-year celebrations, rapes are becoming part of the European folklore: together with the Nativity scenes, Christmas markets, and the Three Kings’ cavalcades, we will now have Mass Rapes New Year’s Eve. Traditions change from the usual gift of red underwear to the latest chastity belts. This is the march towards progress in our battered Europe.

We witness a retreat from civilization, the decline of an entire society, a rupture of the anthropological foundations of our societies. It is the return to the cave. This social collapse, this degradation of norms for coexistence, is not only a change of culture, but the implantation of savagery that we could call prehistoric. We all have in mind the classic caricature of the relations between the sexes of those antediluvian times in the scene of a troglodyte, with a club on the shoulder, dragging a woman by the hair. This cartoon represents, in a comic sense, the terrible situation to which we are forced to live, with the importation of populations manifestly unfit for modern and civilized society. From the peaks of the highest and most refined civilization that the Earth has ever carried on its surface, we have fallen into a state of semi-fearlessness. 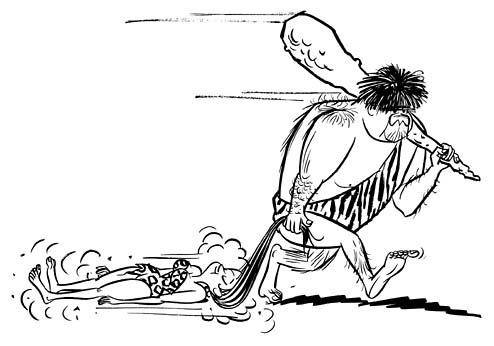 We must be clear that these are not simply criminal acts, however reprehensible they may be. Among the European population, of race and native culture, this type of aggression also occurs, although, in quantitative terms, much lower than this wave of savagery that has invaded us. But it is the qualitative nature of these violations that should be the object of special attention. In these cases, we are not facing habitual criminal acts, but cultural facts. Among us, abuses and sexual assaults against women are considered a social scourge, a highly reprehensible behavior, an improper indignity of decent people, an extreme violation of people’s freedom and dignity. In the Islamic world, where women are considered inferior to men, abusive treatment and aggression of all kinds against women do not deserve the same reprobation and condemnation as among European, Christian and modern civilized nations; they are accepted and justified facts. Therein lies the difference.

When talking about the rapes that took place in Cologne and many other places, this new paradigm of culture and civilization that is being imposed on us, there is always a malicious scoundrel that comes out with something along the lines of, “We do not stigmatize or generalize, there are also rapists among us.” Here we are confronted with what seems to be a double sign of the times: absolute stupidity and total ignorance from the one arguing such thing.

Ignorance, and even pride, comes from those who say that “we are the same, but in different clothes.” The scarce intellect of these individuals who, in fact, believe that we are all “human beings”, and that culture is something that is put on and removed, as if it were a dress or shoes, is enough to justify these events as something inherent to the human race. In particular, the culprit is described as simply male: wherever there are men, there will be violations. With this stratagem, they intend to close the case and reject any serious debate on the issue.

This reductionist and foolish way of explaining reality implies a real lack of knowledge. And ignorance is dangerous when it prevents us from seeing the truth. Culture is much more than a different “dress of civilization” in form but similar in background. (Obviously, culture is understood as the set of ideas, customs, and traditions that characterize a people.) Culture determines to a great extent the pattern of our behavior, our way of thinking and understanding life, and therefore, our way of reacting and explaining any situation. Not only is it simplistic, but also foolish, to pretend that if you pull an individual from his culture and take him to a different one, he will not have a problem adapting and assimilating the new reality as his own: his patterns of thinking, his way of reacting to certain events will always be marked by his original culture that formed him. Therefore, to argue that “there are also rapists among us” demonstrates a lack of knowledge, or rather, a knowledge indoctrinated by cultural Marxism. Violators who are “among us” know that rape is a crime, and that a rapist is a delinquent, even if this offense comes from psychiatric problems. But in other cultures, violation of women, outside their circle, is not only an accepted fact, but it is even recommended. Egyptian professor of Islamic studies Suad Saleh of Cairo’s Al-Azhar University said in a television program that Islam allows rape of non-Muslim women in war with “enemies of Islam.”

Prisoners of war are their property [of their captors]. They can be humiliated and must be owned by a warlord or a Muslim who can enjoy them as well as their wives.

To other cultures, raping women from another culture it is not an aberrant or a criminal fact, but something completely normal. There is, therefore, no possibility of comparing these mass rapes with criminal acts by Westerners. The fact that culture conditions the interpretation of what has happened can be seen in some judicial sentences in which foreign criminals have been acquitted for this reason: in their culture it is normal to do so (the day-books are full of these cases). And in the end, this is what the enlightened purveyors of multiculturalism preach: that it is necessary to understand, to excuse and, in the end, to allow such violations because in their perpetrators’ culture, it is normal. Therefore, we will also have to allow polygamy, pedophilia, cannibalism, human sacrifice… if in their culture this is also normal. We’ll get to that soon.

On the other hand, it should not be forgotten that within these cultural parameters, the concept of domination and invasion is underpinned by the mentality of newcomers to our countries. We must keep in mind that, from their point of view, Allah has given them our land, and it is a matter of time before they take possession of it. What we interpret as tolerance, dialogue, rapprochement with the Other, for them is received as submission, surrender, cession of our rights before theirs. For these people, our attitude towards them is not generosity, but submission, not humanity, but cowardice, not altruism, but weakness.

It is well known that the concept of “not offending Islam” is forcing us to give up our own customs and traditions. What is not so clear to many is that while we turn this submission into a positive, as an act of empathy and rapprochement, they interpret it as what it is: an act of submission to those who will soon be masters of this earth. All it takes is a simple internet search to see how widespread this idea is among those who come to our countries. The symbols of victory upon successfully migrating are not usually “I was able to arrive!” but rather “I have won!”, and, above all, “Allah is by my side!” We are already seeing how they reach our borders and our beaches screaming “Allah Akbar!” They do not behave as those rescued from the clutches of death, grateful for the welcome of their saviors, but as bellicose conquerors who come to take possession of what their god gives them: the goods, bodies, and lives of infidels. The rape of women from subjugated peoples is, from the beginning of time, the sign that the victor has conquered that land.

Let’s not be naive or fall into the sweet trap of the system: there are rapists here, yes. But they do not carry the background that we can find in those who come from outside. The rapists of our culture are criminals, whereas the invading rapists are soldiers of Allah. The subjection of women to the low instincts of man is among us a reason for reproach and shame. Among the Muslim invaders, it is a weapon of conquest and submission. Islamic rape is a weapon of mass domination.