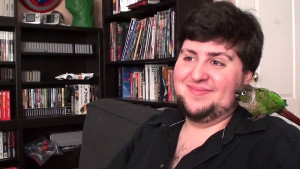 Dispatches From the Witch Hunt

Through the power of being offended, social justice warriors still smarting from Gamergate have heroically exposed the most evil men on the internet, the general staff of Youtube’s Third Reich ready to take brickbats to the nearest synagogue at the first opportunity. This is serious! It’s happening in your hometown! These notorious individuals are none other than video game commentators; Jon Jafari (also known as Jontron), Felix Kjellberg (also known as PewDiePie), and Colin Moriarty. If the careers of these men are not destroyed, there is a definite risk of a second holocaust, brought on by them cackling bigoted spells over a bubbling cauldron

Okay, now enter the real world. You’ll remember back during the release of the Ghostbusters remake, I penned a little article called ‘Big Sister & Weaponized Nerds’ discussing the broader implications of the worm turning for niche subcultures that had been largely ignored by voracious Liberalism. Then, James Rolfe (the Angry Video Game Nerd) was accused of being a “pornographic oaf” for the crime of not going to see the frankly awful film, the awfulness of which wasn’t even primarily down to the canned feminist butchery. Well, if Rolfe can’t refuse to see a movie, heaven help those who go to the controversial lengths of telling a joke or expressing an opinion that contradicts the current narrative of the #Resistance movement in the era of Trump.

Colin Moriarty made the fateful mistake of tweeting out a joke during the day of the failed #ADayWithoutAWoman protest. Women everywhere were instructed to do nothing for a day as a way of protesting how oppressed they are in first-world countries, and Moriarty’s response was that he could now enjoy the “peace and quiet”. The outrage brought about by this joke, which couldn’t be milder if it was turmeric, forced his dismissal from popular gaming Youtube channel KindaFunny (it was framed as voluntary, but the details suggest otherwise).

But Moriarty is a small fry. PewDiePie on the other hand runs the most successful Youtube account in the world with over 54 million subscribers who enjoy his LetsPlay videos. What atrocity hath he committed? Making jokes about Nazism, in the style of a shock jock. For this, Disney’s Maker Studios dropped him from their lucrative exclusive channel content operation, and he has been rabidly attacked as an anti-semite on numerous jealous game review outlets.

Jontron is a whole different kettle of fish, you see, he expressed the opinion that maybe American whites becoming a minority is not the best thing, and that maybe it’s kind of strange how Europe is being asked to take in migrants that no other set of countries would be forced to take in. He then got into an ill-advised Youtube debate with a Carl the Cuck-clone who thinks communism is “just an economic system”, that illegal Mexican migrants fuel Silicon Valley, that Ben Shapiro is part of the AltRight, and that the racist Japanese are ready to rape Nanking again. Even I might have been stumped by this level of crazy.

Needless to say, all you have to do is google these names to find article after venomous article featured on shitrags oozing forth from Gawker’s decaying mass; Gizmodo, Kotaku, Polygon, etc. All of them predict the death of these content-creators’ careers, and in fact they demand it. Clear the quarantine zone, because these three are going to the incinerator before their wickedness can spread. We all know full well that Liberal character assassination works on traditional economic targets. Forget low-level drones who dare break the laws of political correctness in the workplace, top scientists can be ousted, and famous web-developers are certainly without protection. But these targets are ultimately accountable to superiors. They cannot produce what they do without directly working for someone who can be pressured. The situation is different for online content-creators, and we may be dealing with some of the first truly high-profile attempts by Liberals to see if the same tactics can destroy them.

Freedom of speech is never at issue because freedom of speech doesn’t exist in any real sense other than the legal one. Just as I’m not re-assured I won’t be mugged because mugging is illegal, so too am I not re-assured that I can speak freely just because the law declares I can. This is a juvenile take on principle in practice. What free speech you can exercise is determined by power, if we measure power in this instance as the inability of others to interfere with our lives and drive up the cost of such speech to unacceptable levels. “Freedom of speech doesn’t mean freedom from the consequences of speech!” cries the blue-haired feminist as you clear out your desk. Very true, but what exactly is the difference between a legal cost and a private cost of speech? Especially if the legal cost is a fine, the penalty can actually be entirely equivalent in the form [$ lost income from being fired = $ government fine for hate speech]. Different mechanism, same result. In this sense, no speech is ever free in terms of principle, only in terms of power. Employees are especially vulnerable to this power relationship, as has been shown, but content creators (so long as they have some kind of platform, which the internet more or less provides) can make their living whilst only being accountable to a fanbase. Convincing 54 million people that PewDiePie isn’t entertaining is harder than convincing a handful of shareholders that Brendan Eich is a liability. Thus it may in fact be the case that Jontron, PewDiePie, and Moriarty (if he goes on to create content independently) have unexpectedly high power levels due to the method via which they can operate.

All of this justifies the insanely hyperbolic reaction of their critics to what are objectively milquetoast infractions, and of course hundreds of mid-tier Youtubers are jumping on the bandwagon in hopes of scoring good-boy points. The problem they’ll have with an overwhelmingly white male subculture, is that more people will likely agree with the other side when the facts are laid out. The Nazi card is a good fallback, but as has been explored before, it isn’t very convincing to younger generations who struggle to identify which country the Nazis were from. PewDiePie has already parodied these accusations by releasing a video in which he simulates shooting Hitler’s henchmen, only to find himself fading from the present in the style of Marty McFly.

If these three pull through without being reduced to detestable beggars, then the emperor has no clothes and you can expect perhaps a greater cultural presence for rightist perspectives, both in the realms of satire and seriousness, since the fear surrounding their vocalization won’t be so harrowing. In the case of Jontron, he is being attacked for stating an obvious truth, and the viciousness with which he is being torn down is likely going to anger a lot of people. The globalist shills are in a tailspin, humiliated by their inability to halt both the will of Brexiteers and the panache of Donald Trump. If the left can’t burn three wicked witches who review video games, then I guess they really don’t make puritans like they used to.

TopicsJonTronPewDiePieVideo Games
Share on FacebookShare on TwitterShare on RedditShare on VKontakte