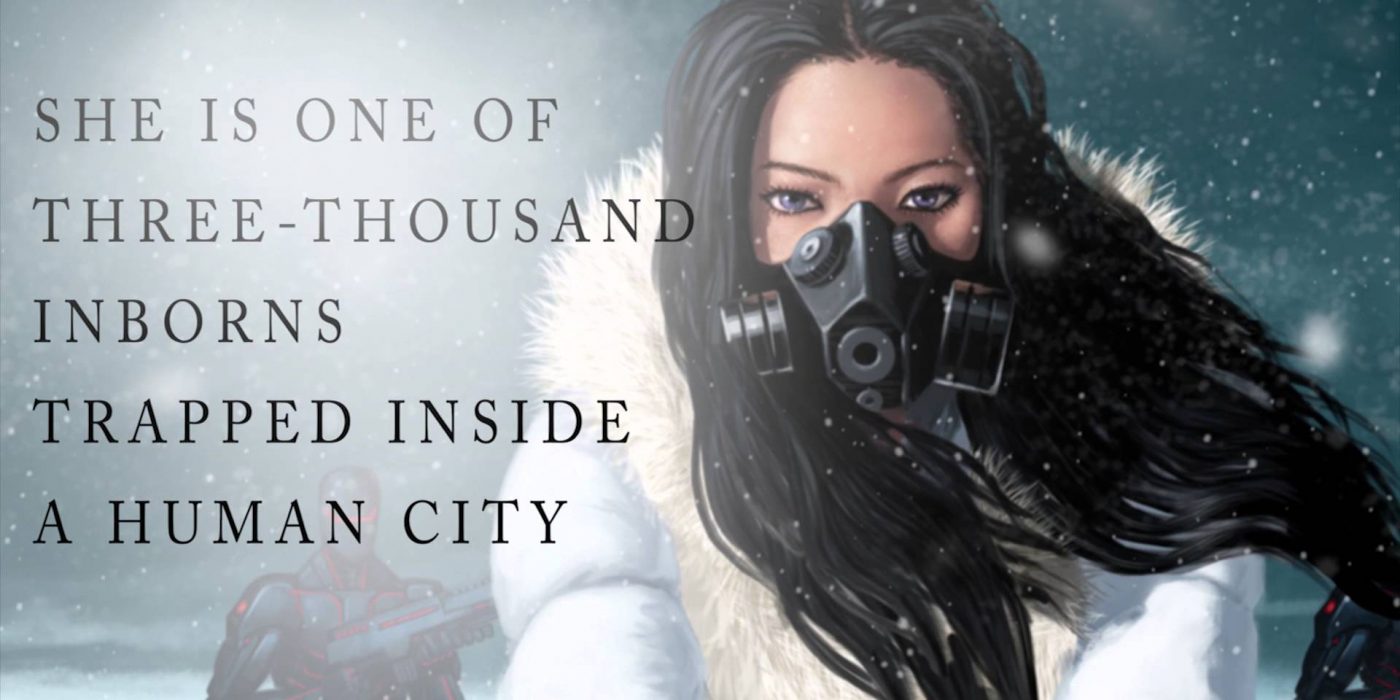 Before breaking straight into a review of Hatred Day, the first instalment of the Pettibone sisters’ sci-fi/fantasy series centred on a young female protagonist, it is worth dedicating some attention to the authors themselves (T.S. Pettibone being the nom de plume of identical twins, Brittany and Nicole Pettibone).

Here at AltRight.com, a site primarily dedicated to providing an alternative political commentary on global events and culture, it is a given that the books featured and reviewed will have a link to the rest of the content displayed. In this particular instance, that link is the authors themselves.

Brittany has appeared on Red Ice Radio to promote the book while also engaging in discussions on President Trump, cultural Marxism and demographic transformation. She is also a regular hostess of the ‘Virtue of the West’ podcast alongside Reality Calls, and both sisters have openly conveyed their support for Trump when interviewed by InfoWars.

So does this make them literary vanguards for the science-fiction/fantasy readers of the Alt-Right? The simple answer is no. However, one would assume that, given their more astute political position-taking and general worldview, they would produce material that was free from attempts at deconstructing traditional societal values and enforcing a liberal agenda.

Although the Pettibone sisters are clear advocates of a saner society than the currently established Western world, one would be mistaken to expect even an implicit pro-white, or even pro-Western, agenda to manifest itself in the book. Personally, I wasn’t expecting The Turner Diaries (and thankfully, this was far from that), but I had prepared myself to pick up on some underlying conservative message. I never found one and, in some instances, picked up instead on the odd argument being made in favour of more liberal politics. I hasten to add that this in no way detracts from the book. Perhaps I had just made the mistake of setting up a certain frame of mind before reading Volume I (since I had learned of the book and the Pettibone sisters through Brittany’s interview with Lana Lokteff).

Without revealing any spoilers, the book revolves around protagonist Snofrid Yagami, a member of a powerful alien race known as the ‘Inborns’, who finds herself in a slum on Earth being primed for sale at a slave auction. To make things worse, Snofrid has had her short- to medium-term memory wiped. The Inborns, having arrived unwelcome on Earth (and causing substantial ecological damage and social upheaval in the process), seem to have engaged in an uneasy peace with humankind. Snofrid is ultimately rescued from the auction and sets about retrieving her memories. At about this juncture in the story, the son of a prominent human authority figure is murdered and social tensions increase as the Inborns are suspected of the crime. From this point onwards, Snofrid endeavours to do all she can to save herself and her motley crew of family members from the dangers not only emanating from their proximity to the humans, but also from the threat posed by members of her own species. This is not to say that she becomes a gun-toting, skull-cracking female warrior. Nicole and Brittany ensure that Snofrid is realistically depicted as an intelligent female lead who knows that, like each of us, she has her limits and inherent weaknesses. Her entourage is there to protect her when violence ensues (although that is not to say she does not find herself alone in perilous situations whereby she has to rely on her other skills to survive). Thankfully, Hatred Day is free from the feminist woMAN ideal that is pushed in mainstream entertainment.

In terms of style, syntax and rhythm, Hatred Day is well written. The vocabulary is descriptive without being flowery and excessive, and although this is typically true with seasoned writers, I feel it should be highlighted here since this is the first tentative step into the world of fiction for Nicole and Brittany.

Personally, I found the story to be well paced with the right sprinkling of increased tempo where action and uncertainty called for it. However, I have seen other reviews criticizing an element of slowness to the story which may be symptomatic of a young generation yearning for instant gratification that books are not known to typically provide. Or perhaps I am more comfortable with a novel which, containing slower pacing interspersed with bouts of breakneck violence, marches inexorably towards a climax rather than sprints to it hurriedly. Either way, I was comfortable with the tale’s pace.

Another likely cause for a sacrifice of pace could be due to the strong character-building that takes place within Hatred Day. Each personality is different, easy to identify, and I found myself interested in the backstories that accompanied protagonists and antagonists alike. This was especially the case where Snofrid and Lycidius (Snofrid’s main romantic interest) were concerned. Central players in the story exhibit genuine and realistic emotional responses to the circumstances and events surrounding them. Dialogue is elegantly crafted and unfettered, thus enabling closeness to certain characters which is an element that I have found lacking in other sci-fi/fantasy novels. Attracting and maintaining a reader’s attention to character development is not always an easy feat. This could stem from a female biological propensity to analyse and value personality traits but I’ll leave that controversial topic for another day.

Hatred Day is not without its faults, however. It often feels like the Pettibone sisters set out to take on a little too much at times, or had flights of fancy that ran away from them. This is evident through not only the thick array of subplots, but also through the different types of Inborns and Inborn artefacts that make appearances throughout. We are initially told that there are five varieties of Inborns but that these break into further groups depending on the individual’s powers and choices to take on other powers and forms. Suffice it to say, I could not remember the exact differences, only that Snofrid was able to display the Wolverine-like ability to self-heal. In terms of artefacts, the ‘Mania Mirror’ that makes an appearance later in the book would be a prime example (by itself it would be acceptable, but it was not an isolated case – many spells, talking books and electronic gadgetry seem to appear just when they are needed). Many of the subplots are intriguing, but there is a fine line between quantity and quality that the authors slightly overstep. Sadly, this can force the reader to sometimes flip back to previous pages to make sure they are following and understanding correctly.

I mentioned above that Hatred Day seems to downplay the nationalist message and even takes shots at many proponents of what the Alt-Right supports. There is a focus on the range of different ethnicities all inhabiting the same localised area (though a fervent endorsement of multiculturalism is fortunately lacking). My biggest gripe would be (again, purely in the form of an Alt-Right critical analysis) that the humans are often painted as being hateful vitriolic peoples for resenting the sudden presence of Inborns on Earth. The writers go as far as to have the humans perform Nazi era-esque blood tests (à la The Thing) to weed out Inborns (humans and Inborns resemble each other physically). There are also random firing squads, the Ausch-I mean, Minos death camp, and a ghetto where many Inborns reside (Warsaw anyone?). At one particularly frenetic moment, a 10-year old is shot purely for being an inborn. Mixing of humans and Inborns is depicted as abhorrent by both groups and, when elucidated, made out to be some simple-minded manifestation of unfounded prejudice rather than a genuine grievance and something to be actively discouraged in the name of preserving identity, common history and shared culture. The book underlines that this view held by humans and Inborns is unjust and that things would be much better for the characters to whom we have emotionally bonded if this stigma was not extant in their World (and therefore, perhaps in ours?). It may be my own personal paranoia from having read so much liberal material when I was younger, but it felt at times that the underlying message in the book could very well be anti-populist. As if pain and suffering was the only end result of a self-identifying group striving for their own self-determination. Time and future novels will tell, and I’m sure somebody will have picked up on a theme that is the opposite of the one I just expounded. Such is the beauty of written art.

In conclusion, the book is a strong first step despite sporadic examples of overreaching and a sometimes muddled plot, and I shall certainly be reading the second novel once released. But for those looking for a strong pro-nationalist, pro-ethno-centrist or even pro-right wing subtext mixed in to their light reading, I would advise looking elsewhere.

Hatred Day is available to buy.

the authorMartel Mosley
A beleaguered Brit doing all he can (which is never enough).
All posts byMartel Mosley