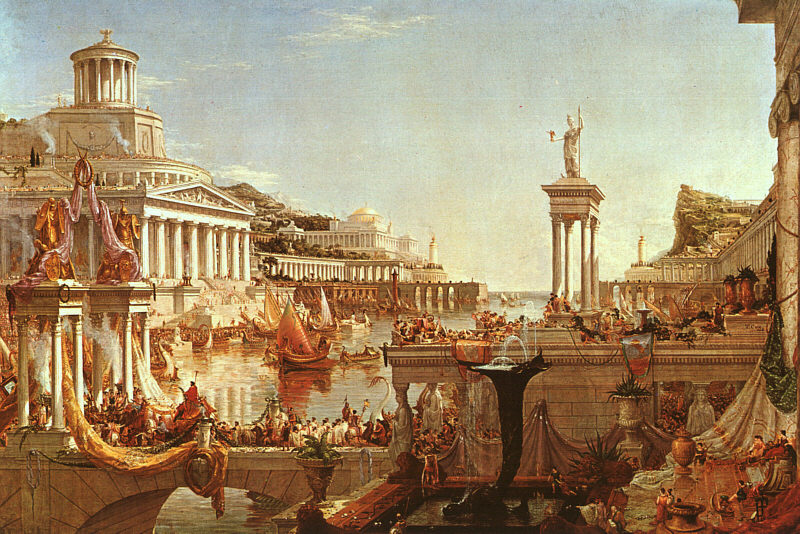 The State Waits for Us

People like us thrive on the seeming impossibility of our goal, and may be attracted to it partly because we’re told by voices of authority that it is forbidden. We are inspired, not discouraged, by the remoteness of our shared ambition, which will render its eventual accomplishment truly sublime.

We are building the ethnostate, a community and political entity in which our people and identity come first and form the basis of every question asked and every answer given.

The ethnostate is not an idyll, free of problems and tensions. But it is a setting in which we overcome our disputes on our own terms, without having to repeatedly renegotiate the presence and demands of other peoples who don’t share our interests and frequently manifest open hostility and even violence towards us.

Right now our leadership exists almost exclusively in social and intellectual spheres. Figures like Richard Spencer aren’t involved in formal politics, hold no official role or office, and don’t partake in the administration of the state as it is currently constituted.

It’s interesting and a little tricky to imagine how things would go if one of our people held office. But at present, with singular and ambiguous exceptions, no one in the apparatus of government is clearly advancing our project and ideals.

Although I occasionally hear suggestive rumors that some in the government are aware of us and in sympathy with our cause, suggestions of an animate internal conspiracy with a likelihood of success are chimerical–any attempt to advance our ideas in a subterranean way would be quickly discovered and suppressed, and would set us back greatly, perhaps irrevocably.

By now I’m woven into the fabric of the movement, which has increasingly displaced my “normal” existence and become my social reality. I’ve chosen the company of those who appreciate the obstacles I’ve just highlighted and continue to resist the anti-white multicultural establishment in spite of them, and perhaps even because of them.

People like us thrive on the seeming impossibility of our goal, and may be attracted to it partly because we’re told by voices of authority that it is forbidden. We are inspired, not discouraged, by the remoteness of our shared ambition, which will render its eventual accomplishment truly sublime.

But to those who remain on the sidelines of this project the matter likely appears differently. Especially to the class of people who share our frustrations with the multicultural hassle but have as yet declined to take consequential steps towards networking, organizing, and advancing our message in the marketplace of ideas and political causes, it may be difficult to justify enlisting in an undertaking whose success seems unimaginable.

Indeed, on what conceivable timeline of events could the hostile Jewish-multicultural state, with all of its kept officers, bureaucrats, and monolithic institutions, be either displaced entirely or remade into something that serves our people? To state the matter this way is to be instantly stalked by a bogeyman of inescapable hopelessness and discouragement.

Much of the weight of this discouragement has to do with the massive reality of the state itself. Say “ethnostate” and you immediately enter a long-running historical dialogue of statehood in which all the forms and roles are established … and in the possession of people who hate us. This dialogue of statehood puts us on the back foot from the start, since it seems to beg the question: if our ideas are so potent and essential, why are they wholly divorced from state power? Further, aren’t our aims and beliefs mooted and irrelevant until they are adopted by the official ministries of the state?

The problem reminds me of the conundrum I faced in college when I sought part-time employment and learned from the proprietor of a Red Lobster that I would never be able to work as a server because I lacked experience as a server. Identitarian movements are apt to rut themselves in a similar catch-22, wondering how to become an institution they are forbidden from becoming.

But it is vital to recall that none of the political grammar, theory, or official bureaucratic forms which we now inherit as “the state” existed when its early actors and theorists began to call it forth from the background of feudal Europe. Though Machiavelli and his intellectual compatriots harkened back to ancient forms, they could only look forward to the Leviathan under whose weight we have now lived for generations.

When considering the legacy of their written works, it may bring us nearer to their ultimate meaning to discard our later, prefabricated notions of statehood and instead give “state” its actual primary meaning of “condition.” Thus, when Machiavelli refers to the city-state, it’s more accurate to picture the broad and narrow circumstances of political authority in and around the city, instead of hearing “city-state” as a definitely-boundaried object that necessarily must be left or taken on its particular terms if it is to be conceived at all.

In other words, it is no decisive disappointment that we aim for a state yet appear far from attaining any official “state” heraldry or title. In articulating our aims, broadcasting our message, and attracting public attention, positive or negative, to our concerns and notions of political good, we are already having a palpable effect on the state–the conditions–of political reality.

We will capture office and give our ideals institutional reality within our lifetimes. But our endgame isn’t a Governor’s letterhead or a Senator’s magic underpants. Instead we want the sun to finally rise and shine upon a blossoming glory of our thriving people, worthy of the epic expression of a Virgil or Thomas Cole rather than an Andy Warhol or Terry Richardson.

The more our identitarian ideals influence background conditions with the sort of energy, momentum, and vitality with which they dominated the past year, and the more only we can supply answers to the vital question of our civilization’s existence, the more we will simply become the circumstances of political truth and authority–that is, the state.

Topicsethnostateidentitarianism
Share on FacebookShare on TwitterShare on RedditShare on VKontakte