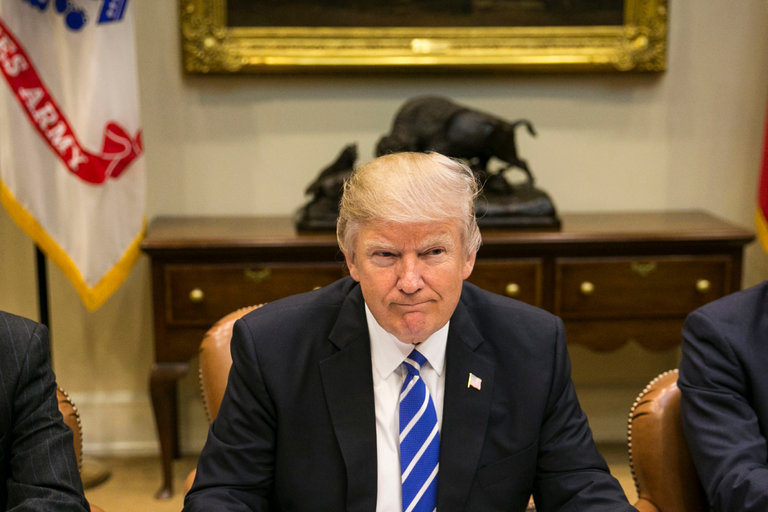 President Trump has signed a new executive order which is a second attempt at the Muslim ban:

“WASHINGTON — President Trump on Monday signed a revised version of his executive order that would for the first time rewrite American immigration policy to bar migrants from predominantly Muslim nations, removing citizens of Iraq from the original travel embargo and scrapping a provision that explicitly protected religious minorities.

The order, which comes about a month after federal judges blocked Mr. Trump’s haphazardly executed ban in January on residents from seven Middle Eastern and African countries, will not affect people who had previously been issued visas — a change that the administration hopes will avoid the chaos, protests and legal challenges that followed the first order. …

The indefinite ban on refugees from Syria also has been reduced to a 120-day ban, requiring review and renewal. The new order retains a temporary ban on all refugees.”

The New York Times has a useful breakdown of the changes from the original ban. It is pretty much the original Muslim ban except for removing Iraq from the list of countries and in how it doesn’t apply to current visa holders. It bans immigration from six Muslim countries.

Is this everything we wanted? No, but it is an important first step and the Trump administration should be congratulated for setting a precedent and changing course in our immigration policy. This is who we are. We have taken the first step forward to taking our country back.

We don’t want to be the universal proposition nation based on abstract liberal ideology, a “nation of immigrants” and miniature United Nations, that JFK redefined us as being in the Cold War era. That’s not who we were throughout the vast majority of our history. JFK’s A Nation of Immigrants was part of the ADL’s “One Nation Library” which included other titles like Oscar Handlin’s American Jews: Their Story and Ashley Montagu’s What We Know About Race.

We stumbled toward a policy of immigration restriction over the course of several decades. The same is true of the liberal immigration policy we adopted in 1965. The Magnuson Act of 1943 repealed the Chinese Exclusion Act and permitted Chinese nationals to become naturalized citizens. The McCarran-Walter Act of 1952 lifted the ban on Asian immigration established by the Asian Exclusion Act and removed whiteness as a criteria to become a naturalized citizen for the first time in American history.

These small moves can have much broader consequences. In the 19th century, the Page Act which the harbinger of a restrictionist era in American immigration policy.