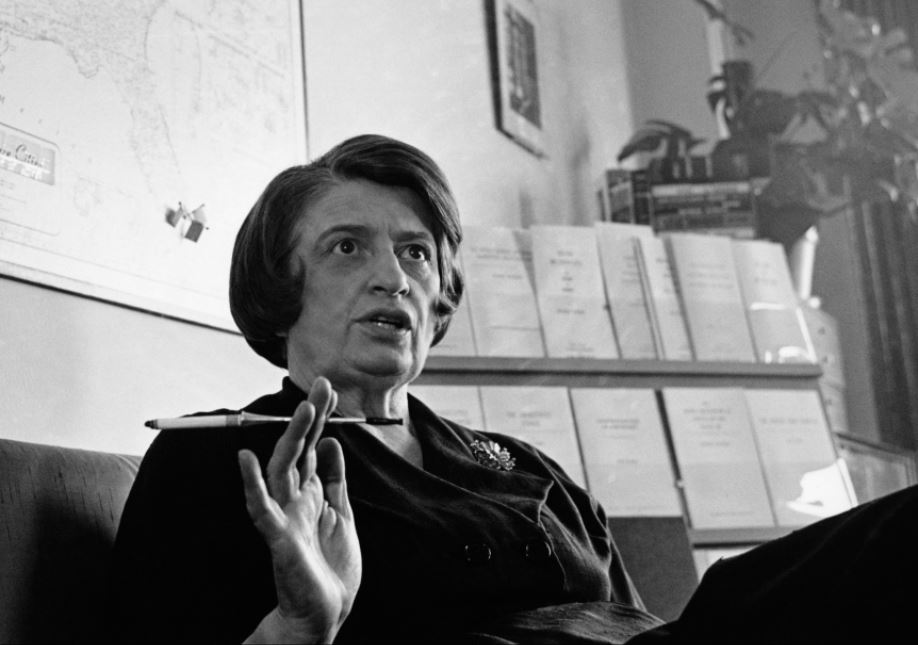 The Washington Post has a new article on how liberals will come to miss Ayn Rand whose influence over the American Right has been dethroned by the Dark Enlightenment:

“Now Rand is on the shelf, gathering dust with F.A. Hayek, Edmund Burke and other once-prominent conservative luminaries. It’s no longer possible to provoke the elders by going on about John Galt. Indeed, many of the elders have by now used Randian references to name their yachts, investment companies and foundations.

Instead, young insurgent conservatives talk about “race realism ,” argue that manipulated crime statistics mask growing social disorder and cast feminism as a plot against men. Instead of reading Rand, they take the “red pill”, indulging in an emergent internet counter-culture that reveals the principles of liberalism — rights, equality, tolerance — to be dangerous myths. Beyond Breitbart.com, ideological energy on the right now courses through tiny blogs and websites of the Dark Enlightenment, the latter-day equivalent of Rand’s Objectivist Newsletter and the many libertarian ’zines she inspired.

Indeed, the new ideas on the right have moved away from classical liberalism altogether. American conservatives have always had a mixed reaction to the Western philosophical tradition that emphasizes the sanctity of the individual. Religious conservatives, in particular, often struggle with Rand because her extreme embrace of individualism leaves little room for God, country, duty or faith. But Trump represents a victory for a form of conservatism that is openly illiberal and willing to junk entirely the traditional rhetoric of individualism and free markets for nationalism inflected with racism, misogyny and xenophobia. …”

This article reminded me of something that John Morgan had said in his recent speech that was published on Counter-Currents:

“The Alt Right is a much trickier animal to pin down. The New Right has produced literally hundreds of books outlining its beliefs and positions over the past half-century. The Alt Right, on the other hand, is a culture primarily of blogs, memes, podcasts, and videos. It has yet to produce a single book or other statement of principles that everyone involved would agree is the quintessence of the Alt Right’s worldview. This is a natural outgrowth of the anti-intellectualism inherent in Anglo-American political and cultural discourse, as opposed to the more innovative and livelier – dare I say superior – Rightist political tradition that you have here on the Continent. In attempting to think of a book that could in any way lay claim to being the Alt Right manifesto, the only thing I could come up with is Greg Johnson’s New Right versus Old Right, which has fortunately been translated into Swedish as well. Otherwise, the shelves of the Alt Right library remain pretty bare, although hopefully that will soon be changing. …”

What should we make of this?

I would say that a book is a vehicle for a type of discourse. Ayn Rand’s various books were vehicles for “Objectivism.” A highly trafficked blog, a meme, a podcast, a video, a forum, a song or a viral tweet are similarly vehicles for a discourse. In fact, I would argue that memes, podcasts, videos and songs are more expressive and powerful mediums than text. They are less abstract and more accessible to the average person. They are easier to share, reach a wider circulation and have a greater impact on culture.

Politico has a new story on World War Meme:

“NEW YORK—Parked in front of a seductive portrait of Ann Coulter and an array of computer screens inside a home office in Harlem, Matt Braynard, former director of technology for Donald Trump’s presidential campaign, welled up with emotion as he recounted his experience attending Trump’s inauguration a week earlier.

It was not the ceremony itself, but what happened afterward, when Braynard spotted a pale teenager in a red hat and a gray hoodie standing on a street corner near the Capitol holding a sign with a picture of a cartoon frog and the message “LOVE NOT HATE.” Struck by the display, Braynard made a beeline for the kid, shook his hand and enlisted his wife to take a photograph of them together.

“I felt like I had found a friend that I hadn’t spoken to in a long time,” recalled Trump’s misty-eyed onetime data guru, who had never met the teenager before in his life. “It was, like, immediate connection.”

The chance encounter was a rare in-real-life meeting of veterans of the Great Meme War. …”

In hindsight, the forum archipelago we had in the 2000s were hatcheries of Alt-Right discourse. 4chan and the impact it has had on internet culture is another example of this.

The Alt-Right’s online counterculture grew organically out of messageboards, blogs, podcasts and social media. It spread through comment sections and colonized the internet in thousands of conversations. It skipped the think tank stage because thousands of people were already online, sharing their ideas, interacting with and being influenced by each other. Instead of being spread in the form of a book, the Alt-Right has reached the stage online where it is a neverending stream of content.

I do think we should have more books though. I’m guessing the pull to write a book is offset by the push to put out new content on a daily basis. I know that is true in my case.