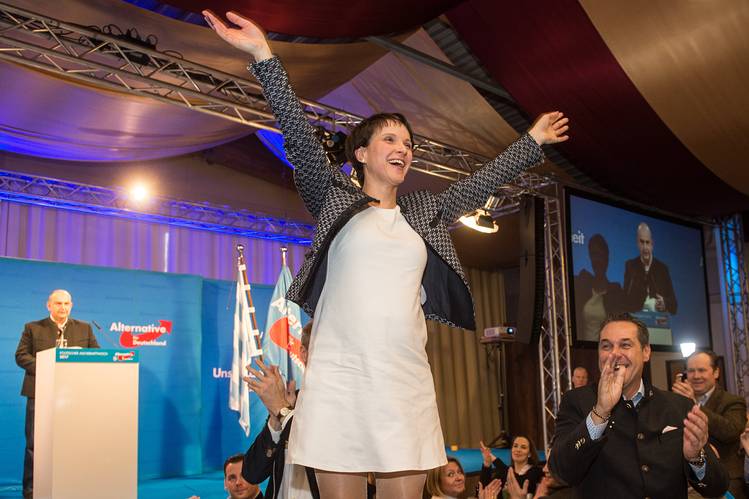 As I said on Twitter, the major divide of the 21st century is nationalists vs. globalists. It isn’t nationalists vs. nationalists anymore. We’re fighting for the survival of our entire civilization. We’ve learned from past mistakes and moved on from litigating old quarrels:

“History is a whore of politics,” Björn Höcke, one of the party’s most radical politicians, said in an interview. “A great people like the German people, which lost two world wars in one century, no longer has a historical narrative of its own.”

In an ornate Dresden ballroom in January, local AfD candidate Jens Maier told the crowd that what he called Western Allies’ re-education efforts after World War II led to Germans being convinced “we are bastards, criminals, that we are worth nothing.”

As his voice rose, Mr. Maier hollered into his microphone, to applause: “I hereby declare this cult of guilt to be over! To be over, once and for all!”

To a political establishment for which Holocaust remembrance is an integral part of public life, the AfD’s break with the consensus is a shocking turn. …

The AfD is the most successful party to have arisen to the right of Germany’s mainstream conservative bloc, which Ms. Merkel now leads, since World War II. For decades, far-right parties failed to gain a foothold in Germany. Leading conservative politicians made it their stated mission to prevent the rise of nationalist movements. …”

It is the same struggle there though. I’m told Sweden is a country overrun by McDonald’s and Third World refugees. Does that sound familiar? In the 21st century, Swedes live under the same Iron Curtain of political correctness, multiculturalism and mass immigration as the British, the Germans and the Americans. Do you know who really lost the World Wars? It was all of us.

Think about it: whether it is Australia, Canada, Ireland, Sweden, Spain or Greece, we’re all being dispossessed in our homelands by the same class of people who represent the same system. Why are the Swedes so self-hating? What did they do to deserve this? They didn’t even participate in the Second World War. They didn’t have large overseas colonies.

Note: “Conservative” parties everywhere exist to defend the liberal status quo. Angela Merkel is a “conservative.” ¡Jeb! is a conservative.

Note: In light of their staggering losses, I’m not sure I would call Jews the victor of the Second World War, but the creation of Israel was a result of that conflict. They certainly emerged from the war far more powerful and influential in the West than they had been before it.