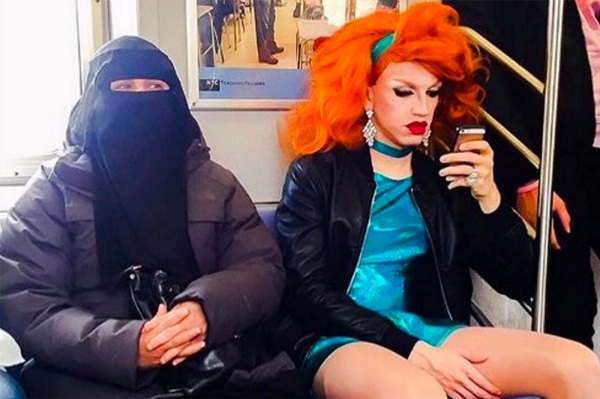 This Is The Future Liberals Want

This scene on a New York City subway became a viral /pol/ meme:

“When Sam Themer rode the subway dressed in drag last week—red wig, turquoise dress, face painted with make-up—he never considered that someone might photograph him as he commuted from Queens to a drag queen gig in Manhattan, sitting next to a woman wearing a niqab. …

A week later, it was appropriated by the alt-right for mockery and derision on 4chan’s “politically incorrect” /pol/ News Network message board, then tweeted by an account of the same name with the caption, “This is the future liberals want.” …

Until this week, Themer had never been targeted online, but nothing about the alt-right’s intolerance surprised him.

“On election night, I was sitting comfortably in a red, white, and blue pantsuit assuming Hillary [Clinton] was going to win,” he said, “but when that didn’t happen it really woke me up to the fact that all of this hatred exists throughout America.”

More surprising were the number of ordinary people who shamed the bigoted shamers. The alt-right meme of Themer was re-appropriated as a progressive rallying cry turned viral Twitter moment that was still trending on Friday afternoon. …”

According to The Daily Beast, it has been reappropriated “as a progressive rallying cry.” Progressives have embraced the image as an accurate representation of their ideal.

Why does this image strike such a chord? From an Alt-Right perspective, it is a drag queen seated next to a Muslim wearing a hijab. Both images are profoundly alien in their own way. The drag queen represents the degeneration of our traditional culture while the Muslim wearing the hijab represents its replacement by foreigners. The message is that liberalism is a cultural disease.

“This Is The Future Liberals Want” means liberalism destroys the social fabric. It makes us sick. We lack the will power to perpetuate our own existence. I haven’t seen this spelled out anywhere.