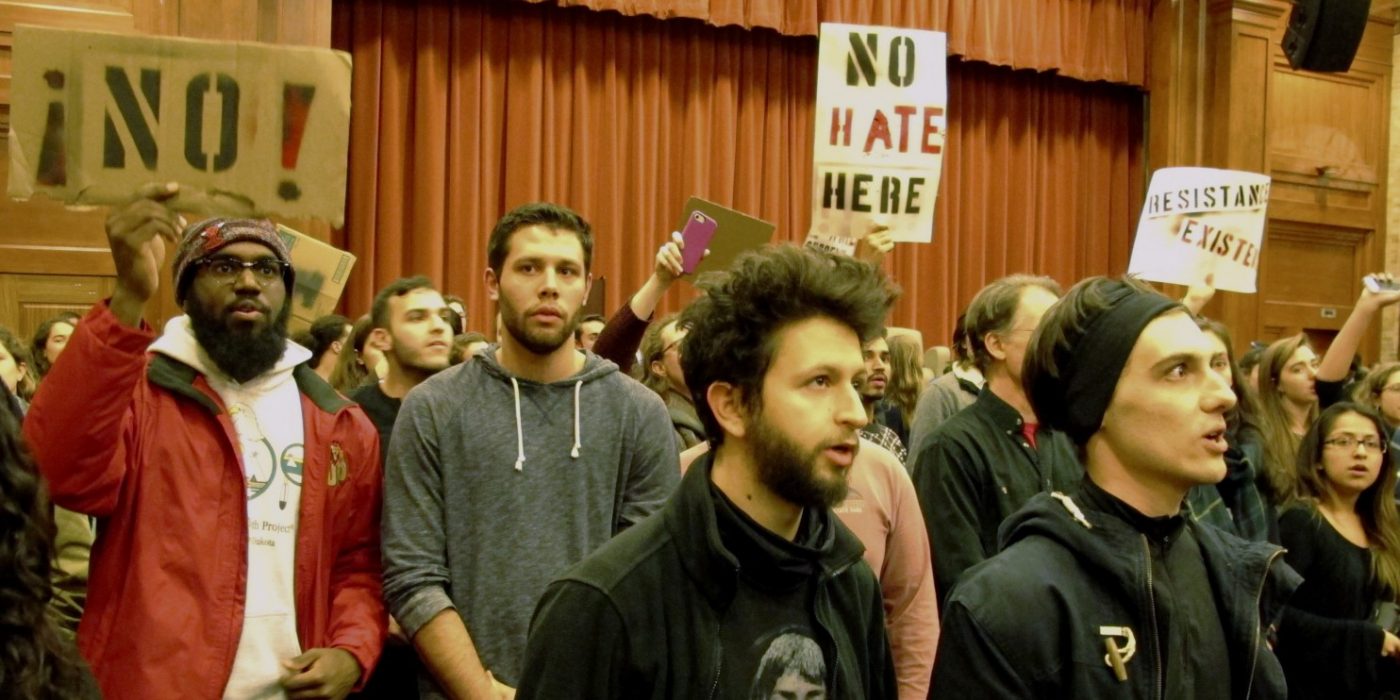 I wish I could say that I sympathize with Charles Murray:

“MIDDLEBURY, Vt. — Hundreds of college students on Thursday protested a lecture by a writer some called a white nationalist, forcing the college to move his talk to an undisclosed campus location from which it was live-streamed to the original venue but couldn’t be heard above protesters’ chants, feet stamping and occasional smoke alarms. …

Middlebury College students turned their backs on Murray just as he started to speak Thursday and chanted “Who is the enemy? White supremacy!” ‘’Racist, sexist, anti-gay, Charles Murray, go away!” and “Your message is hatred. We cannot tolerate it.”

They continued their chants until the college announced that Murray would speak from another location on campus. Students continued their protests, drowning out the talk.

More than 450 alumni also signed a letter calling the decision to have Murray on campus “unacceptable.” …”

Here is the letter signed by the 450 alumni:

We are Middlebury alumni/ae who were disappointed, confused and alarmed to learn that Charles Murray has been invited to speak at our alma mater. The Southern Poverty Law Center considers Dr. Murray a “white nationalist” who “us[es] racist pseudoscience and misleading statistics to argue that social inequality is caused by… genetic inferiority.” Why has such a person been granted a platform at Middlebury?

Since Dr. Murray’s views are not worth engaging on these grounds, this can hardly be called an occasion for open, rigorous academic debate. His invitation to campus, then, is not an educational opportunity, but a threat. It is a message to every woman, every person of color, every first-generation student, every poor and working-class person, every disabled person and every queer person that not only their acceptance to and presence at Middlebury, but also their safety, their agency, their humanity and even their very right to exist are all up for “debate.” As a coalition of eight Middlebury student organizations wrote in Beyond the Green in 2016: “When you ask us to consider the other side of the argument, you are asking us to consider our assumed inferiority as a logical position. In no way does this consideration further our (or your) education.” In this case, there’s not really any “other side,” only deceptive statistics masking unfounded bigotry. In the context of Middlebury, Dr. Murray’s pseudo-scholarship is not merely pseudo-scholarship. It is intimidation. …”

I need never tweet about Trump again, because @StephensWSJ conveys precisely what I think & feel. Nothing to add. http://t.co/6N34bf2CYV

@charlesmurray Duly noted. We will remember that when the SJWs come for the author of The Bell Curve

I despised Trump and everything he represents before he was even born. https://t.co/G6n2m6g3At

This is a man who has spent over a year on Twitter counter-signaling President Trump, the Alt-Right and White Nationalists at every opportunity that has presented itself. He wrote a whole book, Coming Apart: The State of White America, 1960-2010, which was solely about Whites because he was too afraid of being called a racist to write again about the black underclass. He is not one of us. His real friends are establishment neocons like Bret Stephens and Bill Kristol.

If those people want to rise to Charles Murray’s defense, the people who sit on AEI panels and call for the “lazy, spoiled White working class” to be replaced by Third World immigrants, they can do so. As I told him on Twitter, we will remember everything he has said about us. Eventually, the same SJWs who destroyed the career of his protégé Jason Richwine were going to come for the author of The Bell Curve, even if he is on Twitter every other day denouncing President Trump.

Without further ado, I present to you “Racist, sexist, anti-gay, Charles Murray, go away!”

Update: The snowflakes are screaming chants about “ableism” and “homophobia.” Yes, we’ve reached the point where the concept of physical disability – the inequality that inevitably results from “a limitation on a person’s physical functioning, mobility, dexterity or stamina” – has become an affront to political correctness and egalitarian dogma and is classified as “hate speech.”