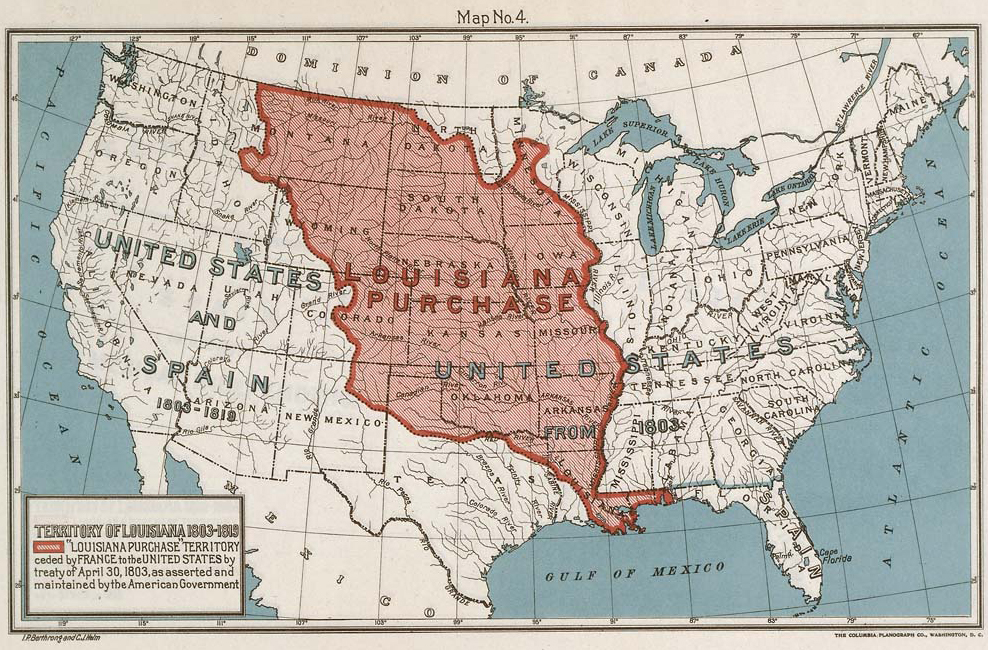 An Alt-Right Take On The Louisiana Purchase

Over at Slate, Robert Lee is lamenting the imperialism of the Louisiana Purchase:

“It’s a familiar chapter in our history, part of the triumphant narrative of westward expansion: In 1803, the United States bought a massive chunk of North America, and we got it for a song. Spain had ceded the Louisiana Territory to France, and Napoleon, in turn, offloaded it to American diplomats in Paris after the Haitian Revolution ruined his plans for the New World. Vaguely defined at the time as the western watershed of the Mississippi River, and later pegged at about 827,000 square miles, the acquisition nearly doubled the national domain for a mere $15 million, or roughly $309 million in today’s dollars. Divide the area by the price and you get the Louisiana Purchase’s celebrated reputation as one of the greatest real estate bargains in history. …

But the traditional narrative of the purchase glosses over a key fact. What Thomas Jefferson purchased wasn’t actually a tract of land. It was the imperial rights to that land, almost all of which was still owned, occupied, and ruled by Native Americans. The U.S. paid France $15 million for those rights. It would take more than 150 years and hundreds of lopsided treaties to extinguish Indian title to the same land. …

Even at $2.6 billion for all of it—or $8.5 billion, adjusted for inflation—the Louisiana Purchase remains an unbelievable steal. But not of the type we’ve been taught, a fleecing of the shortsighted French. To cherish the Louisiana Purchase of 1803 as one of history’s great real estate deals requires buying into a myth. The acquisition of France’s pre-emption rights in 1803 was a down payment on a continental empire that ran through Indian country. The land came cheap because of how little the United States paid the people who lived here long before the French laid claim to Mississippi’s western watershed. …”

There is a cool animated video over there showing how each parcel of land in the Louisiana Purchase was ceded and sold by various Indian tribes to the US federal government. This went on over a period of 166 years from 1804 to 1970. Lee arrives at a grand sum of $8.5 billion adjusted for inflation that was paid by the US federal government for the Louisiana Purchase. That is a fraction of the more $100 billion worth of oil that has been fracked and pumped out of North Dakota alone.

Note: Jared Taylor has a timely new video in which he takes on the idea that “You Stole America From the Indianas.” I’m not sure if this video is related to the Slate story, but Lee’s research documents both when and how much the Indians were paid for their land.