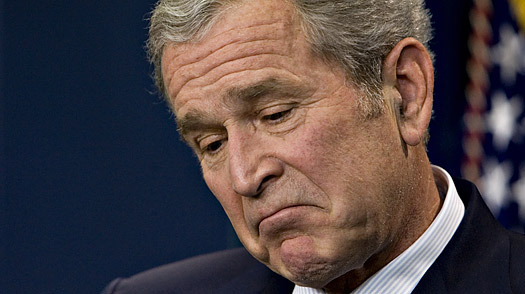 George Bush and the Political Homelessness of Neoconservatives

Neocons can only parse jihad as a form of fascism (which means “democracy” must be the answer). They don’t understand that it is a religious impulse over a thousand years-old to wage war against the infidel and make him convert, pay tribute, or die.

Former president George W. Bush came out of the family crypt this week to condemn  Donald Trump’s policies (which, ironically are corrections of the former’s failed ones). In an interview on NBC, the Texas oil painter and Israeli loyalist said:

Like many American elites, Bush expresses no understanding that not everyone worships by going to church five times a year and then going out for Applebee’s with their families. Some people worship by flying planes into buildings. Or plowing trucks through crowds. Or shooting up office holiday parties. The Enlightenment’s approach to Christian sectarian divisions that gave us first amendment has nothing to say about this, so neither does Bush in his “conservative” interpretation. There is a severe failure to adapt intellectually to changes in our world. Once a jihadist is in the United States, or on the way here, he has rights he didn’t have in Bush’s prisons in Iraq apparently. You know, because freedom. This is totally what the refusal to make one sect of Christianity the state religion as it had been in most of the colonies means.

Bush pats himself on the bloodstained back, adding: “You see, I understood right off the bat that this was an ideological conflict and people who murder the innocent are not religious people. They want to advance an ideology and we have faced those kind of ideologues in the past.”

Hmm. So Muslim terrorists are actually…  Nazis? Communists? Not Muslims? See this is the problem with neoconservatism. It’s ethnic roots as a Jewish ideology mean its adherents are only ever on the lookout for things that remind them of defunct forms of authoritarianism. Neocons can only parse jihad as a form of fascism (which means “democracy” must be the answer). They don’t understand that it is a religious impulse over a thousand years-old to wage war against the infidel and make him convert, pay tribute, or die.

Moving on to the next of Bush’s asinine viewpoints, when asked about the travel ban on several Muslim countries, he said “I am for an immigration policy that’s welcoming and upholds the law.”

The distinction between religion and ideology matters in the mewling jurisprudence of neocons. Rather than actually solving the issue, the neocon defenders of the right of terrorist-producing peoples to spread in the United States insist we can’t do anything to stop them along the lines of banning their entry (which the President has the authority to do, ban any class of foreigner), because then it becomes a ban on religion and religion is protected (apparently even for non-citizens).

Because neocons like Bush believe in compliance with the words and not the intent of the Constitution, they also think it would be wrong to infringe upon the religious “rights” of incoming Muslims in order to keep out jihadists. Invade the world, invite the world never felt so repulsive. Bush cheers for Muslim immigrants from the countries he destroyed.

The bad faith of neocon legalism is incredulous. How can one possibly separate jihad from Islam? Are we to believe these people are spiritual but not religious? The good news enough Americans didn’t buy into it and elected Trump.

This was a Republican nine years ago, and it is clear he is no longer one today.

There’s something chilling about the cause of the left’s old Bush Derangement Syndrome coming out of retirement to counter-signal the object of today’s leftist hysteria. You’d think, if Republicans were earnest about cries of party loyalty, that Bush would stand with the Trump administration in solidarity.

But really this is the best possible outcome. Bush is denouncing the Republican president and attempting to link arms with Team #NeverTrump, which aside from the legacy deep state and a minority of cucked Republicans consists of Democrats who viciously hate Bush anyway. They won’t take him in.

“I consider the media to be indispensable to democracy. That we need the media to hold people like me to account… I mean, power can be very addictive and it can be corrosive, and it’s important for the media to call to account people who abuse their power, whether it be here or elsewhere.”

Again he’s basically implying the real enemy is proto-Nazism or something. Also the media are the good guys. Liberal media conglomerates are your greatest ally. We’re hitting levels of neoconservatism that shouldn’t be possible.

But this is kind of new for the Republican party, moving right enough one of their living former presidents sounds like a Democrat. Counter-Buckleyism is something to behold. The old guard is being outed from the Overton window. When you compare where White House Chief Strategist Stephen Bannon and the ghost of President Bush stand on the media (or any issue), it’s truly mind-blowing how off the mark neocons are versus paleocons. Bannon is absolutely right that the media are “the opposition party.” Bush says they’re “essential to democracy.” How essential is it really to have a powerful faction working to delegitimize your elected government and turn public opinion against you? Has Bush forgotten how despised he was/is?

The creed that could be called My Enemies Are My Friends is losing ground fast. No Mr. Bush, Muslims and the media establishment are not on your side. The real question is, whose side are you on?

TopicsGeorge W. BushGOPneoconservatives
Share on FacebookShare on TwitterShare on RedditShare on VKontakte