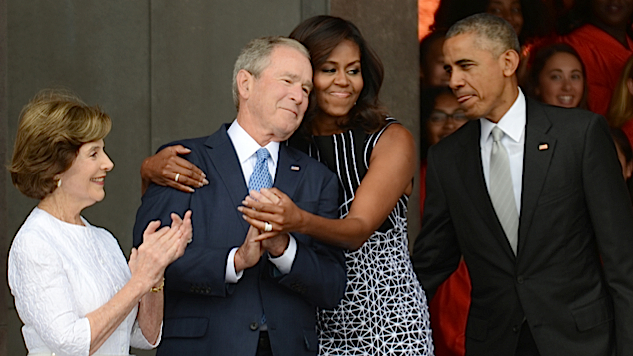 George W. Bush: “I Don’t Like The Racism” of Trump’s Presidency

Yesterday, Michael Cushman wrote about W.’s virtue signaling. I woke up this morning to the news that W. has expanded his attacks to accuse President Trump of “racism”:

“For eight years since leaving the White House, George W. Bush has refused to criticize publicly those who succeeded him, saying he didn’t want to make an already tough job any harder for President Obama and, now, President Trump.

But one rocky month into Trump’s tenure, it’s harder to keep quiet.

The couple list some of the center’s work that stands in contrast to Trump’s isolationism: immigration ceremonies, women’s reproductive-health programs in Africa, and leadership training for Muslim women that the Bush Center brings to Texas from the Middle East. Asked if Trump’s determination to restrict immigration and travel from Muslim countries threatens the Bush Center programs, he shrugs. “Now that you mention it, it might bother me but we’ll figure out how to bring them over.”

“There’s a lot of ways to speak out,” the former president says, “but it’s really through actions defending the values important to Laura and me. … We’re a blessed nation, and we ought to help others.” …

We’ve tried to explain this to reporters who have attributed the rise of the Alt-Right to Barack Obama and Donald Trump. Personally, I had already made up my mind about these issues years before Barack Obama was elected in 2008. When I was in college in the early 2000s, I hated George W. Bush’s warmongering. I hated his free-trade policies. Above all else, I hated his immigration policies. I hated his faux religiosity too. In fact, I disliked George W. Bush so much that I voted for Al Gore and John Kerry, not because I was a leftist, but because I was so alienated from mainstream conservatism.

George W. Bush symbolizes everything was wrong with the GOP before President Trump. He’s virtue signaling about “racism.” He’s sucking up to the Lügenpresse. He’s an open borders establishment neocon. He makes excuses for Islam while chastising Whites. I could continue, but I will just say that I am glad he is gone and we have closed the book on that type of “conservatism.”

Note: Laura Bush supports abortion and gay marriage and Barbara Bush is headlining an upcoming Planned Parenthood fundraiser. The “faith based initiative” was fake. Everything about the Bushes was fake and nothing more so than their social conservatism.