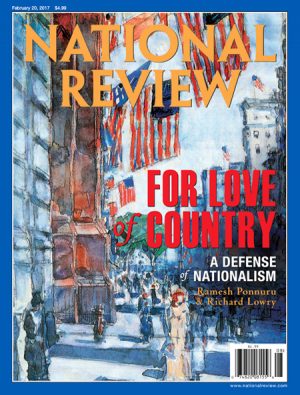 We Are The Vanguard

Peter Spiliakos has a really dumb blog post about us over at National Review:

“The fascination of liberal-leaning outlets with a fringe character like Richard Spencer is a cowardly attack on Trump voters. Liberal journalists focus on Spencer not because they want to understand why people voted for Trump but to marginalize and stigmatize people who did vote for him by associating them with a white nationalist they had never heard of. …”

Why is the media suddenly so interested in the Alt-Right and a “fringe character” like Richard Spencer? Let us review some of the reasons:

1.) If we are really so fringe on the Right, why is Dan Schneider denouncing us on the floor of CPAC? Why is the executive director of CPAC devoting so much time to making up fanciful stories and calling us out by name? If we were really so marginal, it wouldn’t be worth his time to publicize our movement now would it?

2.) The fact that National Review and CPAC are responding to us illustrates that they have lost their former power to police the Right, that a significant faction of the Right doesn’t even identify with antiquated movement conservatism and that young people increasingly don’t care what these cucks are saying in publications they don’t read.

3.) What is Trumpism? How is it different from movement conservatism? The primary reason the media is so interested in us is because it is our ideas that have entered the political mainstream. For years now, we have been the ones calling for an America First trade policy, an America First foreign policy, an American First immigration policy, rapprochement with Russia, scrapping the refugee resettlement program, stressing our interests as opposed to liberal ideology, strong borders and a crackdown on immigration, assaulting political correctness, making peace with the labor movement, etc., etc. We are the ones who have been writing about the Cathedral and how it operates to police discourse and homogenize thought.

4.) What has National Review been doing? It published the “Against Trump” issue on the eve of the Iowa Caucus. It spent the the whole primary season and general election attacking President Trump in an unsuccessful bid to stop him from winning the presidency. In contrast, the Alt-Right supported President Trump from the moment he announced his candidacy. There was the stillborn David French presidential bid. There was Jonah Goldberg endorsing Egg McMuffin. Do you remember the time Rich Lowry went on Megyn Kelly’s show to say that Carly Fiorina had cut President Trump’s balls off?

5.) Is there a better illustration of National Review‘s declining influence over the Right than this cover?

What a difference a year makes: pic.twitter.com/DgU1PsSNCA

6.) Let’s be honest with ourselves: the traditional cuckservative organs like National Review and The Weekly Standard now have less influence over the course of the Right than we do whether it is acknowledged or not. Their writers like David French and Peter Spiliakos are living in our world now. They are along for the ride. The tables have turned since a decade ago when these neocons led the country into the quagmire in the Middle East.

7.) CPAC doesn’t matter anymore because the “mainstream” is dead. For decades, you were “mainstream” on the Right if you were on television or if you were writing for some dead tree publication like National Review. Now, we are living in the digital world of social media and young people are watching us on YouTube and Periscope. They are interacting with us on Twitter. We don’t need the “mainstream” to network or spread our ideas. Every Millennial who decides he wants to be a Joe Sobran or Revilo Oliver has all the tools he needs to bypass and skewer National Review.

8.) Peter Spiliakos is writing for National Review. He has been certified as kosher by the “mainstream.” And yet, that doesn’t mean anything anymore. It doesn’t follow that his thoughts and ideas have any real influence over the Right. In the free market of social media, Paul Joseph Watson is a far more influential figure.

We are the vanguard now. The world has changed, the “mainstream” is dead and the media is trying to catch up with the times. Rich Lowry’s National Review and Bill Kristol’s The Weekly Standard are at the nadir of their influence over the Right. Ultimately, it doesn’t matter if flyover country conservatives are familiar with Richard Spencer and the Alt-Right. If our ideas are triumphing over David Frum’s ideas and Bill Kristol’s ideas, it doesn’t matter. If our discourse triumphs over and displaces “mainstream” discourse, then we are having a massive impact whether the “mainstream” cartel acknowledges it or not.