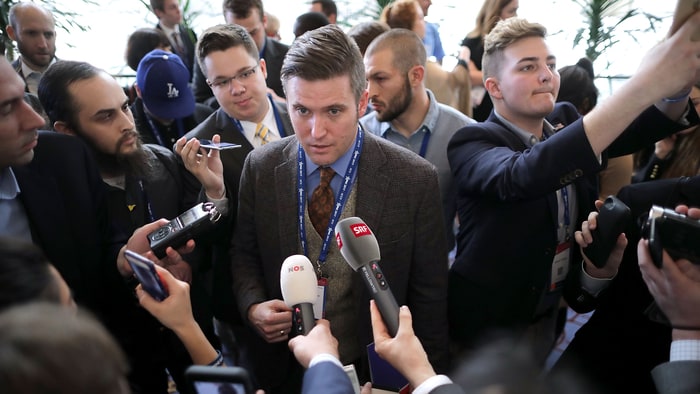 “Late the night before the annual Conservative Political Action Conference, Richard Spencer, the de facto leader of the white nationalist movement calling itself the Alt-Right, texts me to say he’ll be there – not to disrupt, he insists, but to ask questions after the “Anti-Alt-Right speeches on [the] main stage.” The next day, at the Gaylord Convention Center just outside of Washington, D.C., there is no Q&A, but Spencer, who gleefully attracts a throng of reporters everywhere he goes, holds forth outside the hotel ballroom. Dan Schneider, the executive director of the American Conservative Union, which hosts the conference, has just decried the Alt-Right as a “sinister organization that is trying to worm its way into our ranks.” Spencer denounces the speech as “stupid” and “pathetic.”

Inside the ballroom, four Republican governors are speaking about how they are “reclaiming America’s promise,” something reporters might have covered in years past to glean glimmers of presidential ambitions. But Trump – and his success at electrifying the Alt-Right – has changed all that. Instead, dozens of reporters cluster around Spencer, who most recently made headlines for eliciting Nazi salutes at a conference he hosted in November, and becoming the butt of a meme about whether it is acceptable to punch Nazis…”

If I were in that room, I would have fallen asleep listening to Scott Walker’s boilerplate. Conservatism is an antiquated ideology. I imagine it must have been exciting when National Review‘s audience was in their 30s and 40s. I was born in 1980 and only vaguely remember the Gipper. The reporters were correct to interview Richard Spencer. Who is interested in a story about movement conservatism?

“Spencer’s swift removal brought more attention to a presentation by a member of the ACU leadership Thursday morning that targeted the alt-right. During the event’s first speech, ACU Executive Director Dan Schneider sought to place the alt-right outside the bounds of acceptable GOP politics. …

“Dan Schneider has a small and closed mind,” Spencer told a group of reporters huddled outside the main event. “He didn’t even do basic research on what the alt-right is and he denounced it. That’s pretty pathetic. …”

As a Millennial attendee at CPAC said, Dan Schneider came across sounding like the school principal. The speech likely had the opposite effect. When you tell a crowd that there is a “sinister” force of politically incorrect rebels out there looking to corrupt movement conservatism, and it is hard to imagine a more boring group of people in politics, it only encourages more young people to check us out.

“NATIONAL HARBOR, Md.—On Thursday, white nationalist Richard Spencer was thrown out of the Conservative Political Action Conference. As security escorted him to the door, a college junior in a blue blazer and fashy haircut followed him. “I’m representing the alt-right club at Penn State,” said James O’Mailia, who then invited Spencer to come and speak. “Please come!” he said. “We’ll host you and everything …

Schneider referred specifically to the conference in November where Spencer, standing before a giddy crowd of clean-cut racists, gave a Nazi salute and said, “Heil Trump, heil our people, heil victory!” Schneider’s argument was similar to the one Jonah Goldberg made in his risible book Liberal Fascism: Fascists are inherently left-wing because they believe in government power. (Apparently this is true even when they’re hailing the government power to crush the left.) “Hateful left-wing fascists are not like anybody here,” Schneider said.

Even if you accept his absurd framing, what he said was wrong. Spencer himself—who, far from hijacking the term alt-right, actually coined it—was there watching from a seat near the stage. And it was clear that there were fellow travelers in the crowd. “There are lots of people here that I know,” Spencer told me after Schneider’s speech. Soon he was mobbed by journalists as well as by eager young conference goers who wanted to pose with him for selfies. One young man called out “Praise Kek!”—an alt-right in-joke. A guy named J.P. Sheehan pulled a T-shirt saying RADIX—the name of Spencer’s online journal—out of his bag, happily flashing it toward Spencer. “I know a lot of people are afraid of him, but Richard Spencer is like, the coolest guy,” he said. …”

Michelle Goldberg at Slate is averse to how dumb these people are who are the “mainstream” of movement conservatism. It has been a braindead movement for a decade now. She gets in a jab at Jonah Goldberg, a scholar of fascism and product of nepotism, who writes for National Review.

“On Thursday, one of the top officials behind the organization that puts together the annual Conservative Political Action Conference gave a speech in which he emphatically denounced the growing “alt-right” movement and then implied that it was somehow the work of liberals.

In one of the very first addresses to the conference, Dan Schneider, executive chairman of the American Conservative Union (ACU), denounced the far-right movement as a “sinister organization that is trying to worm its way into our ranks.

Hannity has stuck to this line of thought since Donald Trump’s victory. In December, he tweeted, “I never heard of ‘Alt right’ till the middle of the election.”

Plenty of grassroots conservatives appear to think the same thing. Here’s one example drawn from the comments on the Washington Times’ coverage of Schneider’s remarks, but many expressions of this nature can be found with minimal research …

That said, even if journalists refused to cover the alt-right, there’s no question that it is a real and growing political phenomenon that exists in large measure because American conservatism has become ideologically frozen in amber and essentially useless to anyone who was born after 1970. …”

I know from previous articles he has written at Salon that Matthew Sheffield reads Occidental Dissent. He also follows The Daily Stormer. Yes, the Sean Hannity line of attack on the “Alt-Radical Left” is a particularly dumb example of how movement conservatism is a braindead movement. The Alt-Right emerged in the early 2000s as a reaction to Sean Hannity’s cheerleading for the Iraq War.

“Like CPAC, the conservative movement faces a difficult choice. Many aspects of the alt-right, especially as articulated by outspoken figures like Spencer, are highly unpalatable to older right-wingers. Yet the alt-right clearly has momentum and is drawing fresh, youthful blood into the right. The current solution of accepting Bannon but rejecting Yiannopoulos and Spencer is a temporary compromise, one that is unlikely to last. Soon conservatism will have to face its moment of truth: Do they accept the alt-right as the future of American conservatism? …”

As President Trump has said, “this is the Republican Party, not the conservative party.” We’re not conservatives. We’re far more rightwing than those people. We like President Trump. We are his biggest supporters. The truth is that we are not really interested in being absorbed and coopted by movement conservatism which is an antiquated ideology of people who are afraid of their own shadow. They are incapable of addressing the real problems of the 21st century.

“Though Mr. Bannon has called Breitbart a platform for the alt-right, Mr. Schneider condemned the alt-right as “a sinister organization that is trying to worm its way into our ranks, and we must not be duped.” The alt-right, he asserted to a silent, half-empty room, is a “hate-filled left-wing fascist group” that “hijacked the very term.”

I keep returning to the analogy of the school principal. Schneider’s condemnation of the Alt-Right is like telling a classroom of students that marijuana isn’t cool and is bad for you.

“Yet there is also a palpable anxiety among some conservatives that their movement is being repealed and replaced with something more sinister. Yiannopolous lost his speaking slot for other reasons, but he has gleefully danced right up to the lines Richard Spencer long ago crossed — lines mainstream conservatives aged 40 and under especially thought had been inerasable since William F. Buckley Jr.’s purge of anti-Semites and other cranks. …

Real conservatives must build something much bigger than the alt-right to fill it.”

Baby Boomer conservatism will only continue to lose ground to the Alt-Right. Why?

It should have been obvious where this was going from the Ron Paul insurgencies in 2008 and 2012. There are more Millennial rightwing voters and fewer Baby Boomer conservatives every year. The average National Review subscriber is 66-years-old. The average Fox News views is 68-years-old. Why do you think Tucker Carlson Tonight is so popular?

The “base” of mainstream conservatism which made up its mind that Ronald Reagan was the greatest president of all time and that tax cuts are the solution to every problem is giving way to its successor. White Millennials grew up in a different time. We now have children of our own. In many parts of the United States, our children are being sent to public schools where they are a racial minority and, well, that is where racial idealism starts to lose ground to race realism.

White Millennials have grown up and are finding out how race pervades everything in America from education to employment to politics to culture to housing. The White minority public school system will be the death knell of movement conservatism.