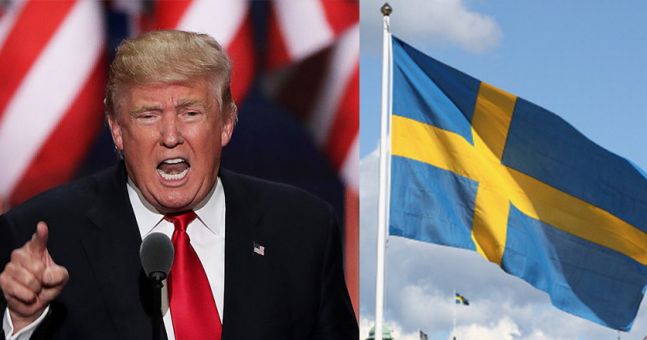 #SwedenAttack: The Truth About Sweden

President Trump has fired off two tweets in response to the media firestorm over his comments on Sweden at the rally in Melbourne. The Lügenpresse created a straw man that Trump was referring to a terrorist attack when he was really talking about the refugee crisis:

Give the public a break – The FAKE NEWS media is trying to say that large scale immigration in Sweden is working out just beautifully. NOT!

My statement as to what's happening in Sweden was in reference to a story that was broadcast on @FoxNews concerning immigrants & Sweden.

President Trump was similarly ridiculed by The New York Times when he predicted the Brussels terrorist attack in January 2016 two months in advance:

The mounting refugee crime crisis in Sweden has been a hot topic on the Alt-Right for several weeks now. It has actually been discussed in our circles for months, even years, but the Lügenpresse is scoffing at the notion that it is even an issue:

“LONDON — Swedes reacted with confusion, anger and ridicule on Sunday to a vague remark by President Trump that suggested that something terrible had occurred in their country.

During a campaign-style rally on Saturday in Florida, Mr. Trump issued a sharp if discursive attack on refugee policies in Europe, ticking off a list of places that have been hit by terrorists.

The New York Times published yet another story dismissing the reality of refugee crime in Sweden:

“LONDON — President Trump escalated his attack on Sweden’s migration policies on Monday, doubling down on his suggestion — based on a Fox News report — that refugees in the Scandinavian country were behind a surge in crime and terrorism.

Mr. Trump set off consternation and ridicule on Saturday when he seemed to falsely imply to an adoring throng at a rally in Florida that a terrorist attack had occurred in Sweden, which has admitted tens of thousands of refugees in recent years. …

“This is bad journalism,” Mr. Goranzon said. Mr. Horowitz did not respond to a request for comment.

Mr. Lofven, the prime minister, told the newspaper Expressen on Feb. 7 that Mr. Springare was exaggerating. “I have a hard time seeing that 100 percent of the police’s investigative capacity is occupied with crimes perpetrated by immigrants,” he said.”

This article is why President Trump calls them the FAKE NEWS media. The Social Democrats have plummeted in the polls.

A few weeks ago, Peter Springare, a policeman in Twitter, ignited a major controversy when he spoke out on Facebook about immigrant crime: 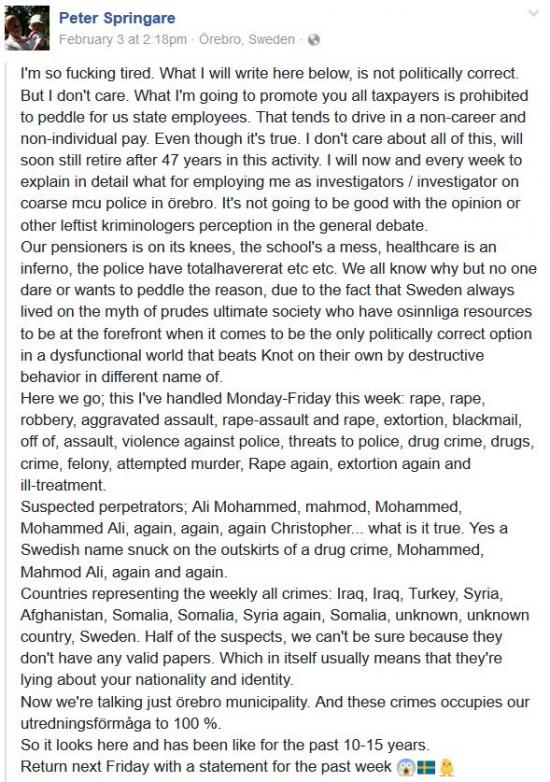 It was later announced that Springare is being investigated by the Swedish government. It has sparked a blossoming movement in Sweden called the Swedish Spring.

In The Case For Trump: Visibility, Eroding Taboos, Coming Out, I predicted last summer that Trump could set off these media firestorms with a simple tweet, which is one of the reasons why I voted for him. In his speech in Melbourne, FL, President Trump was referring to a segment on Tucker Carlson Tonight on refugee crime that had aired the previous night on FOX News:

I wrote about the sexual assaults at the Swedish music festivals.

A Swedish Facebook group supporting Peter Springare has swelled to over 175,000 members. Its members are giving flowers to Springare who is becoming a folk hero:

Here’s an excerpt from Ami Horowitz’s documentary Stockholm Syndrome in which he was assaulted and nearly killed while investigating a No-Go Zone:

Alex Jones recently interviewed a Swedish journalist on Infowars about Islam and the refugee crime crisis in Sweden. He says that modern liberalism is a Stockholm Syndrome suicide cult and that modern Swedish men have become cucked. This video was posted on February 9th:

Paul Joseph Watson made this video on refugee crime in Sweden in October 2016. He interviewed The Angry Foreigner about a recent incident in Sweden in which a wheelchair bound woman was gang raped by six refugees after asking for permission to use their toilet:

Feminists in Sweden actually protested the racism of drawing attention to that incident. Back in 2015, a group of refugees attempted to rape a Swedish woman on a train. At first she didn’t want to report them because she was afraid they would be deported back to the Middle East.

The Angry Foreigner has a brand new video out about Trump and Sweden:

Angry Swede published a video on February 8th about a Muslim who vaginally and anally raped a 13-year-old Swedish girl for an hour. He was sentenced to 2 months in prison.

Peter Sweden published a video on February 18th about the Swedish Spring:

Blondie has a new video in which she asks what will have to happen for Europeans to fight back:

In April 2012, I linked to this shocking video of a Swedish politician eating from a screaming African corpse cake. I said at the time it was “quite possibly the most anti-White, PC thing I have ever seen.” That episode was the embodiment of the bizarre, self-hating Stockholm Syndrome mentality of modern day Sweden which has generated the refugee crime crisis:

My friend Kyle Rogers made a YouTube video about who is responsible for Third World immigration in Sweden back in May 2013. It has accumulated 95,000 views:

Also in May 2013, Kyle Rogers made another video about Barbara Spectre and the Jewish role in fostering multiculturalism, political correctness and mass Third World immigration in Sweden. Spectre’s disturbing remarks stirred up a big controversy at the time in our community.

In May 2013, I shared a video of the refugees rioting in Stockholm for the fourth day in a row:

Saga’s “Ode to a Dying People” has never been more fitting: