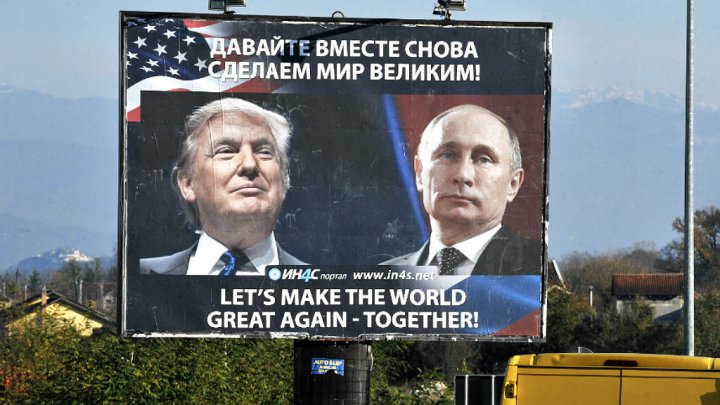 The author is the director of the Liberty Institute, a Russian think tank, and a senior official in the Motherland (Rodina) party, a conservative party represented in the Russian parliament. Translated by Vincent Law. Original article appeared at Russia Insider

The popularity of the new US president among Russian New Right patriots seems, at first glance, to be something of a paradoxical phenomenon. However it is in fact, a continuation of an old Russian custom. Russians have a tradition of taking foreign ideas concerning politics as their own, adapting them to Russia.

It all started back in the days of Prince Vladimir- (whose historical memory is experiencing a Renaissance in Russia.) Vladimir, for political, economic and military reasons, embraced the faith and order of the neighboring Byzantine Empire, laying the foundation for the future concept of a “Third Rome.” It was Vladimir who carried out large-scale social and political reforms, influenced by ideas taken (this time) from the East.

The next major political and social import came from the West. Peter the Great “opened a window into Europe” as the saying goes when he established the city of St. Petersburg. He immediately began importing Dutch and German culture into Russia.

Soon after, French influence began to influence Russian society. The Russian aristocratic class began to speak almost entirely in French. Even on the eve of the War of 1812, Napoleon Bonaparte enjoyed incredible popularity among the Russian officers that were arrayed against him. What is remarkable is that Napoleon was probably more popular then among Russians than Trump is now. But this did not prevent the Russian people from going out to stop Napoleon’s invasion and eventually going on to march all the way to Paris.

Moving along through history, the Decembrists in 1825 picked up many ideas from the French and American revolutions as a result of their time in the West after the defeat of Napoleon. Liberty, equality and fraternity; the republic and nationalism, populism and aristocracy. They eventually would go on to unsuccessfully lead an officer’s coup in Russia in the name of these principles.

Then of course came the events of 1917. The February Revolution was imbued with the spirit of both the French Revolution and the pathos of the English parliamentary system…even if the end result resembled neither. And the October Socialist Revolution bore the hallmark of German and American ideological strains (old Russian patriots in this case like to focus on the Jewish roots of the Bolshevik movement, but I’m putting that detail aside for now). The theory of the Bolsheviks was imported from Germany (Marx and Engels). And the pace of the public-political movement was borrowed from the United States. Trotsky admired America quite a bit, and believed that the revolution would not have been possible without America’s help.

Many Third Position philosophers in Europe considered the United States and the Soviet Union to be two sides to the same coin. They referred to both entities as “mondialist” (which is similar to the term “globalist” which is more in vogue now.)

Then came Gorbachev’s perestroika program and Yeltsin’s democratic reforms, where the Western model was imported wholesale to Russia- even if it was never quite fully adopted. During that period, even the Russian opposition youth movements tried to adopt Third Position ideas from the first half of the 20th century.

Therefore, the current Russian fascination with Trump and Le Pen is quite normal for Russia.  The American and French populist right-wing alternative movements serve as inspiration for Russian patriots just as previous historical movements have throughout all of Russia’s history. Only now, there is an interesting new element in the relationship. There is a mirror-effect where patriots in the West seem to have taken a great liking to President Putin as well. He seems to be especially popular among the so called “Alternative Right”.

We don’t yet know how Trumpism and Le-Penism will be adapted and adopted in Russia. But now it is clear from Trump’s victory, the potential success of Le Pen, and the rise of Eurosceptic parties all over Europe that things have finally started to go our way. All the signals from the West are clear to the Russian New Right. They read: “Alternatives exist and victory is possible.”

“Everything will change, right here and right now” – Trump said in his inaugural speech. He was speaking to the American people, but his message was heard loud and clear in Russia as well. To everyone in Russia, in whose veins “flows the red blood of patriots,” a new day has come.

The Alternative Right everywhere is ablaze with excitement at Trump’s victory.