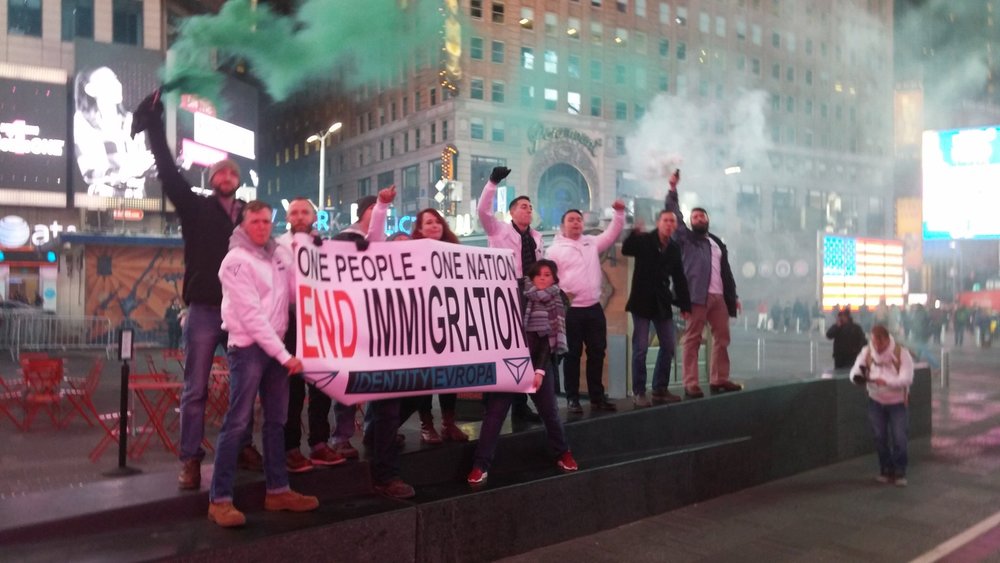 This is the next step forward for the Alt-Right:

“For a number of years, the alt right was mostly an online movement, with the exception of a few annual conferences held by American Renaissance and the National Policy Institute, two white supremacist organizations. Now its adherents are trying to meet, network, and plan actions in cities and on campuses around the county. Alt right groups have been plastering universities with fliers, meeting at forums and events in different parts of the country, organizing meet and greet gatherings, and, in the case of alt right leader Richard Spencer, planning a college tour across the country.

During 2016, alt right adherents spent a lot of time on the Internet trolling people they did not like, particularly Jewish journalists and public figures opposed to Donald Trump. They created and circulated racist and anti-Semitic memes and promoted Trump in graphics that were widely distributed online. With the media attention showered on the group due to their support of the Trump campaign, alt right adherents see the current time as ripe for real- world activity. …

At the same time that the New York Forum was taking place, there was a similar group of alt right adherents meeting in Atlanta for the first time at the Atlanta Forum. The two groups apparently exchanged greetings over the phone. People associated with “The Rebel Yell,” a podcast on TRS, as well as Michael Cushman, a Southern white supremacist, planned the Atlanta event.

Speakers included Hunter Wallace, the pseudonym for alt right personality Brad Griffin, who runs the Occidental Dissent blog and writes for altright.com, and Sam Dickson, an attorney and long-time white supremacist. Wallace claims that he will be hosting similar events in the Southeast. …”

There’s only so much we can do on the internet.

Lately, TRS has been holding pool parties and the Stormer is hosting book clubs across the United States. Identity Evropa recently engaged in some real world activism in Times Square in New York City. We also have people putting up posters and students who are starting White Student Unions on college campuses. Richard Spencer has The Dangerous White Heterosexual college speaking tour.

As the ADL notes here, we recently held the Atlanta Forum and New York Forum on the same weekend. Both events were a great success. In the months ahead, I will be hosting some private events in the South while Greg Johnson hosts private meetups in the Northwest. The first such meetup will probably be in Columbia, South Carolina to organize the Alt-Right in the Palmetto State. The next two meetups will likely be in Tallahassee, Florida and Birmingham, Alabama.

If the private meetups prove to be popular and successful, we can go from region to region in the same way we used to hold the public street demonstrations. It is not enough to educate our people with abstract ideas on the internet. In order for an individual to take the next step in the conversion process beyond the embrace of abstract ideas, real world social networks are needed to validate and affirm the new belief system of converts. Quite often, a convert is exchanging one value system and social network for a more agreeable and intellectually consistent one. Real world social networks provide a critical milieu for exploring taboo ideas with the support and fellowship of likeminded people. They make it easier for converts to overcome the deterrent of social stigma in their area.

I met both my wife and a ton of real world friends through the movement. I have lots of friends who met their wives in the same way. Many of us have children now. We know other couples in our area who share our worldview. I know people who share my values who live all over the South. I certainly don’t miss the atomization and social isolation of the George W. Bush years.

Note: Check out the posters below. We need to create Alt-Right student groups on our college campuses and chapters all over the country.

If you attend ASU, message us to get involved!#ProjectSiege #ASU @ASU pic.twitter.com/l99pvfJaV6

There is no stoping the siege! #ProjectSiege at @UW pic.twitter.com/H4gHObbuAA