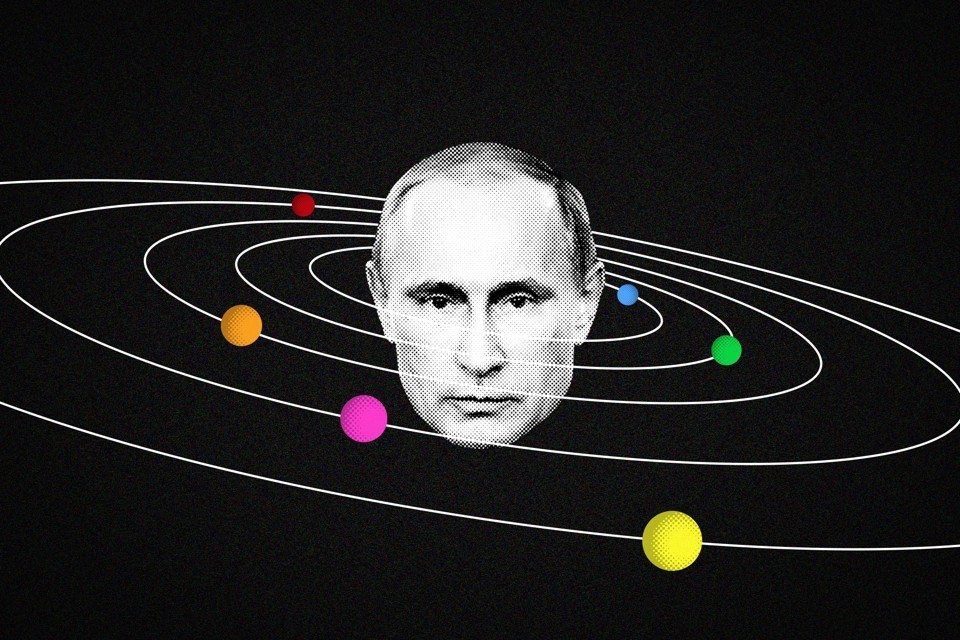 The Atlantic has a big story on how Vladimir Putin has positioned Russia on the side of the globalist nationalist and populist revolt:

“Putin had never spoken glowingly of the West, but grim pronouncements about its fate grew central to his rhetoric. He hurled splenetic attacks against the culturally decadent, spiritually desiccated “Euro-Atlantic.” He warned against the fetishization of tolerance and diversity. He described the West as “infertile and genderless,” while Russian propaganda derided Europe as “Gayropa.” At the heart of Putin’s case was an accusation of moral relativism. “We can see how many of the Euro-Atlantic countries are actually rejecting their roots, including the Christian values that constitute the basis of Western civilization,” he said at a conference in 2013. “They are denying moral principles and all traditional identities: national, cultural, religious, and even sexual … They are implementing policies that equate large families with same-sex partnerships, belief in God with the belief in Satan.” By succumbing to secularism, he noted on another occasion, the West was trending toward “chaotic darkness” and a “return to a primitive state.”

Few analysts grasped the potency such rhetoric would have beyond Russia. But right-wing leaders around the world—from Rodrigo Duterte in the Philippines to Nigel Farage in Britain to Donald Trump in the U.S.—now speak of Putin in heroic terms. Their fawning is often discounted, ascribed to under-the-table payments or other stealthy Russian efforts. These explanations don’t wholly account for Putin’s outsize stature, however. He has achieved this prominence because he anticipated the global populist revolt and helped give it ideological shape. With his apocalyptic critique of the West—which also plays on anxieties about Christendom’s supposedly limp response to Islamist terrorism—Putin has become a mascot of traditionalist resistance. …”

I think the writer senses how little Putin has to do with this.

1.) It’s not Putin’s fault that the United States is being transformed by its progressive elite into an Afro-Latino Third World country.

2.) It’s not Putin’s fault that the birthrate is so low in Western Europe.

3.) It’s not Putin’s fault that Angela Merkel let millions of Muslim refugees into Germany or that Brussels is transforming the European Union into Eurabia.

5.) It’s not Putin’s fault that Western elites have imposed their unpopular cult of political correctness on the laity.

6.) It’s not Putin’s fault that the Western clerisy has lost its traditional power to control the Narrative and set taboos because of the rise of social media.

7.) It’s not Putin’s fault that the West has lost its vitality and self-confidence and how its aging, dying populations are slipping into a long term economic malaise.

8.) It’s not Putin’s fault that the West now has to grapple with routine Islamic terrorist attacks as a result of its own liberalism, multiculturalism and political correctness.

9.) It’s not Putin’s fault that Americans believe their country is on the wrong track or that their children will be worse off in the future.

10.) It’s not Putin’s fault that there are Beached White Males and Boomerangs.

11.) It’s not Putin’s fault that antifas and Black Lives Matter routinely riot and create an atmosphere of chaos in our cities.

12.) It’s not Putin’s fault that social changes like gay marriage which have been forced on Western countries by judges have proven to be so divisive and unpopular.

The political class in the West has created this crisis. It has nothing whatsoever to do with Russia which is being scapegoated by an elite that is losing power. In fact, if Vladimir Putin had died of a heart attack years ago, the crisis would still be unfolding in all of its essentials.

These are all consequences of the progressive doctrine that “we” can be a universal ideology. It flows from the idea that race, ethnicity, culture, religion and other points of social solidarity can be jettisoned in favor of a desiccated humanitarianism. This is the world that utopian doctrine has called forth.

When Vladimir Putin is gone, this world will still be with us. We’re seeing the logic of that dangerous worldview work itself out toward its ultimate conclusion. Imagine where we would be today if our elites hadn’t chosen to destabilize and unravel the social fabric of the West.

Note: As George Fitzhugh said, this is the bitter fruit of political dreamers, speculative theorists, ideological fanatics and enthusiasts driven more by feeling than thought.