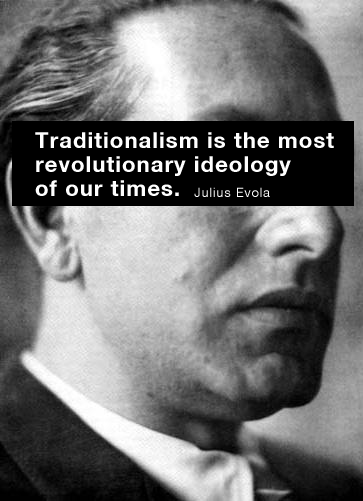 The New York Times in a profile behind the thought of President Trump’s chief strategist Stephen Bannon highlighted a thinker near and dear to many Alt Righters: Julius Evola.

Those trying to divine the roots of Stephen K. Bannon’s dark and at times apocalyptic worldview have repeatedly combed over a speech that Mr. Bannon, President Trump’s ideological guru, made in 2014 to a Vatican conference, where he expounded on Islam, populism and capitalism.

But for all the examination of those remarks, a passing reference by Mr. Bannon to an esoteric Italian philosopher has gone little noticed…

“The fact that Bannon even knows Evola is significant,” said Mark Sedgwick, a leading scholar of Traditionalists at Aarhus University in Denmark.

Evola, who died in 1974, wrote on everything from Eastern religions to the metaphysics of sex to alchemy. But he is best known as a leading proponent of Traditionalism, a worldview popular in far-right and alternative religious circles that believes progress and equality are poisonous illusions.

Evola became a darling of Italian Fascists, and Italy’s post-Fascist terrorists of the 1960s and 1970s looked to him as a spiritual and intellectual godfather.

More important for the current American administration, Evola also caught on in the United States with leaders of the alt-right movement, which Mr. Bannon nurtured as the head of Breitbart News and then helped harness for Mr. Trump.

“Julius Evola is one of the most fascinating men of the 20th century,” said Richard Spencer, the white nationalist leader who is a top figure in the alt-right movement, which has attracted white supremacists, racists and anti-immigrant elements.

In the days after the election, Mr. Spencer led a Washington alt-right conference in chants of “Hail Trump!” But he also invoked Evola’s idea of a prehistoric and pre-Christian spirituality — referring to the awakening of whites, whom he called the Children of the Sun.

Of course no American article on right wing ideas would be complete without a Russian conspiracy, The Times goes on to link Bannon, Evola, and Alexander Dugin.

As Mr. Bannon expounded on the intellectual motivations of the Russian president, Vladimir V. Putin, he mentioned “Julius Evola and different writers of the early 20th century who are really the supporters of what’s called the Traditionalist movement, which really eventually metastasized into Italian Fascism.”…

An intellectual descendant of Evola, Mr. Dugin has called for a “genuine, true, radically revolutionary, and consistent fascist fascism” and advocated a geography-based theory of “Eurasianism” — which has provided a philosophical framework for Mr. Putin’s expansionism and meddling in Western European politics.

Mr. Dugin sees European Traditionalists as needing Russia, and Mr. Putin, to defend them from the onslaught of Western liberal democracy, individual liberty, and materialism — all Evolian bête noirs…

We can’t say we don’t live in interesting times; past is prologue and the future is now!