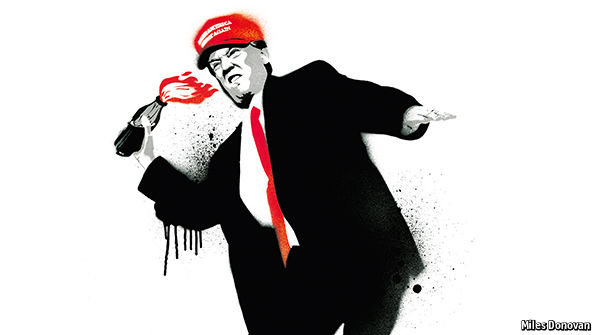 The Economist: An Insurgent In The White House

The globalists are reeling after two weeks of the Trump presidency:

“WASHINGTON is in the grip of a revolution. The bleak cadence of last month’s inauguration was still in the air when Donald Trump lobbed the first Molotov cocktail of policies and executive orders against the capital’s brilliant-white porticos. He has not stopped. Quitting the Trans-Pacific Partnership, demanding a renegotiation of NAFTA and a wall with Mexico, overhauling immigration, warming to Brexit-bound Britain and Russia, cooling to the European Union, defending torture, attacking the press: onward he and his people charged, leaving the wreckage of received opinion smouldering in their wake …

Without active American support and participation, the machinery of global co-operation could well fail. The World Trade Organisation would not be worthy of the name. The UN would fall into disuse. Countless treaties and conventions would be undermined. Although each one stands alone, together they form a system that binds America to its allies and projects its power across the world. Because habits of co-operation that were decades in the making cannot easily be put back together again, the harm would be lasting. In the spiral of distrust and recrimination, countries that are dissatisfied with the world will be tempted to change it—if necessary by force.

What to do? The first task is to limit the damage. There is little point in cutting Mr Trump off. Moderate Republicans and America’s allies need to tell him why Mr Bannon and his co-ideologues are wrong. …”

It has been an amazing month.

As everyone here knows, I was getting a bit black-pilled on President Trump in November and December. Overall, the Cabinet picks were a disappointment. The turnaround began when President Trump lit into ‘civil rights icon’ John Lewis. That’s what convinced me to attend the inauguration. You have no idea how long I have waited to see someone snatch the halo off of John Lewis.

I’ve been thrilled with what I have seen since then. There was killing the TPP! There was the federal charges against the antifas in DC and threatening to defund Berekley! There was The Wall! There was the Muslim ban! Yesterday, I was on the road in Florida, and I saw the tweets where President Trump was pummeling Federal Judge John Robart for usurping our sovereignty.

I turned and looked at my wife with our son in the backseat and said: one day we will be able to tell our grandchildren, there was President Trump standing like a stonewall. We’ve NEVER seen this kind of leadership from spineless conservatives. In my lifetime, only Judge Roy Moore comes to mind. Not since George Wallace in his prime have seen such defiance of “received opinion.”

I can imagine the conversations going on in barbershops all across Dixie. Did you hear President Trump stood up to that federal judge? Can you believe it?