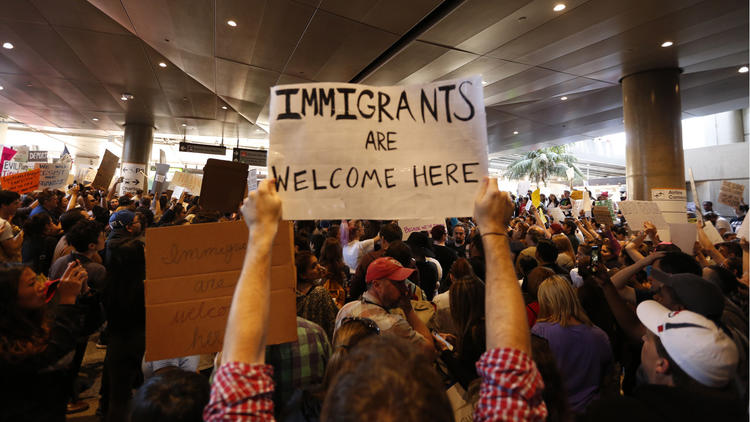 This hardly comes as a surprise, but a federal judge in Seattle blocked President Trump’s executive orders on immigration and refugees last night:

“A federal judge in Seattle issued a ruling that temporarily blocks President Donald Trump’s executive order on immigration and refugees, a decision that applies nationwide to tens of thousands of people holding visas to travel to the U.S.

A week ago, Mr. Trump signed an executive order suspending immigration from seven predominantly Muslim countries—Iran, Iraq, Libya, Somalia, Sudan, Syria and Yemen—for at least 90 days, calling it a needed move to keep terrorists from entering the U.S. It also froze the entire U.S. refugee program for four months, barred Syrians from entering as refugees indefinitely and cut the number of refugees the U.S. will accept in fiscal year 2017 to 50,000, less than half the number that former President Barack Obama called for this year. …”

When a country is no longer able to say who can, and who cannot , come in & out, especially for reasons of safety &.security – big trouble!

Interesting that certain Middle-Eastern countries agree with the ban. They know if certain people are allowed in it's death & destruction!

The opinion of this so-called judge, which essentially takes law-enforcement away from our country, is ridiculous and will be overturned!

God save the king!

As I told Professor Main, I am personally very sympathetic to monarchy. Congress has become nothing but a bunch of puppets of large donors. The federal courts, which are an even bigger disgrace, have issued rulings on everything from immigration to sodomy to abortion to gay marriage which make a mockery out of the concept of “representative government.”

I was already warming to monarchy when the Supreme Court issued its ruling on gay marriage. When 5 federal judges can unilaterally redefine such a core cultural institution that existed unmolested for thousands of years, we have entered new territory. In this case, the federal judge is asserting that as a sovereign country we no longer have the right to exclude foreign nationals.

If President Trump really admires President Andrew Jackson, he simply ought to ignore this order.

Update: President Trump unloaded with some more tweets this afternoon.

What is our country coming to when a judge can halt a Homeland Security travel ban and anyone, even with bad intentions, can come into U.S.?

Because the ban was lifted by a judge, many very bad and dangerous people may be pouring into our country. A terrible decision

Why aren't the lawyers looking at and using the Federal Court decision in Boston, which is at conflict with ridiculous lift ban decision?

The judge opens up our country to potential terrorists and others that do not have our best interests at heart. Bad people are very happy!